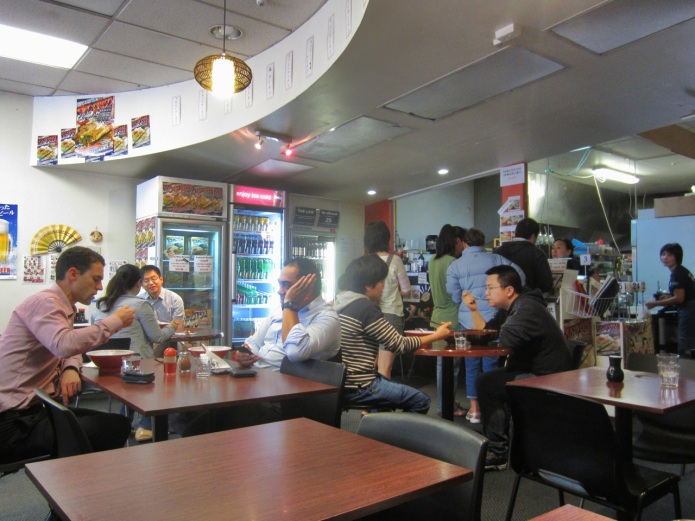 His first exposures to it were the dried, packaged quick-cooking kinds that come from Japan by way of the U.S., specifically, Sapporo Ichiban (original flavor) and Myojo Chukazanmai (miso flavor). Our care packages to Christchurch usually include these, and we were sure to bring a good supply with us on our current visit to New Zealand.

So, there was little surprise that he wanted to go straight to Samurai Bowl to have fresh ramen after he and my daughter picked us up and, a week later, his dad at Christchurch Airport. Two visits in eight days. The restaurant is quite popular among locals for offering Japanese food at affordable prices.

There are lots of things on the menu, including gyoza, donburi, sushi, salads, curries. Ramen is the most popular meal. The menu is overwhelming at first from the sheer number of things that can be ordered. Lots of pictures on the wall with descriptions added to the full frontal assault of possibilities vying for your attention. Add to this the monthly specials that are also posted at the counter and on the walls, and a cooler full of beverages, including beer.

Samurai Bowl also markets three kinds of packaged ramen, which it sells at the restaurant and various food outlets in Christchurch and other major cities throughout New Zealand.

All the ramen were good (☆☆☆), which is rather surprising for a restaurant with a big menu. The broths were full and tasty. The noodles were eggy and slightly thicker than usual, with good chew and generously portioned. All came with two slices of roasted pork belly, bean sprouts, seasoned bamboo shoots (menma), a square of nori and green onions. A soft-boiled egg (ajitsuke tamago) can be added for additional cost.

The original ramen is a pork and soy sauce flavored broth, which (judging from the menu) is not simply tonkotsu with soy sauce splashed in, but a less milky broth, but good enough to rate pretty well.

The miso ramen is my grandson’s favorite, which he shares with his mom.

The spicy ramen, Samurai’s most popular, is based on its pork broth, which was spicy though not unbearably. The broth’s distinct reddishness couldn’t possibly come from hot chiles alone, so it’s possible that it derives from kochujang, the relatively mild Korean chile paste. My sample’s egg was cold on the inside and the yolk congealed, a misstep straight from the refrigerator.

The spicy miso galbi-don that I had last year was less than impressive. Kara-age curry-don (☆☆) had a couple of problems. The most important was a curry sauce that was a tad sweet and had an overly ground coriander taste. The kara-age pieces were dry from over-frying, but they sure were crispy.

One would be tempted to conclude that donburi is not one of Samurai Bowl’s strong suits.

Maybe it might not matter so much when a customer can have a pretty good ramen experience.