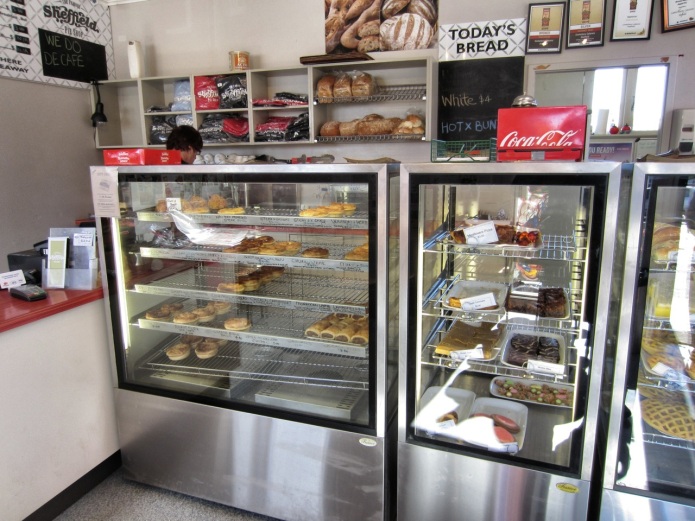 Meat pie is serious business in New Zealand, as it is in Australia. When one comes across a pie shop, it will specialize in meat pies, unlike in the U.S. where “pie” is synonymous with a crust filled with cooked fruit. Meat pie is so ubiquitous in NZ that it must surely be a national snack. It’s such an important adjunct to the Kiwi diet that an annual competition is staged for different categories of pie, including vegetarian—the Bakels Supreme Pie Awards.

One well regarded establishment, the Sheffield Pie Shop, is located in the small town of Sheffield along Highway 73, the major road that goes between Christchurch and Hokitika over the Southern Alps. Truckers take this route. Many stop at the shop to get a pie or two. We stopped there yesterday to pick up our lunches to have later at Castle Hill Scenic Reserve.

The shop is small, with very limited seating inside, a couple of small picnic tables outside. All the savory pies available for the day are displayed behind a glass case., several already sold out at almost noon, including steak and mushroom that I intended to get. I settled for mince (beef) pie. My wife preferred a sandwich instead.

The mince pie was quite good (☆☆☆), the mince, as ground beef is called down under, tender, moistened with an extremely savory gravy mixed with the right amount of tasty cheese (as cheddar is called). One bite and the filling oozed out and spread inside the paper sandwich bag.

Chicken tender sandwich with salad and satay was more tasty than it looked (☆☆☆). Battered and fried chicken was spread with a generous satay sauce that was interestingly tomatoey, sweet and tart, with peanut flavor. Kiwi touches included sliced hard-cooked eggs and cooked beetroot (as beet is called here), embellished with a slice of cheese, sliced cucumber and salad (as lettuce is called).