You hear a lot about the Southwest’s ancient cliff dwellings and wonder what they are about. What possessed the builders to create these permanent and elaborate structures in such inaccessible places? We ventured out to the most famous complex of them all, Mesa Verde National Park, to look at them first hand. To see these complexes up close is a remarkable experience. Fortunately, the warnings to expect huge crowds of tourists never materialized, in all likelihood because the peak season hadn’t quite begun yet.

The drive from Cortez or Mancos, the closest towns, to the park’s attractions is time-consuming. Past the park entrance, it’s another 14 miles and a climb to 8,000 ft on a winding road before reaching the visitors’ center. At the recommended speed limit, this takes about a half hour. If you plan to visit Mesa Verde for a few days and want to avoid this drive every day, my recommendation is to stay at the Far View Lodge in the park. We stayed in Mancos for the first night before getting a room at the Far View. Before moving, we had the good fortune of enjoying a wonderful breakfast at the Absolute Bakery in town.

Three of the ruins require advance ticket purchases ($3 per adult) and are led by park rangers. We were able to get on two tours (Cliff House and Balcony House). Long House is located in a section of the park that was closed due to staffing limitations, no doubt a reflection of the unfortunate budgetary constraints placed on our national park system.

Cliff House (top photo) is said to have 217 rooms and 23 kivas, making it the largest complex. As we wandered through here on the guided tour, we marveled at the size and sophistication of the architecture and the quality of the masonry. Though this and other ruins have endured since their construction in the 13th century, it’s sad that before their protection many artifacts were removed and many of the walls vandalized, some even knocked down, by thoughtless tourists.

Balcony House was built on a smaller scale than Cliff House. It has far fewer rooms, about 35 to 40 and is so named because of its preserved balcony. The other unique aspects of this tour are the modes of ingress and egress. To get to the ruins, you descend a 32-foot ladder that vertically scales the cliffside. And, in order to leave, you crawl on hands and knees through a tight space (claustrophobes beware!) and finally climb a 60-foot ladder.

Spruce Tree House is experienced on a self-guided tour (no charge) that features a kiva with a restored roof. It is the third largest complex with about 130 rooms and 8 kivas.

In Mesa Verde, it is possible to see the evolution of the types of community construction. The park’s various archaeological sites clearly show a progression from the sixth-century pithouses …

… to the more elaborate pithouses of the 8th- through 10th-centuries …

… to the final forms — the rooms, towers and kivas — for which the Puebloans are now famous.

Archaeologists are still not sure why the more elaborate structures were built in virtually inaccessible alcoves just below the mesa tops. Though there is evidence that people lived on the mesa tops, did conditions change during the 13th-century to force families to move to protected alcoves, a possible hint that warfare became more prominent? 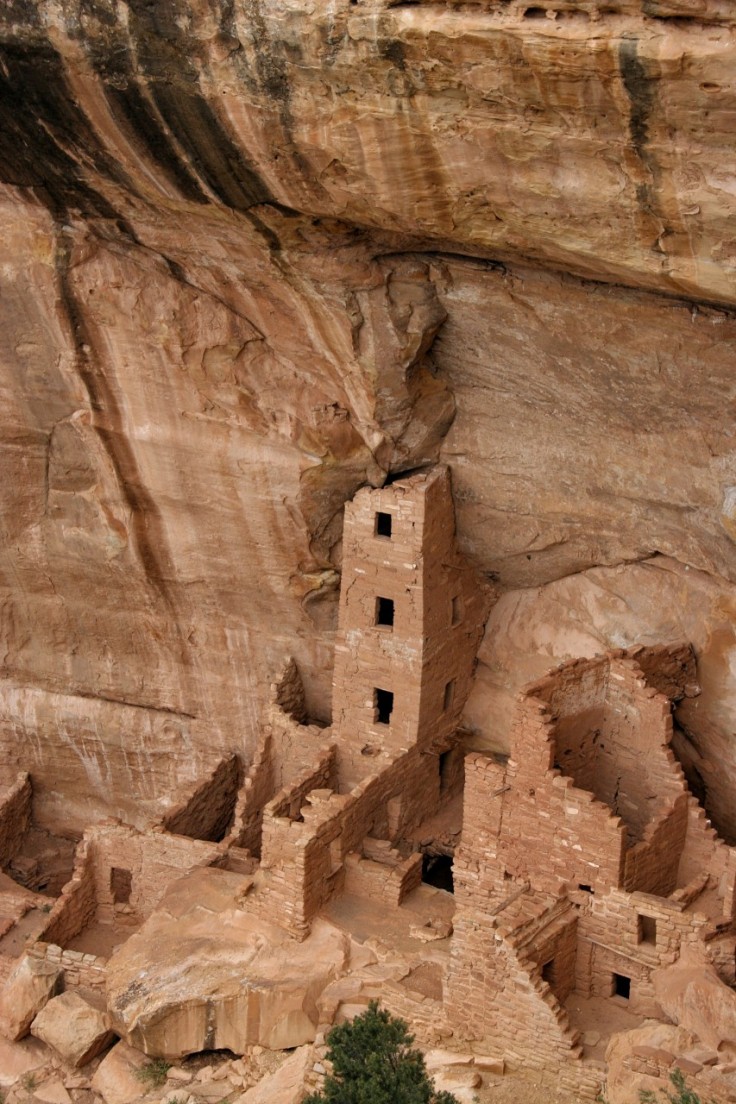 There are other mysteries, too. Why, for example, were many openings built T-shaped? One proffered explanation is to provide easy passage for people carrying loads on their backs, but really no one knows for sure.

And why were the axis-lines through the firepit, ventilator hole and sipapu aligned precisely south? To serve an astronomical function?

Incredibly, there are some 4,700 known archeological sites in the park.

The Puzzling Departure: No one knows for sure where the Ancient Puebloans went after they abandoned their cliff communities. The current thinking is that they migrated to lower ground and became the pueblo tribes of today. But the mystery of their departure remains. Although the theory of a serious drought has been popular, many archaeologists now have doubts that this is a viable single reason.

The emergence from an extinction event: You can’t help but be astonished that legends the world over tell of a series of catastrophic events that took place within recent human memory. Massive flooding, conflagrations, and extreme weather conditions are all described in tales that have been handed down orally for a very long time. The outlines of what took place are remarkably similar among all cultures. All of them describe the near extinction of humankind. The modern-day Native Americans, who include the Navajo, Hopi and Zuni, all have traditions that describe the survivors’ emergence into the present world after the catastrophe. The sipapu is a Hopi word for the “place of emergence” and is symbolically represented as a hole in the floor of all the kivas of the ancient Puebloans (for example, the hole at the bottom center of the very last photo above).