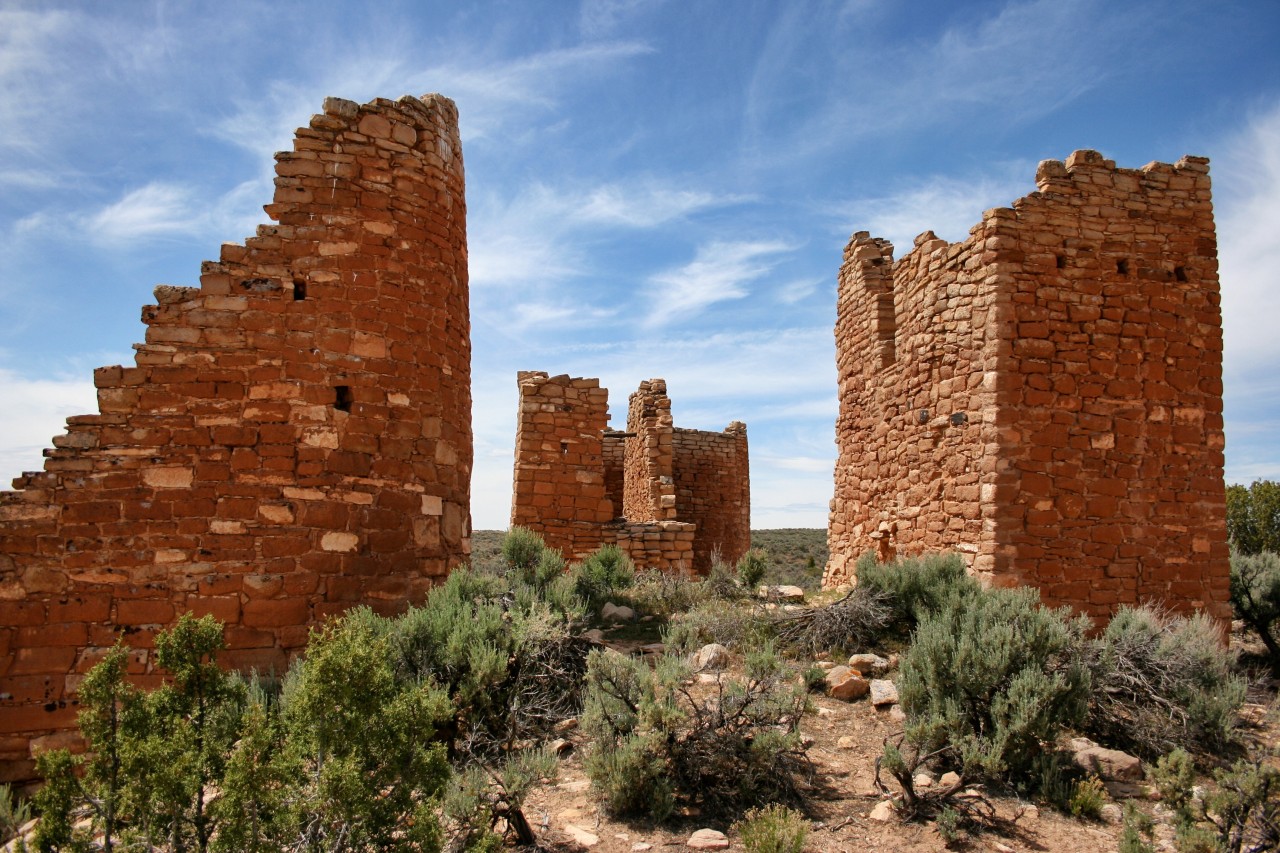 Not too far from Mesa Verde is a complex of ancient communities that was built at the headwaters of box canyons and situated in a remote area stretching across both Colorado and Utah—Hovenweep National Monument. We set aside a few hours to visit the monument en route to Blanding. We would have been able to spend more time here were it not for bogus directions by our GPS unit that led us to a back road far from the park entrance. While our Garmin guided us flawlessly throughout most of our trip, the lesson is not to rely solely on technology. After backtracking through Cortez, we got to Hovenweep the old-fashioned way — using a map.

With little time left in the day, the ranger at the visitors’ center recommended that we visit the Holly group of towers. But, to get there, with ranger-provided directions in hand, we had to find the correct unimproved road off Route 10 and drive in over 8 miles of rutted, washboarded dirt road to reach the trailhead.

Much of what remains in Hovenweep National Monument are multi-storied towers, similar to those on display at Mesa Verde. Like all ancient ruins throughout the Southwest, their placement on sites normally unsuitable for habitation puzzles archaeologists. They speculate that they served defensive purposes based on the small sizes of their windows (almost like peepholes) and tight entry portals. A curious architectural variation here is that many towers have a “D”-shaped cross-section for reasons unknown. It seems logical that because these complexes were built next to seeps or natural springs in this generally arid environment, it would be reason enough to defend them against competitors at a time when an extended drought plagued the region.

A few towers were built on the most inexplicable foundations, such as on top of huge boulders or irregular rock slabs. Boulder House is one example. In fact, one tower was erected on an immense boulder that probably fell eons ago.

The trail connects to the one featuring the Horseshoe and Hackberry groups. The Twin Towers are notable for their elaborate masonry and respective shapes, one like a “D” and the other an oval.

Of all the beautiful flora we saw in the wild, the most spectacular had to be the claret cup cactus (also known as the hedgehog cactus). It is the most photographed cactus in the Southwest for its splendid scarlet color that can easily be spotted along the trails. Hummingbirds, primary pollinators of the claret cup, get their heads covered with pollen when reaching the nectar deep inside the flower. The finest example we came across was here in Hovenweep, a single cluster that immediately caught our eye. Since the flowers only last for a few days, we were lucky to have seen a few.