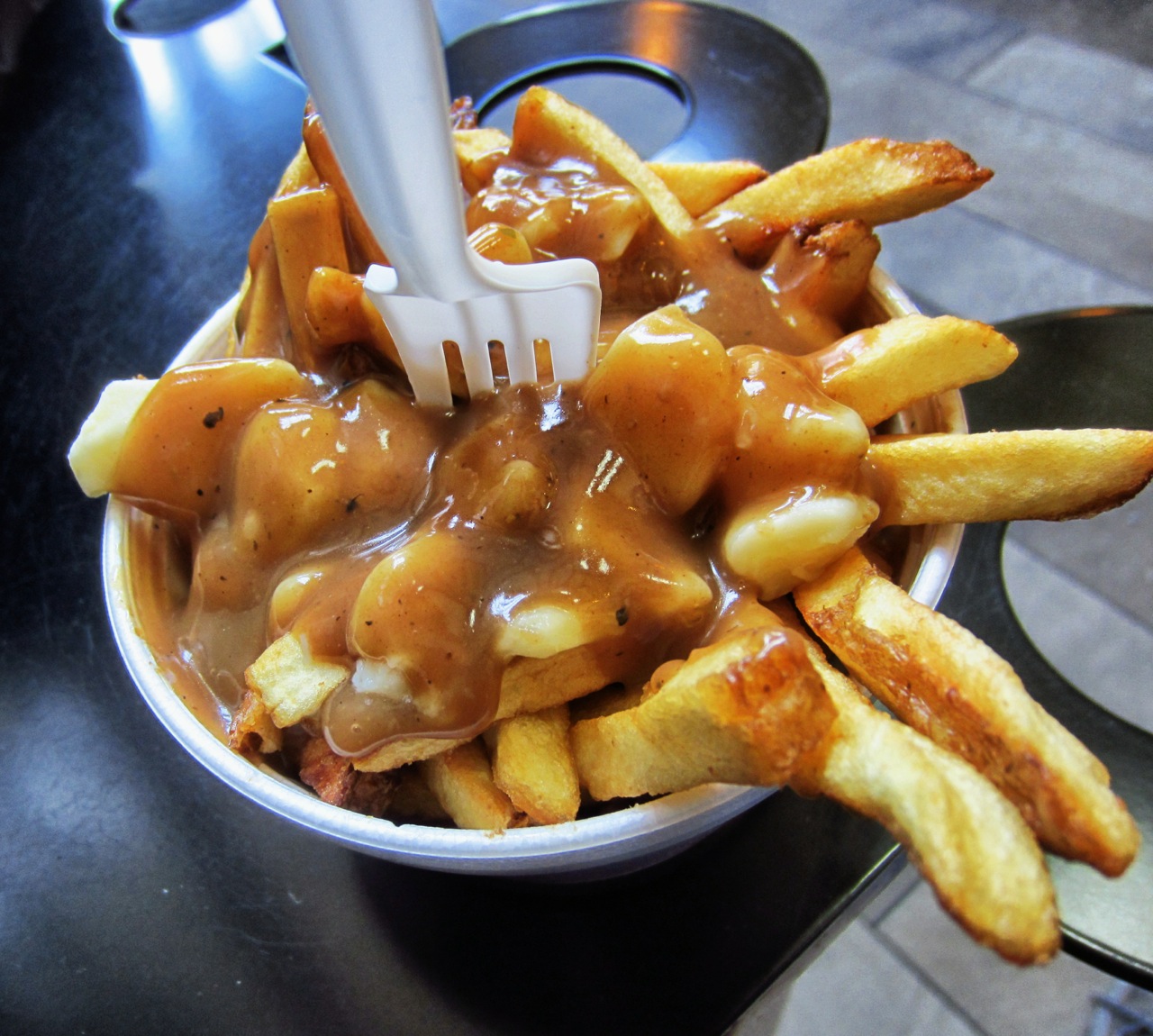 In a city known for its international cuisine, including my personal favorites of Japanese izakaya and ramen and Chinese restaurants in nearby Richmond worthy of Hong Kong, I’ve come across really tasty examples of not local (i.e., Northwest) food but grub transplanted from Montreal.

No doubt you’ve heard of poutine, the Québécois fast-food combination of French fries, cheese curds and gravy. At first, the thought of it wasn’t all that appealing to me, but then I realized that Yanks drench their fries in ketchup, chili or even melted cheese, so the concept of smothering fried potatoes with sauce is not just a Canadian thing. Over a year ago, I had very good poutine at Fritz European Fry House in Vancouver, judged mainly on its gravy, a deeply satisfying, savory bombshell. There were a few hiccups.  Starting off very crispy, the fries softened under all that hot gravy and the cheese curds melted and became stringy.

While in town again, I was looking at a Vancity internet map last month when I noticed another poutinerie (that also sells hot dogs) only blocks from our hotel. Mean Poutine is only a counter operation on Nelson near Granville. There is nowhere to sit though you can stand and eat at the counter. My wife got a single order for takeaway and brought it back to our room. I didn’t see any visible gravy, though the fries were clearly wet. I thought it odd that it seemed to have disappeared, more like dissolved into the potatoes. The fries were cut thinner than Fritz’s but they were superior, having a double-fried texture and a very thin batter that gave them an appealing crunchiness. The curds also kept their shape. An interesting twist, one which I liked, was the addition of sliced green onions.

Many Canadians eat these snacks late at night, which explains why Fritz is open until 2am-4am, depending on day of the week, and Mean Poutine until 4am. This is not a good idea if you’re trying to keep the poundage off.

Great bagels on the West Coast are hard to find. The ones here tend to be softer than their East Coast counterparts, verging on being bread-like. I’ve heard East Coasters complain about western bagels. In college in L.A., I had a Jewish buddy from New Jersey who more than once made the same claim. And so did Joel Siegel when he moved from Montreal to Vancouver. He decided to open Siegel’s Bagels in 1990. He incorporated his vast experience that he accumulated while working at a Montreal bagel shop. The bagels would be boiled in a kettle, baked on shivas in a 25-ton wood-burning stone-hearth oven. At the original Kitsilano location and the newer one on Granville Island, you can watch them being made.

Siegel’s bagels are seriously good. The bagel can by itself be an object of meditation: what the perfect one should be like. They have the requisite crispy exterior, a chewy inside and modest size that make almost all bagels I’ve had before pale in comparison. Lack of added salt also makes Montreal bagels taste sweet. For me, they find their greatest expression in the form of Siegel’s signature Montreal smoked meat sandwich on a sesame bagel. Siegel’s has not only transplanted the quintessential Montreal-style bagel to Vancouver, it also imports (weekly) smoked brisket from Montreal, which is then thinly sliced and heated in-house in portion steamers. All that’s needed is a slathering of plain yellow mustard to complete a whole that is greater than its parts, at once chewy, crispy, nutty, salty, sweet, tart and savory in perfect balance. The whole thing yields to nearly effortless bites, never a jaw-tiring or sandwich-deforming exercise that denser bread would produce.

Vancouver is lucky to have a taste of Montreal in its own backyard, and so am I with only a three-hour drive away.