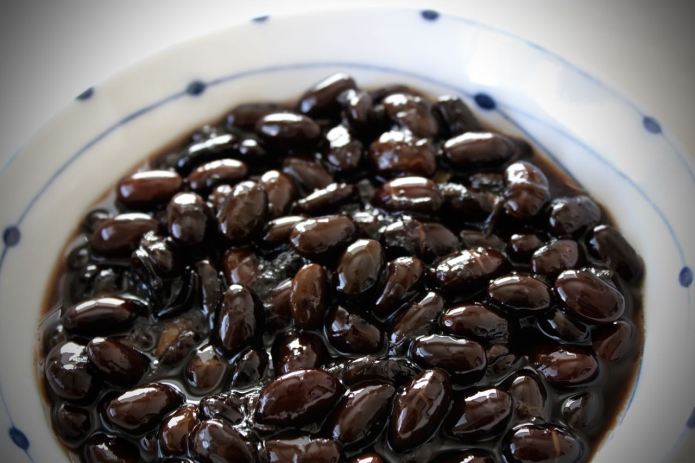 My father-in-law passed away earlier this year.

Beloved patriarch of the family, he lived to be just shy of 99 years. Dad was a very intelligent man, alert to the end, avid sports fan, gardener, tinkerer who had a knack for doing things instinctively. He grew a bounty of vegetables in soil amended with compost he created from kitchen scraps and yard waste. Where most people his age are intimidated by electronic gear, he cobbled together a Rube Goldberg system of interconnecting multiple TV sets, VCR, satellite TV and DVR recorder that suited his needs. Using a plethora of remotes was trifling to him. Dad also was a tinkerer in the kitchen, not once referring to any recipe that I ever saw. He cooked by feel, instinct, always the experimenter. He’s the kind of cook who sticks a finger in a sauce to taste before making adjustments and rarely used measures. He was ever pickling vegetables (tsukemono). Come oshogatsu, he played just as active a part in preparing osechi-ryori as anyone.

Now that he’s gone, things were not the same. The family profoundly felt his absence. Osechi-ryori, the preparation of the New Year repast, and oshogatsu were important to him, more than any other holiday.

Every family member will tell you that his barbecued pork and chicken wings were the best. These additions to our osechi-ryori reflect our assimilation into the American culinary melting pot, and no one did them better than dad.

One of the traditional dishes he always made was kuromame. I decided to do them in his stead. I never asked about or watched him make this dish. I did observe that he never fussed with the beans (meaning they had to be pretty much left alone) and cooked them very gently, at almost a bare simmer. Other than that, I was on my own. I did what anyone else would do these days—searched the internet for recipes. 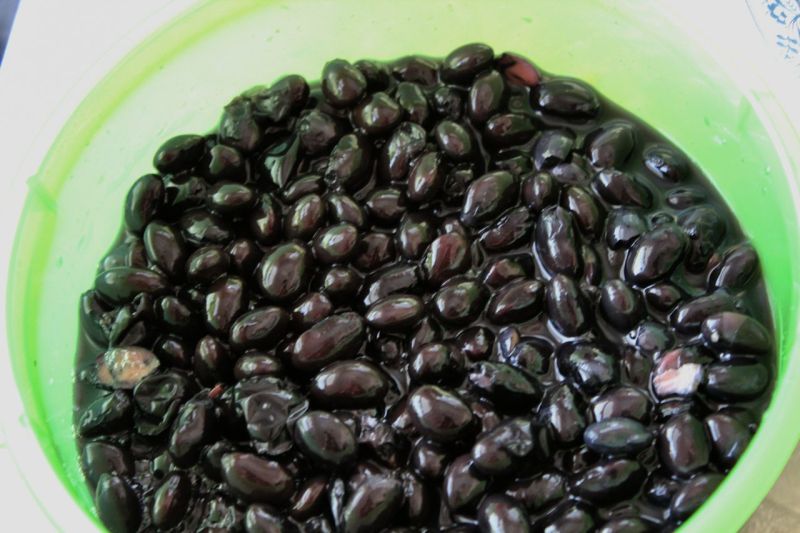 First, I had to find the right beans. Kuromame are a soy bean cultivar, prized for depth of flavor and tenderness and are not what we here regard as dried black (turtle) beans. When I first started on this endeavor, I thought I’d change things up a little by making sweet black beans in the Korean style (kongjaban), which I enjoy as part of banchan. Kongjaban are small, firm but not crunchy. I found small black beans at 99 Ranch Market (the package even had some hangul labeling). While they tasted fine, they were an aesthetic disaster, the skins having sloughed off most of the beans. Dad would have winced at the presentation. I gathered these little beans weren’t suited to kuromame’s long soaking and cooking times. In the end, I decided to use the ‘right’ beans, stick to tradition and strive for authenticity—glossy black, wrinkle-free and tender beans.

The most prized beans come from the Tamba region near Kyoto. Spherical when dry, they have the purported advantage of being sweet and maintaining tenderness without getting mushy, even through long cooking times. But they command steep prices. A small 150g (5oz) package costs $10. These must have been the beans dad decided were too expensive during one pre-osechi shopping trip. Fortunately, there are cheaper alternatives, including one marketed by JFC, which I purchased. They were bean-shaped, not round.

One ideal is to make the beans as black as possible. Somewhere along the line, someone discovered that cooking them with rusty nails made the beans darker. Dad said he used them once or twice. The reaction between iron oxide and tannin (in the beans) is responsible for the chemical sleight-of-hand, not unlike the ancient process for making black dyes. Nowadays, cooks seem wary of adding ‘rust’ to their food, so they do without. Cooking the beans in a cast-iron pan supposedly does the same thing, but at the risk of picking up off-flavors from previous use unless the pan is scrupulously cleaned. Some cooks instead add baking soda to the soak, a metallic salt that does something similar. That’s what I settled on, too. The beans have to soak for a good 10-12 hours.

Adding kombu seemed in keeping with traditional Japanese cooking methods, though its inclusion in kuromame is optional. The dried kelp is used in a lot of Japanese cooking and is an essential part of the broth called dashi. My sister-in-law thinks her father used it occasionally in his black beans, so I decided to include it, too.

The long cooking over two hours required constant attention. Every 15 minutes or so as needed, there was skimming of foam, making sure that the broth was kept at a bare simmer, adding water, much as what dad did. To guarantee wrinkle-free beans, which requires that the beans always be submerged in liquid, I used a wooden drop-lid (otoshibuta).

My beans came out decently. They weren’t the ideal jet black. Some skins split but the beans were glossy and pleasantly tender. After long simmering, the kombu completely dissolved to impart a slimy viscosity that didn’t suit some family members and made the broth too lumpy.

The making of kuromame this year was an attempt to fill a gap left by my father-in-law’s passing. Replicating his recipe was not the important thing so much as the act of making them, the observance and continuation of a family tradition, which was important to him. I’ll tinker with the recipe next year to improve it. I might even add a rusty nail or two.