Soft tacos are such a popular snack in Mexico that it was inevitable that they should make an appearance across the border. This has been a relatively recent phenomenon because the Mexican restaurants of yesteryear—at least the ones I frequented in Southern California—usually served tacos with crispy, fried shells and ground beef fillings. I have to wonder if ground beef fillings are common down south at all, if they have roots in ground-beef-anything so popular here in the U.S., promoted by the likes of Taco Bell, than something having originated in Mexico, which favors shredded beef instead. Certain fillings for tacos may never materialize here. Friends of mine who just returned from a trip to Mexico were ecstatic over shark tacos in Ensenada, while other friends couldn’t get enough lobster tacos near Cabo San Lucas. For the soft taco to be successful, freshly made corn tortillas are a must and that is what taquerias are making nowadays.

Taqueria El Rinconsito is a chain here in Washington state, currently at thirteen locations. The one here in Bellevue is tucked away in a strip mall far removed from the commercial core. Despite its isolation, there was a huge crowd of people at lunchtime, a scene also common in the Auburn location, according to my friend who lives there and had lunch with me today. Though their specialty is tacos, there are other things on the menu, not only familiars like burritos, enchiladas and flautas, but items you don’t find on many Mexican menus: tortas, gorditos, sopitos, mulitos, birria, menudo (on Saturdays only), seafood cocktails, and more. Visible behind the order counter was a big ball of masa from which the tortillas were being made.

And the nicest touch is that beverages that are gratis with many meals also include bottomless aguas frescas—five different kinds: tamarind, hibiscus, horchata, guava and (my personal favorite) canteloupe, all of them with a bit too much added sweetener. But, damn, are they refreshing! 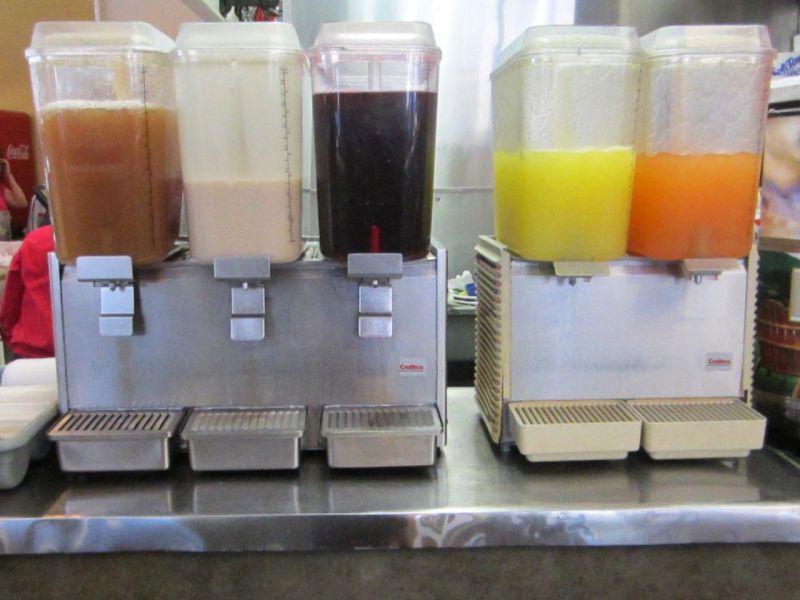 Most taquerias nowadays have a salsa/condiments bar. Rinconsito is no exception. Among the salsas I sampled, I was most impressed by a salsa roja made with smoked chiles, possibly chipotle. 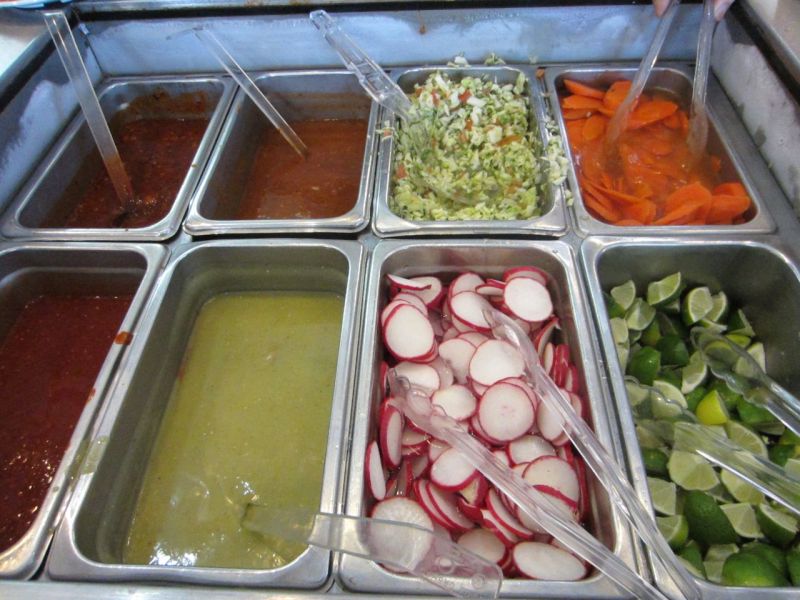 As this was my first time, I went straight for the tacos, their specialty, which you can order in quantities of three, four or five. Lest you think five are excessive, these are very small tacos. A taco plate gives you three tacos, rice and beans. You have your choice of five different meat fillings: asada, adobada, lengua (tongue), chicken and carnitas, the last two of which I split between three tacos. The chicken was chopped into small pieces and rather bland. Though not the best version I’ve had, the carnitas were tender and flavorful. Refried beans were authentically lardy, smooth, salty and the rice was perfectly cooked. 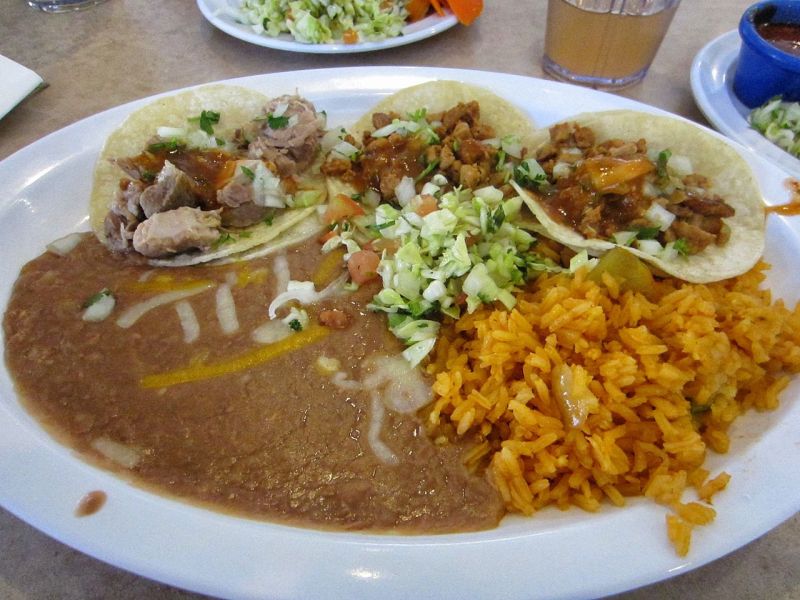 The prices here are very reasonable; you could even say cheap. It’s worth a repeat visit to try some of the other menu items, if for no other reason than to have the aguas frescas again.