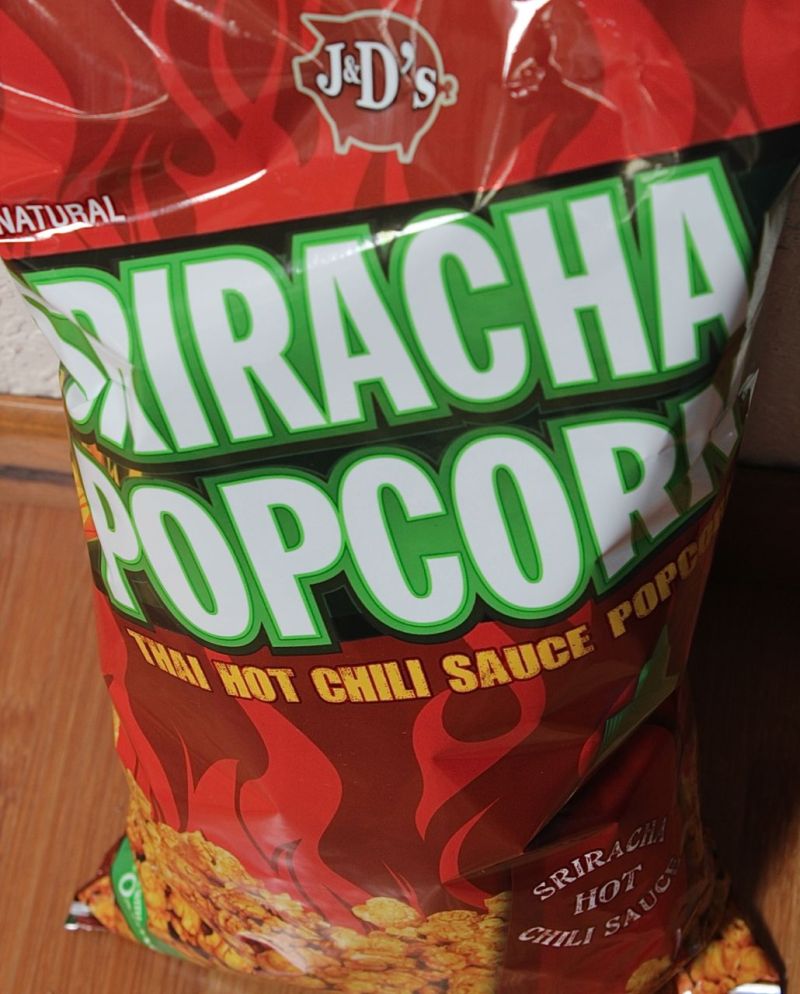 My wife was the first to notice this product at the Bellevue Uwajimaya—sriracha popcorn.

Whoa! My favorite movie snack combined with my favorite hot sauce? Could I resist? One guess. Here was another innovative snack that intruded into my life after stumbling upon furikake potato chips.

If you’re a chilihead (or more properly, chilehead) and even if you’re not, you’ve probably noticed the ubiquity of Huy Fong sriracha sauce, more commonly known as Rooster Sauce. Made in Rosemead, California, far from Thailand from where sriracha originates, the bottle is found as a condiment in so many restaurants that it should be giving ketchup a run for its money. It’s basically a spicy sauce made from red chiles, vinegar, garlic, salt and sugar. Some people put it on almost everything they eat. I love it, but I use it only on foods that it complements, while other foods call for Huy Fong’s other, more vinegary chile sauce, sambal oelek, that had its origin in Indonesia. A little mixed in with ketchup is, for me, a great way to polish off fries. Ditto with hash browns.

In a stroke of inspiration, J&D’s Down Home Enterprises, a local Seattle company and maker of the popular Baconnaise and potentially even more popular Baconlube, in partnership with a company called The Oatmeal (which in its twisted way also adores Rooster sriracha), combined the essential ingredients of Rooster sauce with popcorn to come up with a good snack. If it were just plain spicy, it might only motivate chiliheads, but the addition of the right amount of sugar makes it appealing to a broader public. It has garlicky flavor and good heat but not enough to blister the tongue or strip a cast-iron stomach. The only defect is one that plagues all packaged popcorns—lots of popcorn bits at the bottom of the bag that are the spawn of rough handling.