Camped at the Perseus site 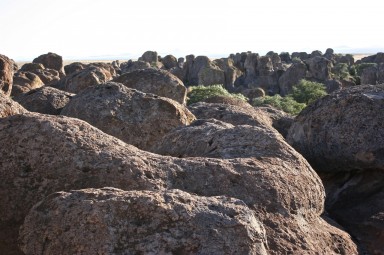 Our final night of camping on this road trip was spent at City of Rocks State Park, north of Deming in the middle of the Chihuahuan desert, a unique, surreally beautiful area where every campsite is nestled among huge boulders.

City of Rocks features a wide field of boulders created 35 million years ago when a volcanic eruption from the Emory Caldera rained down tuff that hardened and was eroded by wind and water over millions of years. Some of these rocks are 40 feet high and are quite beautiful, ignimbrites of pinks, blue-grays, and browns, and strewn over 1,200 acres in the middle of the Mimbres valley, an odd sight in an otherwise flat and featureless terrain. Some of these upright megaliths reminded me of Stonehenge, but mostly they are randomly scattered, sometimes forming lanes between them that suggest urban pathways. The park also includes an astronomical observatory (one of two in the New Mexico state park system) that has a 14″ telescope. Keeping with the astronomical theme, the various sections of the park, arranged in loops, are named after constellations.

At night, without light pollution, dark-night-sky viewing is possible. On the night of our stay, the skies were clear; we might’ve seen the Milky Way as we did at Chaco Canyon if it weren’t for a bright full moon. We heard coyotes howling overnight and in the early morning.

Among the many desert plants here, the ocotillo stood out as the most unusual, tall and cactus-like with near vertical stems branching at ground-level and spiny appendages all along them. For most of the year, they can appear to be dead, but we were fortunate to have seen them fully leafed out and topped with crimson flowers, a direct result of prior rains.

Too bad we were in a rush to get to the Grand Canyon. This is a campground worthy of a longer stay.