In 2009, we avoided it because of its remoteness and the difficulty of getting there on unpaved roads. This time, we reversed course and decided to visit Chaco Culture National Historic Park (a mouthful, but it used to be called Chaco Canyon National Monument). This is the mother lode of all ancient Puebloan ruins, having begun building early in the 9th century and thought to have served as a major crossroads to travel and trade with peoples as far away as Mesoamerica. It is one of the cultural and archaeological treasures of the National Park Service, yet no plans, let alone funds, have been drawn up to improve access or facilities. Is this a good thing or bad? Making it easier for more tourists to come—and come they will if given the chance—would certainly have a major impact. With only a small campground for overnight stays, the vast majority of travelers can only make this a day visit. Still, visitors come from all over the world.

During my Southwest trip-planning, I made sure to secure a campsite in advance. 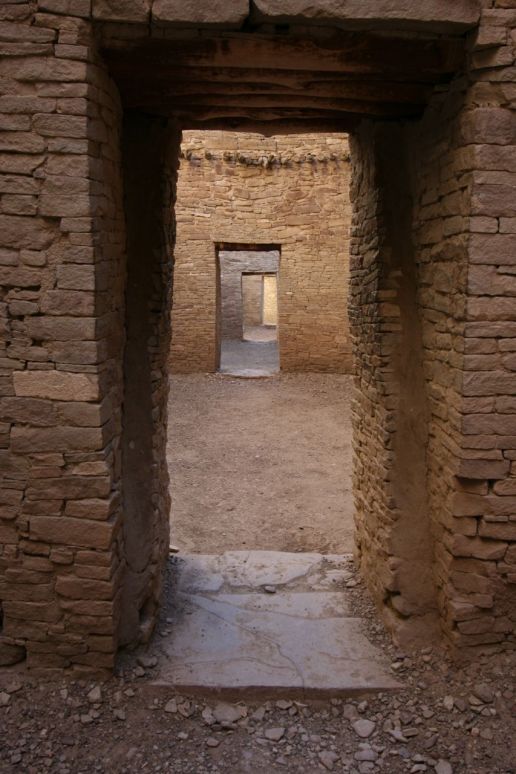 The most-photographed alignment in Chaco

Chaco boasts the largest preserved series of ancient Puebloan complexes. The architectural achievements alone are enough to marvel at. The scale and detail of the masonry are impressive. Five distinct styles can be seen that evolved over centuries, all using stone tools, eventually developing into a matrix of large sandstone blocks chinked with smaller stones set in mortar. To support the multi-levels above, the walls of some structures were built a yard thick at the base, then tapering as they went upward. Chaco shows signs that it had connections with civilizations as far south as Mesoamerica in some architectural influences, which means there must have been considerable travel and sharing of ideas over vast distances. 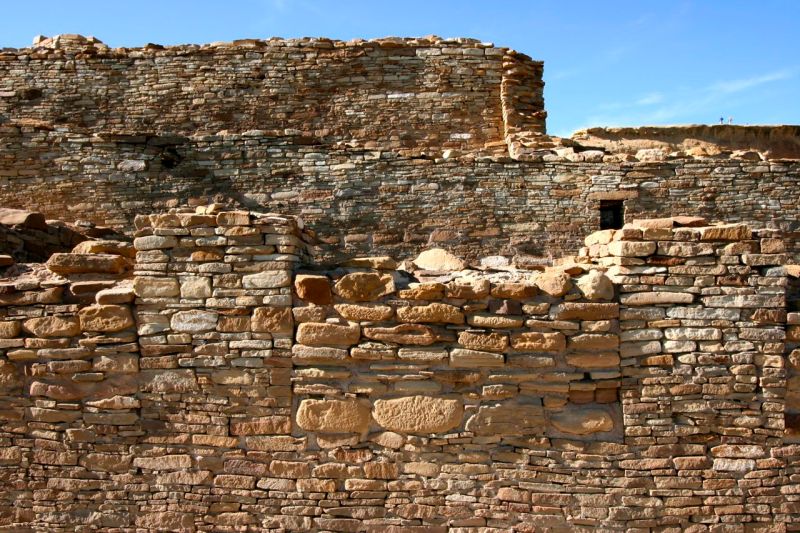 Pueblo Bonito, the most famous of the complexes, is estimated to have had around 600 rooms and 40 kivas, but archaeologists think that only a very few people lived there relative to its size, implying a residence for elites. Of course, this is all speculation because there was no written record left behind. There are other structures throughout the Chaco valley that seemed to have been inhabited by many more people. There is also evidence that Chaco engaged in trade with peoples to the south and in Mesoamerica. All this illustrates how much we don’t know about ancient America, the likely rich heritage and far-flung civilizations that left behind no records, all gone by the time Columbus arrived in the Americas. The Hopi, Zuni, Navajo and other tribes all claim ancestry to the Chacoans.

One of over a hundred rooms in Pueblo Bonito

Damage to Chaco’s architecture, as throughout the Southwest, is extensive. Nature will takes its course since sandstone and mortar are not resistant to water and wind damage. We saw quite a few leaning structures or walls that tilted one way or the other. Behind Pueblo Bonito, a large sandstone block collapsed within the last 70 years that destroyed a back portion of the complex. It was called Threatening Wall for the longest time, and it lived up to its name. Humans, including early archaeologists, have also contributed to damage by removing or otherwise damaging some of the material, not to mention plundering ancient artifacts. One great 400-foot D-shaped wall behind Pueblo Bonito is supported by buttresses and modern cements used in places to prevent erosion, but there is internal debate within the Park Service as to how much it should intervene when modern-day Puebloans and Navajos urge that the structures be allowed to disintegrate on their own and “returned to the earth.” 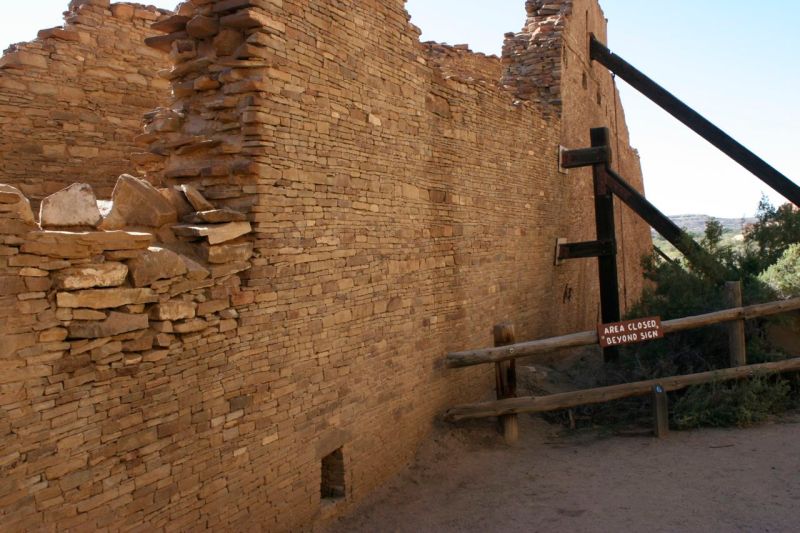 To see the Great Kiva at the Chetro Ketl complex is to see the largest kiva ever constructed in the Southwest. It must have held hundreds of people during ceremonies, impressive in both scale and effort to create it. As a community, it was second in size to Pueblo Bonito, consisting of over 500 rooms.

To our complete surprise, we had the good fortune of serendipitously having timed our arrival with the autumnal equinox. The campground filled up fast with people who arrived for this very purpose. We got up early to observe this astronomical phenomenon. At dusk on the mornings of September 23 and 24, at Casa Riconada (another complex) as you gaze eastward through two portals that are aligned east-west, the sun rises precisely through the center of the portals. Also, the leading edge of a bluff on the horizon marks exactly where the sun will rise. Furthermore, looking westward over the easternmost wall, its portal shadow will frame the western portal dead center. No one can say for sure whether this feature was intentional or not, but it is compelling enough that a volunteer archaeo-astronomer spends quite a bit of time studying and giving lectures about all the astronomical alignments throughout Chaco.

On the autumnal equinox, the sun rises through two portals aligned precisely east-west

We were originally going to spend two nights camping at Chaco but decided to move on after a single night of freezing temperatures and soul-deadening freeze-dried food. We’re wimping out in our old age. One phenomenon we got to experience was the heavenly vault of the Milky Way in all its glory, a sight we modern humans rarely get to see. There were no clouds or light pollution to obscure all the stars in the sky as well as the belt of clouds that comprise billions of stars at the outer edge of our galaxy. It was really humbling. 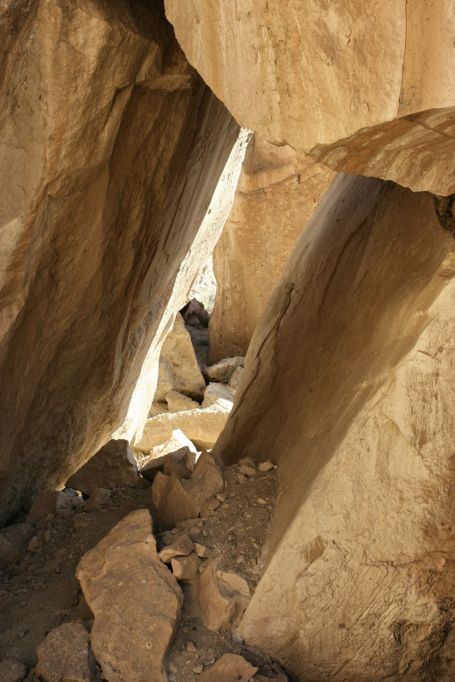 Fallen rubble from Threatening Rock that collapsed in 1941 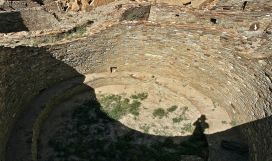 Kiva with my shadow

One of the five masonry styles at Chaco

Another immense rock will likely fall in the near future

Ruins near our campsite 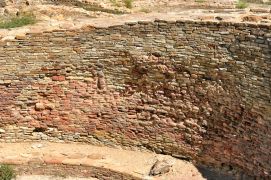 The reddish stones contrast with their muted neighbors