On the afternoon of our arrival, along the Bryce Canyon scenic drive, the temperature was in the 40s and a stiff wind was stinging our faces and blowing dust and sand into our eyes. Snow was clearly visible on the higher slopes. Sound like vacation in the winter? Only a few hours earlier we were basking in sunshine along the Cottonwood Road in Grand Staircase-Escalante, not more than 30 miles away. What gives?

Bryce Canyon National Park sits almost at the top of the Grand Staircase, part of the Paunsaugunt Plateau, which towers over 8,000 feet above sea level. Consequently, it is much younger (geologically speaking) than the escarpments below it far to the south and east. Only Aquarius Plateau sits higher (another 2,000 ft!). At these high elevations, Bryce stays colder here than almost anywhere in the Southwest. As for the wind, it’s not unusual for canyon country to experience howling winds.

In spite of colder temperatures and high elevations, Bryce Canyon draws a considerable number of tourists. Its main attractions are the limestone pinnacles (known as hoodoos) that are everywhere in the park. They are carved by eons of water erosion. Pinnacles have their start as narrow fins that erode over long periods of time. The Paiutes believe that the hoodoos are the Legend People, a human-animal hybrid who were eternally frozen in stone. 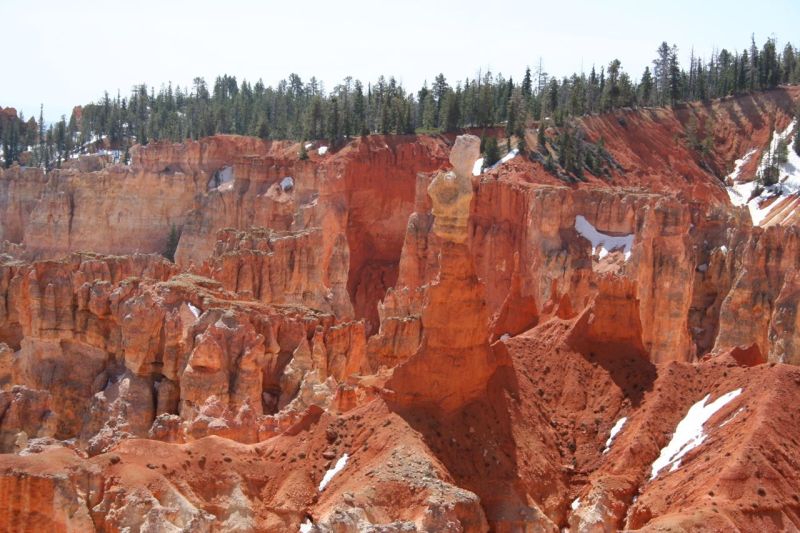 The scenic drive is what most visitors confine themselves to when experiencing the park. Armies of buses and cars ply the paved road that stretches some 18 miles from the visitor center to Yovimpa Point at the southern end. During peak summer months, shuttles provide a more convenient and less stressful way of getting about. The overlooks reveal the majestic hoodoo formations from above, like a million minarets packed into the hillsides. On a sunny day, they glow brilliantly and never fail to enchant the beholder. But, they are at their spectacular best at sunrise and sunset when the colors assume richer tones and the shadows provide mysterious contrast. Each overlook has its unique display, but if you want to get a good look at much of the vast Grand Staircase on a clear day, go to Yovimpa Point at the southern end of the drive from where it is possible to see all the way down to the treeline on the Kaibab Plateau (the north rim of the Grand Canyon).

Wall Street positively glows at noon on a sunny day

To experience Bryce intimately, you’ll need to do some hiking below the canyon rim. The hordes of people at the overlooks virtually disappear when you take even the shortest hikes. If you want to limit yourself to one relatively easy hike with a huge payoff, definitely do part of the Navajo Loop, which starts at the Sunset Point overlook, by walking down to Wall Street at around noon. The hike drops in elevation fairly quickly, a series of switchbacks that descend over 500 feet. Shortly, you’ll be rewarded with a stunning walk through a narrow canyon between towering fins that glow a luminous orange when the sun is directly overhead. On reaching the towering Douglas firs at the other end, said to be over 750 years old, you can turn around and go back the way you came. To do a bit more exploring, complete the Navajo Loop trail and continue on to Thor’s Hammer by taking the rest of the trail past the firs. We chose instead to combine the Navajo Loop with the Queen’s Garden Trail. This combination is a longer hike and affords excellent close-up views of the hoodoos. The hike includes two tunnels carved through fins. On the return to the rim, the hike ends up at Sunrise Point, from where you can walk only a level half mile back to Sunset. 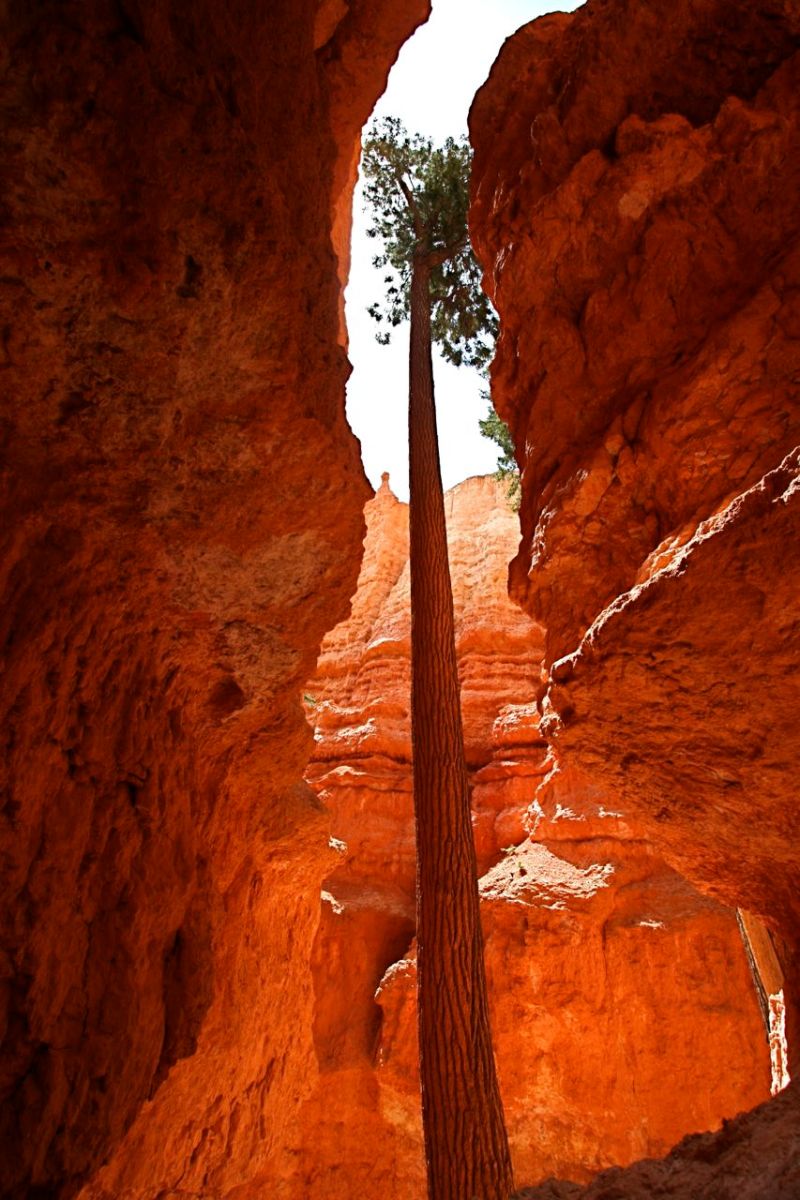 We lodged in the town of Tropic, seven miles from the park, a more affordable alternative to Ruby’s Inn. There’s not much to do here and the food is mediocre.

Ruby’s Inn bears special mention. With the closest town miles away from the park, this resort complex has everything: accommodations (Best Western), restaurant, campground, post office, general store, car wash, gas station, and even budget lodging (Bryce View Lodge). It is conveniently located just north of the park boundary. Many guided tours start here. It is an amazing, if over-the-top, complex, though you pay for the convenience. The only other, more convenient place to stay is the park lodge itself. 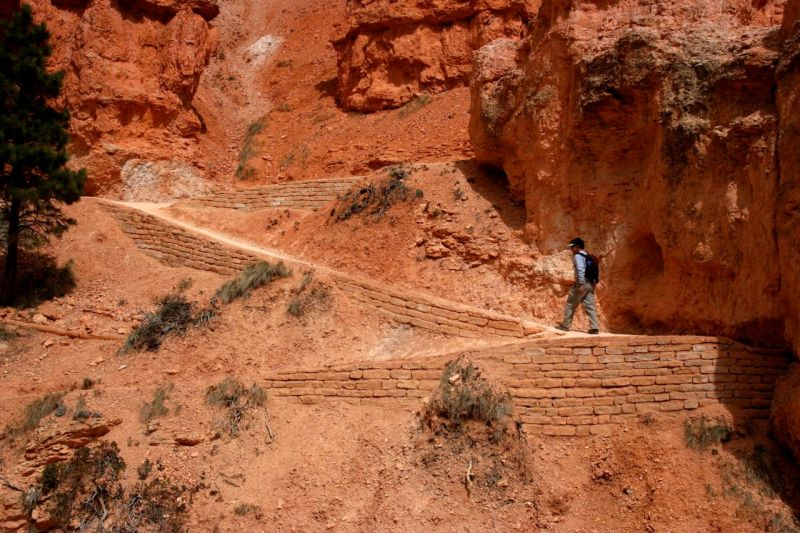 Part of the Queen’s Garden Trail

Geology notes: Bryce’s hoodoos are composed of Claron formation limestone and softer sandstone layers beneath. The warm colors come from the iron oxide in the stone. Because of the high elevation, the weather is very cold here for most of the year. The freezing and thawing cycle contributes greatly to rock fracturing. This “mechanical weathering” combined with water erosion shape Bryce’s landscape. If it weren’t for the harder dolomite (Claron) limestone that caps the softer layers underneath, the hoodoos would be reduced to sandy rubble and Bryce would not be the attraction it is today.