Driving down Highway 24 from Torrey, a wall of rock emerges on the horizon as far as the eye can see. It is an impressive sight, the western edge of the Waterpocket Fold, exposed when the Colorado Plateau was formed. Beyond this is a colossal warp (geologists call this a monocline) in the landscape. From Torrey in the west to Hanksville in the east is a downward bend of roughly 2,500 feet. Capitol Reef National Park was established to showcase the Waterpocket Fold, which extends north-south for about a hundred miles.

The inner canyons can be enjoyed on some of the short drives and hiking trails. We took the Grand Wash Trail, an unimproved dirt road open to vehicles. Along its two-mile length that penetrates the interior of the Waterpocket Fold are spectacular views of the canyon. Eventually, the walls on either side close in and you will be mesmerized by possibly the only slot canyon in the Southwest that can be experienced by car.

Another hike at the end of the scenic drive is the one through Capitol Gorge. This trail features petroglyphs carved by the ancient Fremont people and by Mormon settlers and traverses through monumental canyon walls that eventually become narrower. The colossal Navajo sandstone domes for which the park is famous also make their appearance. A short spur trail took us to The Tanks, cisterns or waterpockets (for which the Waterpocket Fold is named) that fill up following rainstorms. 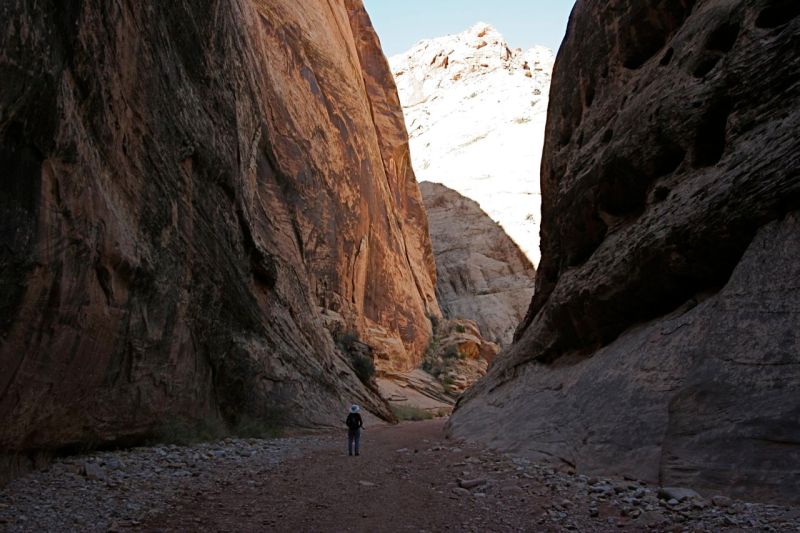 A beautiful natural arch, curiously called Hickman Bridge, can be reached on an easy 1.2-mile trail that passes splendid examples of Navajo sandstone domes. It rises 125 feet and spans 133 feet. 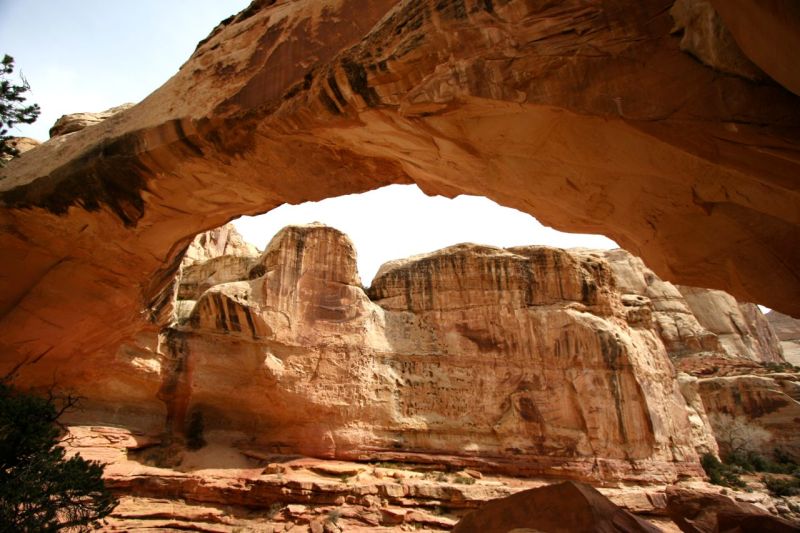 With the increasing value of the euro, Europeans have been finding that travel in America is very affordable. We were surprised at the numbers of European travelers here and elsewhere during our vacation. In the dining room of the motel where we stayed near Capitol Reef, we were practically the only English-speaking patrons. The biggest surprise was the fact that the Germans appeared to be the only drivers of rental motorhomes. And, equally odd, the French were a fair number of Harley bikers. Travelers we met throughout our vacation were also from England, the Netherlands, Belgium, Italy, Russia and other Slavic countries. Some languages we couldn’t identify. Amazing.

Geology notes: One of the visual wonders of the park is the exposure of millions of years of sedimentary rock, sandstone and shale laid down and cemented during the Mesozoic era, thousands of feet thick. The dominating sandstone is the Navajo, which appears tannish white and is the foundation for the many smoothed domes throughout the park (hence, the park’s name). Its layer is about a thousand feet thick. The towering, massive, sharply defined cliffs facing the visitor center and most of the paved road inside the park is Wingate sandstone.

Geologically, the Waterpocket Fold is classified as a monocline, a rock layer that has been bent or folded by lateral compressive forces resulting in one side dipping, almost buckling down to the other, like a fold in the earth’s crust. I wondered if the immense compression was also involved in the Colorado Plateau uplift. Most of the domes are along the monocline. The interesting thing about the Colorado Plateau area is that monoclines are as common as faulting.