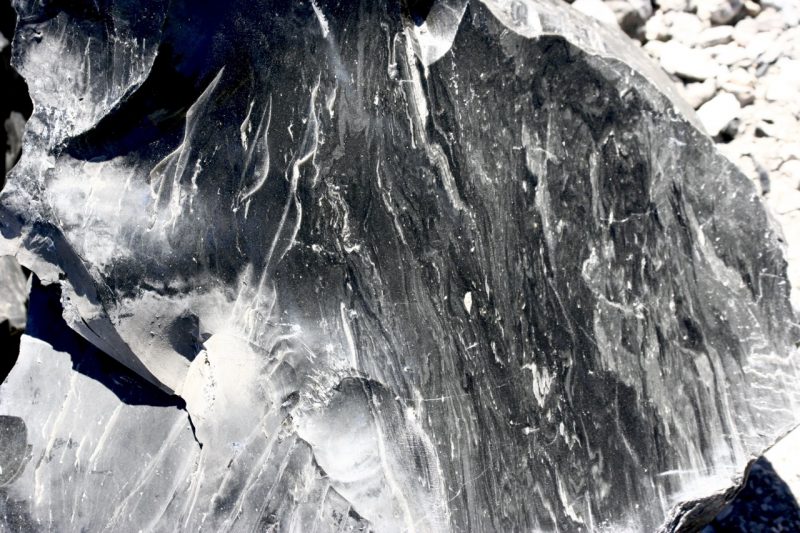 The lava sparkles. In a sea of black, rocks reflect light like mirrors. It’s eerie enough to walk through a lava field where the ground beneath seems scorched by a cataclysmic firestorm, inhospitable to life, meager vegetation struggling to stay alive.

Here in Newberry National Volcanic Monument in Oregon there also happens to be an enormous obsidian flow, one of the very few in the world that can be explored on foot. Obsidian shines because it is glass created by Mother Nature.

Welcome to eastern Oregon, a stark contrast to the greenness west of the Cascade Mountains. The landscape is strewn with volcanoes and volcanic fields thanks to the relentless creep of plate tectonics. When hot lava consists almost entirely of silicon dioxide (SiO2), cools fast enough and free of gas bubbles, obsidian is created. I never thought of pumice in this way, but it is likewise a volcanic glass, also high in SiO2, where explosive events trap gas bubbles before cooling. It isn’t shiny as a consequence. Ancient peoples treasured obsidian for making tools and weapons, particularly arrowheads.

Because of glass shards, there’s a sign on the trail that warns of taking Fido for a nature walk or your traipsing through with flip flops or sandals. The hazard reminds me of a time when I saw three or four young ladies from Japan trying to negotiate the steep, rocky trail to the top of Diamond Head crater—in high heels. I don’t believe they made it very far.

The flow area is about one square mile (2.6 km2). The easy loop trail is 0.6 mile (1 km). At the far end, there’s a good view of the Newberry Caldera, the large shield volcano that dominates the park after which it’s named.

The higher I went, the more black glass I saw, some in spectacular piles, some still in layers. 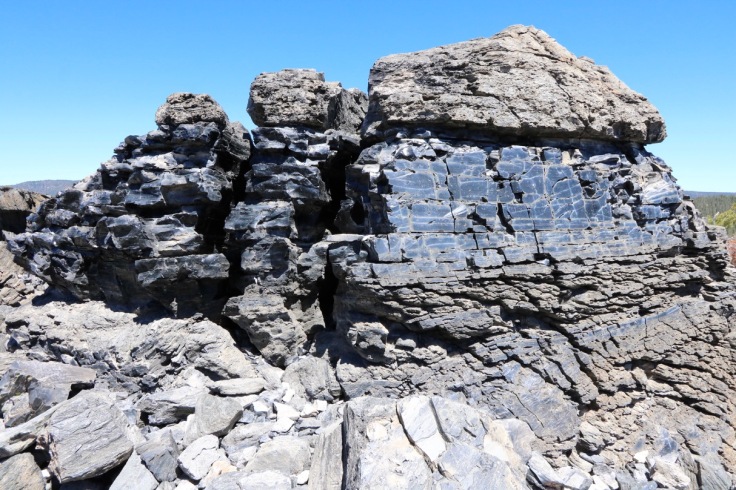 The most astonishing fact was that the Big Obsidian Flow, which is what this attraction is called, was created only 1,300 years ago. That must’ve scared the living bejesus out of the local peoples who likely fled. Locals today would flock toward it, smart phones in hand.

Halfway into the monument is an attraction called Lava Cast Forest. Imagine old growth trees suddenly inundated by lava flows. Instant incineration, you’d think. Not quite. Turns out that the steam from larger flaming trees caused slow-moving lava around them to cool down and harden. After the trees eventually rotted or burned away, molds were left behind. Vertically oriented hollows look like small man-made wells.

The longest horizontal mold is about 50 ft long. I might’ve found it if I walked far enough on the trail.

The ‘forest’ is at the end of a 9-mile gravel road that takes a bit of patience to drive and that’s guaranteed to cake your car in mucho dust.

Another curious sight in the lava fields are pines, some very ancient, whose trunks appear twisted, the biggest ones in tight coils. It’s a remarkable adaptation to a hostile, arid environment, the most efficient way to channel water to the whole tree from a single tap root that extracted scant moisture from the ground while the other roots expended energy just to keep anchor.

At the edge of Newberry Caldera is Paulina Falls. It’s a little odd to see it in an area as desolate as eastern Oregon, but here it was, not one but two. They spill over from Paulina Lake which replenishes not from rain but hot springs and snowmelt.

The falls are a short hike from the parking lot.

Oregon seems to have more than its share of volcanoes, all part of the Cascade range, which also includes Mount St. Helens. Mount Hood stands majestically over the horizon in Portland as much as Mount Rainier does in Seattle. On a clear day, you can see several at once if you’re high enough, as we did when we hiked to the top of Smith Rock.

More numerous yet are cinder cones, which look like miniature volcanoes, but are really a conical pile of cinders, like the ones used for landscaping, that were spewed from and settled around a vent. I noticed many as I drove along US 97, a major north-south thoroughfare east of the Cascades.

One of the largest is showcased in the monument. Lava Butte stands at 5,970 ft (1,820 m). My wife and I took a shuttle to the top from where we saw the crater and walked an interpretive trail.

I was amazed by the size of the lava field surrounding the base.

After all this outdoor activity, especially in warmer months, your stomach can work up an appetite and throat get pretty dry. Over the years, I’ve eaten at many places in and around Bend but only a few stood out.

I’ve yet to find any place better for a great dinner than Diego’s Spirited Kitchen, located in Redmond about 15 miles north of Bend, a Mexican restaurant with a menu more interesting than a typical one. Despite that and I’ve had this three times already, Diego’s flat iron steak is hard to beat, topped with an incredible sauce reduction and blue cheese butter. It doesn’t sound very Mexican yet it’s one of their specialties. Forget the side of fries and opt for green rice.

The margaritas are potent, none made from a mix and all customizable from a long list of premium tequilas. Gratis tortilla chips are wonderfully light and crispy served with a very good, zippy salsa.

Voted by Yelpers as one of the top 100 places to eat in 2017 and 2018, Bangers & Brews serves an excellent hot dog with suds to gulp it down with. The sausage, one of a dozen to choose from, is grilled nicely with casings that make each bite snap. The way it works is you order sausage, two toppings and one sauce. There’s enough variety to satisfy everyone. One of their signature sides is Bacon Gorgonzola Fries that is a meal in itself, savory and rich, but even its small portion is more than two people should sensibly eat. Craft beers from several local breweries are available.

Bakeries are always nice places to get freshly made bread and pastries but few have outstanding meals to start the day. The savory morning sandwiches at Sparrow Bakery are the stuff of legend. Its croque monsieur combines slices of brioche, ham and bechamel all topped with Gruyere.

The most popular seller is bacon breakfast sandwich, a messy but delicious creation of poached egg, bacon and arugula aioli in a toasted croissant.

Bend is a popular winter sports destination but it should be part of the summer’s exploration of outstanding geological sites.