When we planned our Morocco trip, my wife wanted very much to have the experience of riding camels in the Sahara. I liked the idea a lot, too. After all, how often does one get to ride the ships of the desert in their native habitat? On top of that, we chose to stay overnight in a tent. For us, it would be a chance of a lifetime.

Was it everything we had imagined it would be? Definitely, yes. We never thought we’d set foot on the Sahara, for one thing. And I learned a little something about the Berbers, the nomadic peoples that have made the desert (and all southern Morocco) their home.

There were a few things about camel trekking that I didn’t foresee. Intellectually I might have. Riding a camel is not easy. It’s like learning to ride a horse for the first time.

Camels need to be kneeling on all fours before you can mount.

They first lift their hind legs, which means you pitch forward. If it weren’t for the handlebars on the tourist-modified saddle, I’d be on the ground face down. Really, anyone can hang on. Then, when they straighten their front legs, you pitch backward. The whole thing caught me off guard.

The saddle is wide, contoured to fit over the camel’s hump. There are no stirrups. My legs dangled to the side the whole hour or so it took to get to camp. I could feel the stretching of my inner thigh muscles. When I got uncomfortable, I tried to place my legs forward but that got tiring. My thighs ached well after dismounting, even into the following day. My wife had no such problem. Her years of yoga served her well. I felt like a wimp. Getting off the camel was a lot easier: lift one leg over the handlebars and slide off.

Once the caravan got going, I figured I could just relax (except those aching thighs) and enjoy the magnificent scenery. But going down a slope (which happened several times) proved challenging, too. I had to push back on the handlebars to keep myself upright. So did everyone else.

I had the luck to be assigned to a rambunctious camel. Maybe he didn’t like my Indiana Jones style hat or the camera holster I was wearing or the permethrin-treated pants. Or maybe it was just me. He complained and stood up before I could get on him the first time. Mohammed, our camel guide, had to wrap a rope restraint around one folded leg before attempt #2. I made it this time. My camel stood up and snorted. For the ladies, Mohammed offered the top of his stooped leg like a mounting block. The other male rider had longer legs. The third time I got on the camel, he probably didn’t like how I ungracefully plonked myself down on his back.

Don’t get me wrong, I enjoyed myself immensely. When I was mindful of where I was and the opportunity I was fulfilling, the experience became more than the discomfort and awkwardness of camel riding, which I would soon forget anyway. I began to look out at the majestic reddish-gold dunes, watch dessert beetles leaving their interesting tracks, wonder how plants can exist in this arid environment, realize I was in Africa for the first time. I was in the Sahara, the biggest hot desert in the world, and I was one of the few lucky non-Berber people who could claim that. 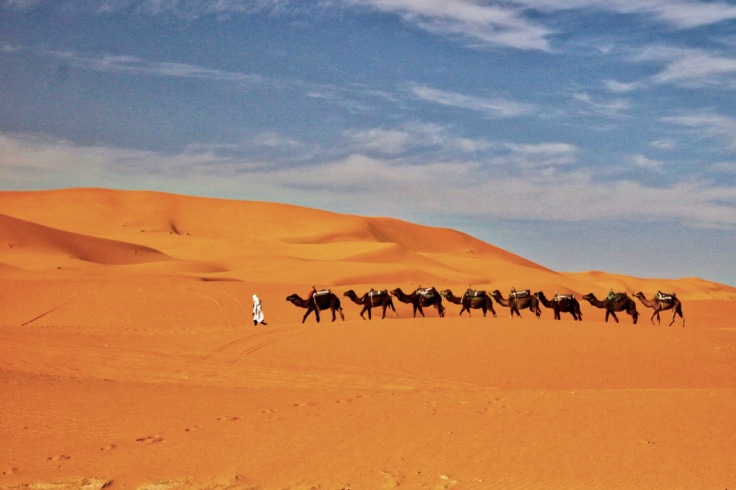