From a distance, it could be mistaken for snow, a vast, flat valley of blinding whiteness. Except the temperature is 100o F (38o C). And it’s Death Valley. The field is instead a salt flat so big that from the middle of Badwater Basin, it seems to stretch to infinity, if it weren’t for the abrupt Panamint Mountains jutting up that even so are miles away to the west.

At Badwater Basin, my wife and I walked a mile onto the flat, wanting to stand at the lowest point in the continental U.S. (at 282 feet below sea level), as did many other visitors, but there was no obvious signpost or marker. The ground looks to be a mixture of mud, sand and nearly pure table salt (sodium chloride). With no defined path, everyone spread out like an alluvial fan onto the expanse. Hundreds of us were scattered to the four winds. My wife and I never did find the official ‘spot’ (identified by a pile of rocks, according to a ranger I spoke to later at the visitor center), so instead we marveled at the vastness of the surroundings. We gazed at snow-capped Telescope Peak which towers in the distance at over 11,000ft, the highest point in the national park.

Badwater Basin is an endorheic basin, meaning that the waters that do collect here from periodic rains don’t drain to any sea or ocean. Like many land-locked basins in the desert, it just dries up. And whatever salt was trapped here from ancient seas or minerals drained from surrounding mountains just concentrate from evaporation. The drainage system of Death Valley is incredulously the size of New Hampshire.

Close to the ‘trailhead,’ there were salt crusts with raised ridges hexagonal in shape, proving once again that nature, despite apparent randomness, has a tendency toward organization, toward pattern.

The Death Valley floor tilts slightly. While Badwater is at the lowest part, just to the north is another marvel, an enormous field of ‘rocks’ made of crystallized salt. At Devil’s Golf Course, several feet above Badwater and relatively dry, the salt through capillary action and weathering forms complex shapes of jagged, rock-like hardness that would seriously injure anyone unfortunate enough to slip and fall on them. It’s takes a lot of caution and mindfulness to walk on them.

The question naturally comes up if anything can live in this hyper-salinity. I visited Salt Creek in hopes of seeing pupfish that can exist in water four times saltier than the ocean and searing temperatures. I wasn’t disappointed. From the boardwalk, they darted in the water so fast that it was nearly impossible to take pictures. Finally, there were spots where they seemed less ‘frantic.’ 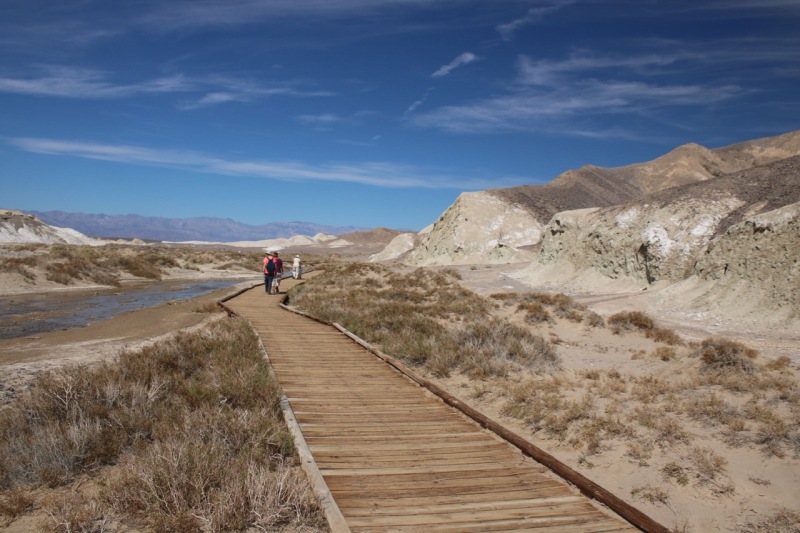 Pickleweed and salt grass tolerate a surprising amount of salt, each having evolved in unique ways to adapt. Arrowweed tolerates some salt and grow most prolifically in an area called Devil’s Cornfield near Stovepipe Wells. The name apparently comes from the plants’ appearance as sheaves of corn bundled together as in the olden days.

One of the best ways to appreciate the salt valley’s size is from a high vantage point. Dante’s View atop the Black Mountains is likely the most spectacular. I was able to see a good portion of the valley from the parking lot, but a foot path toward the south revealed even more.

Death Valley isn’t the only salt valley in the national park. As if to emphasize the park’s huge size, it took a good 11⁄2 hours to exit the park from Furnace Creek through Panamint Springs. The road goes over the Panamint Range and across the Panamint Valley, which is yet another vast salt flat. I could see the salt pan on either side of Highway 190 that cuts across it.