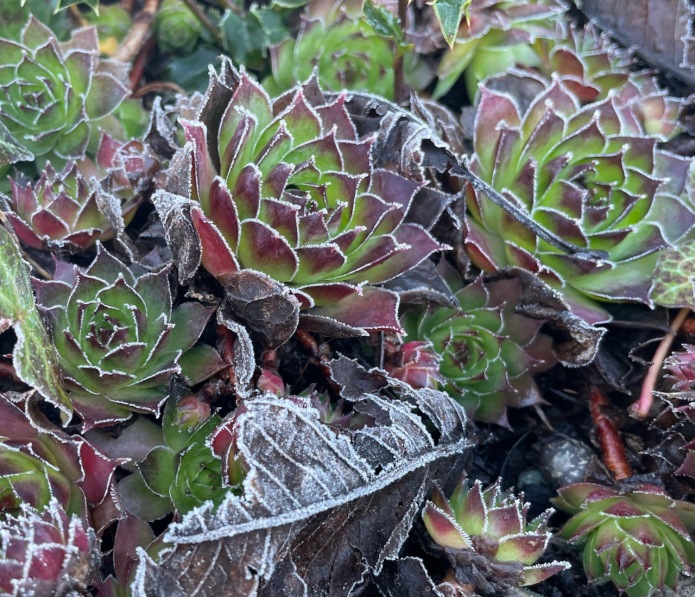 Seattle saw a brief blizzard on Monday night that was on the edge of freezing over and piling up. But by morning, it stopped snowing and the thaw began. This is an excellent time to take pictures of interesting ice shapes and frost outlining many plants’ interesting contours. 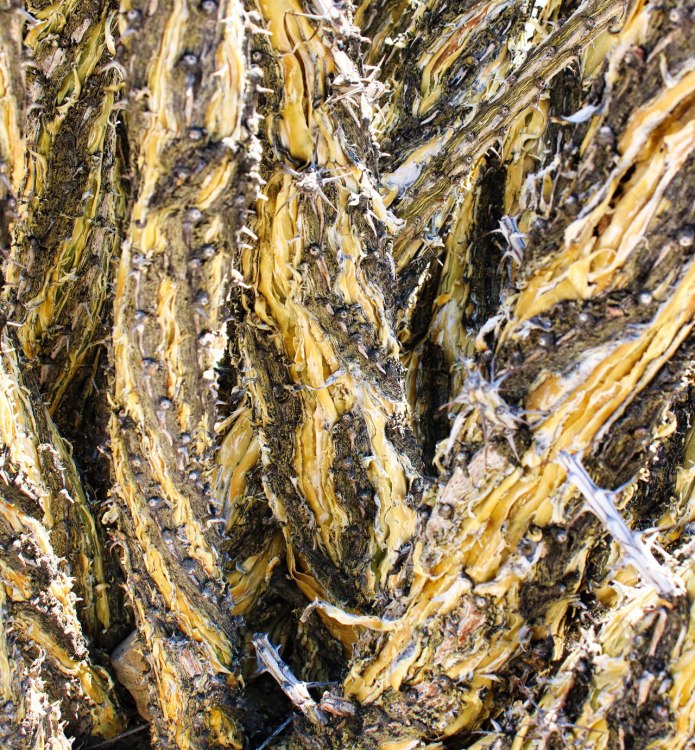 The American Southwest has its share of hardy plants that evolved to survive punishingly dry and hot conditions. The ocotillo is as spiny as any cactus, although it isn’t one itself. They sort of look like tall dead sticks splaying out from the ground, but they produce beautiful red blossoms after a rain. Look closely at the base and you’ll see a tangle of spiky stems that dare you to stick your hand inside. The photo above was taken at Joshua Tree National Park. 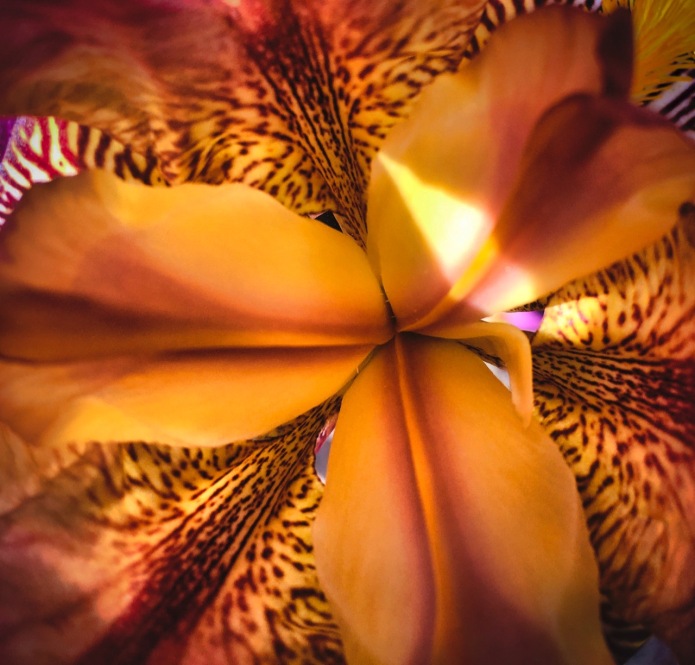 This is the time of year in the Pacific Northwest when irises bloom. There is a nice assortment of bearded irises in my daughter’s neighborhood in Seattle. While they’re gorgeous to look at, I never bothered to look inside the flower. This takes a little effort because the upright petals (called standards) need to be peeled back to reveal the interior. Photography is even more of a challenge because of the ‘obstruction’ and the casting of a shadow when the camera gets close. But, when I took these pictures, it was bright and sunny outside, and I had my camera phone handy. It was worth the trouble. 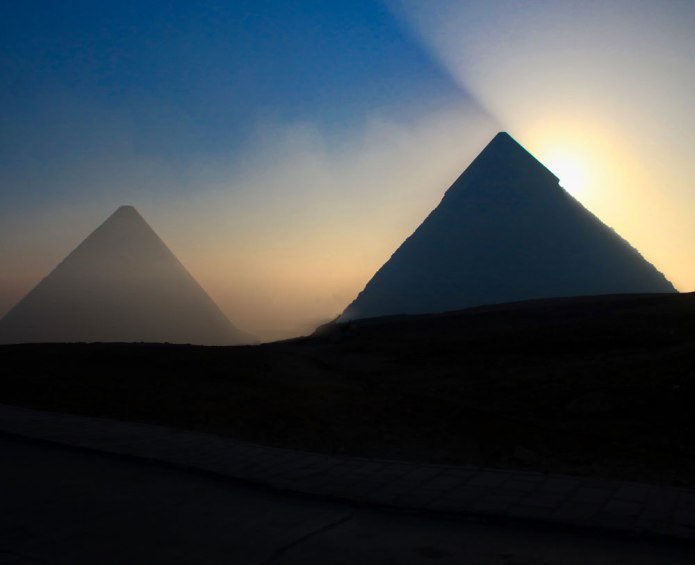 The sun had risen while at the Sphinx. I boarded the tour bus to go to an observation area to see the three pyramids of Giza on the horizon. It stopped briefly beforehand so we could all see Khufu and Khafre’s pyramids close together. In one of those serendipitous conjunctions in time and space, Khafre just shielded the sun along one edge to produce a spectacular glow in the sky. 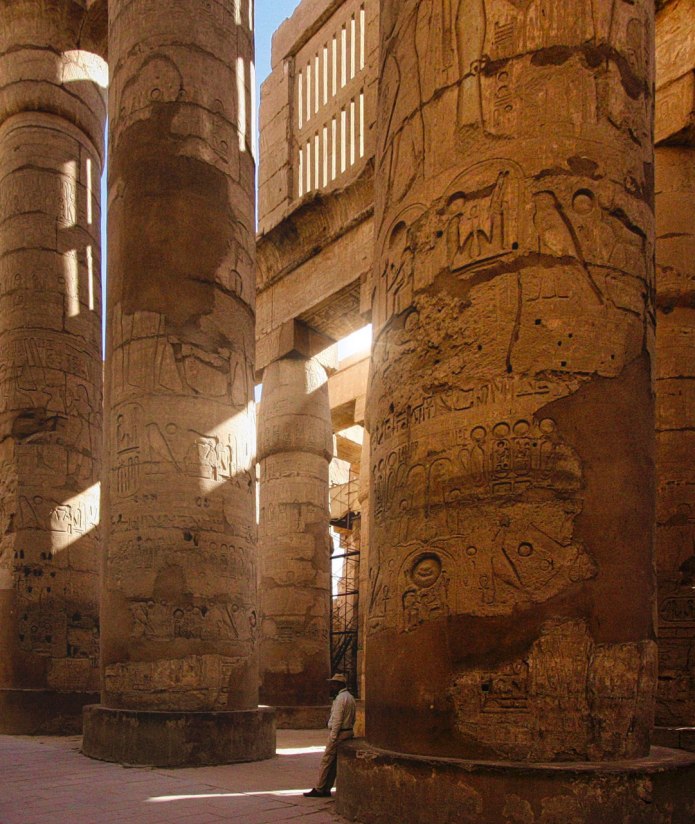 The Temple of Karnak in Luxor rivals an amusement park in size. The grounds are so big that it can easily surround the great cathedrals of Europe: Notre Dame, St. Peter’s, Milan and more. Started in the Middle Kingdom and added to over a period of 2,000 years into Ptolemaic times by thirty pharaohs, it is a complex mishmash of smaller temples, hypostyles, courts, chapel, pylons, storerooms and living quarters. It even contains a lake.

With this kind of cornucopia, it isn’t surprising that it’s the most visited site in Egypt second only to the Giza pyramids. In its day, it would’ve looked splendid, judging by its colossal scale and whispers of color that still remain. Now, the patina of old age hints at an ancient civilization long gone. I could have walked around here for hours.

At 50,000 sq ft/4,600 sq meters, the Hypostyle Hall is the largest religious building in the world. The largest of its 134 columns is 79ft/24m high with diameters of 10ft/3m, dwarfing mere humans who walk among them. It isn’t an experience easily forgotten. If the roof survived, the interior would have surpassed the greatest religious structures in the world. 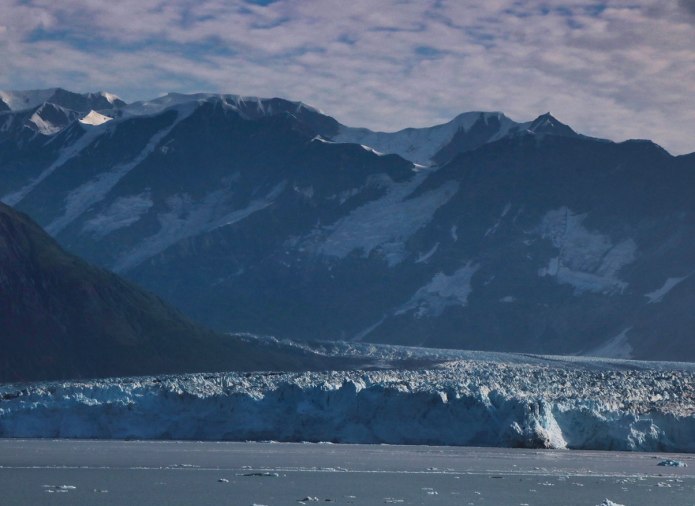 The first I saw Hubbard Glacier was from the upper deck of the cruise ship. The captain announced its approach over the PA system. Passengers positioned themselves wherever they could get a good look. I estimated that the vessel got no closer than a few miles because the glacier, the largest in North America at 6 miles wide at the terminus and 400 feet above sea level, seemed far off. (The images on this page were taken with a moderate telephoto lens.) Even with binoculars, I couldn’t see any activity. Still, even from a distance, Hubbard was impressive, living up to its reputation as one of the most spectacular attractions in Alaska. The cruise company didn’t offer a small boat excursion to get closer. I would love to have seen the calving of icebergs as they groan, crackle and thunderously collapse into Disenchantment Bay.

Hubbard Glacier is an astonishing 76 miles long, the upper part in the Yukon Territory of Canada. Unlike most glaciers, it is still advancing, contrary to worldwide melting of icefields because of global warming. The ship stayed in the bay the entire morning, doing two 360s so all passengers could see Hubbard from anywhere onboard. 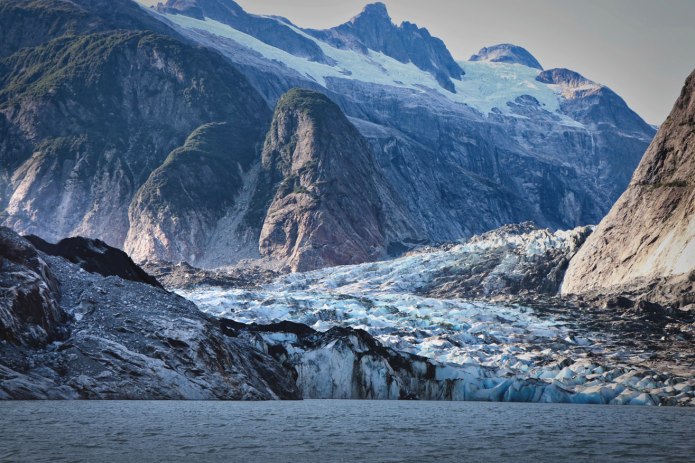 At the end of a jet boat ride on the Stikine River is Shakes Glacier. It has the unfortunate reputation for being one of the fastest receding glaciers in Alaska, at a current rate of 350ft/yr, according to the Shakes Glacier Survey Team. Because of this, icebergs regularly calve from the terminus, some of which I got to see. 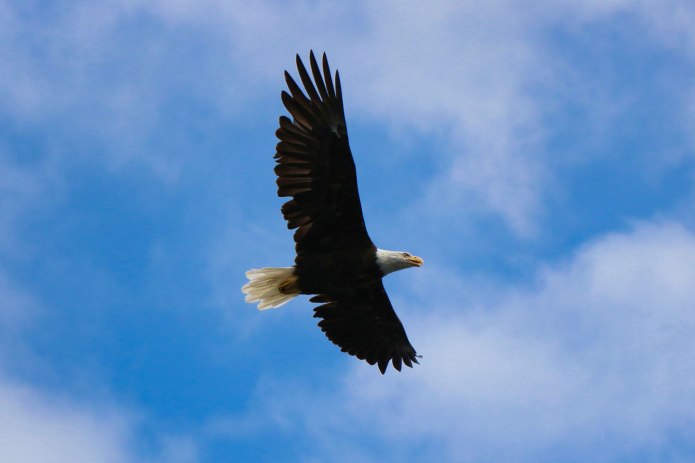 There are terms we use about which we don’t give much thought. On the face of it, their origin seems obvious enough, it’s just that we have no personal experience to give the expressions much tangible significance; they’re part of the common vernacular.

‘Eagle eyes’ is one of them. I was on a boat tour in George Inlet near Ketchikan. To demonstrate the power of bald eagle vision, the guide tossed a herring into the water. We were surrounded by nothing but trees onshore, part of the massive Tongass National Forest that covers most of southeast Alaska (Panhandle, as it’s commonly called). We waited. And waited. The guide thought it might be hunting elsewhere. Then, out of the forest it came, an eagle from easily a mile away. It circled for a bit, then came swooping down and plucked the fish out of the water. It was an incredible demonstration. Now I’ve seen eagle eyes with my own. 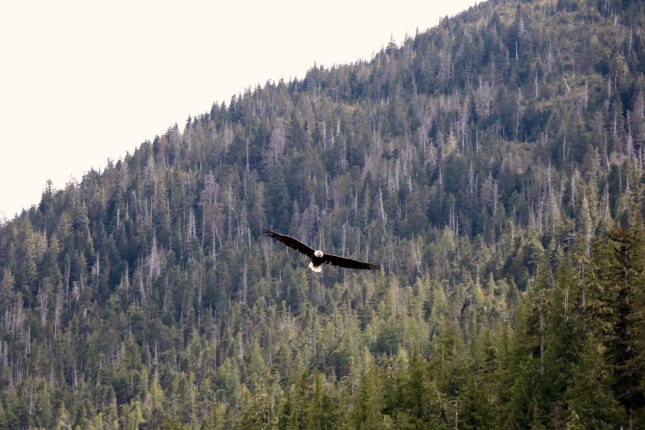 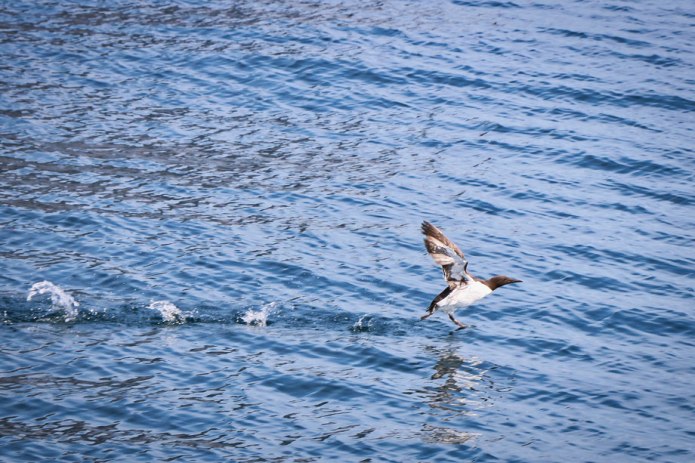 It seems the common murre, also known as a guillemot, needs a good head start to fly. With a relatively hefty body compared to its wings, departure takes a bit of effort and once aloft, it can’t maneuver very well. If you were to suddenly stand up in its flight path, there’s a good chance you and the bird will get knocked unconscious (well, you get my point). But in the water, the murre is in its element and can dive very deep. I captured these images at Kenai Fjords National Park in Alaska. The murre is a very common seabird in the Northern Hemisphere. 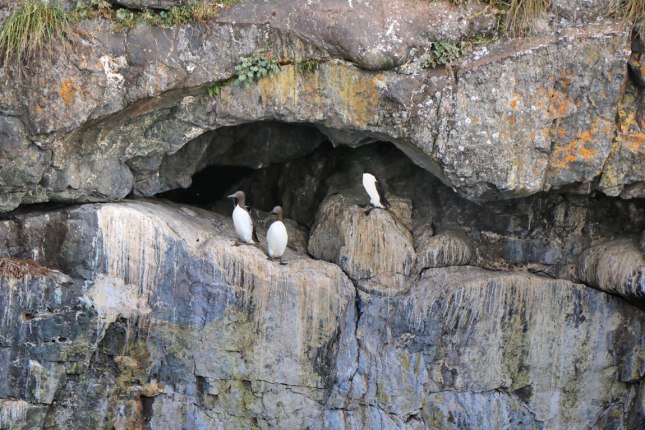 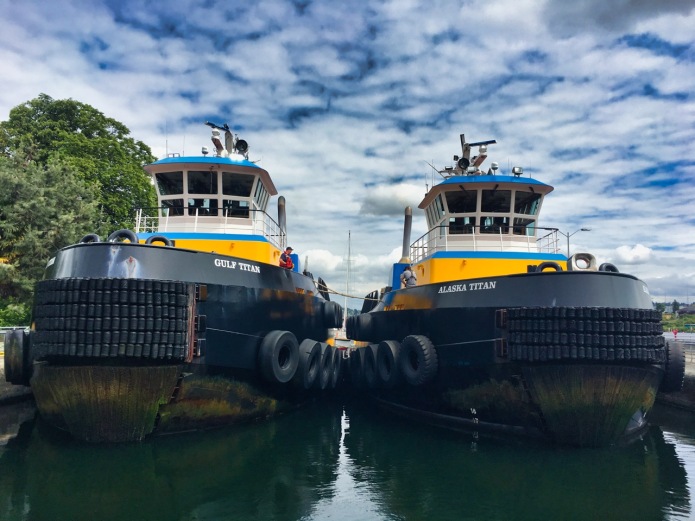 The main reasons to visit Hiram M. Chittenden Locks are the fish ladder to see the spectacular return of salmon and trout to their spawning sites and the passage of seagoing vessels through the locks between Salmon Bay and Shilshole Bay. The Ballard Locks, as it’s more commonly known, is one of Seattle’s top tourist attractions. There are many opportunities for photographers. A fortuitous one was this one where twin tugboats, the Gulf Titan and Alaska Titan, both built by the Western Towboat Company, were astride each other in the large lock.