One of the best—if not the best—reasons for eating in Los Angeles’ sizable Koreatown is the opportunity to taste specialties not on standard Korean menus. For instance, take kalgooksoo (or kalguksu), a noodle soup similar to Japanese udon with its thick wheat-based noodles in a rich broth. Hangari Bajirak Kalgooksoo specializes in it, so highly regarded that a wait to get tables is all too common. Arriving early before the noon crowd is a better way to avoid human traffic at the door. Though my wife and I got there at 11am, within a half hour, all the tables were already occupied.

Instead of banchan, a sort of appetizer is served. A bowl of steamed barley is accompanied by three kinds of kimchi—cabbage, daikon radish and young radish leaves (yeolmu)—as well as a gochujang miso paste (dwaenjang) that can be daubed on the barley with a little sesame oil. 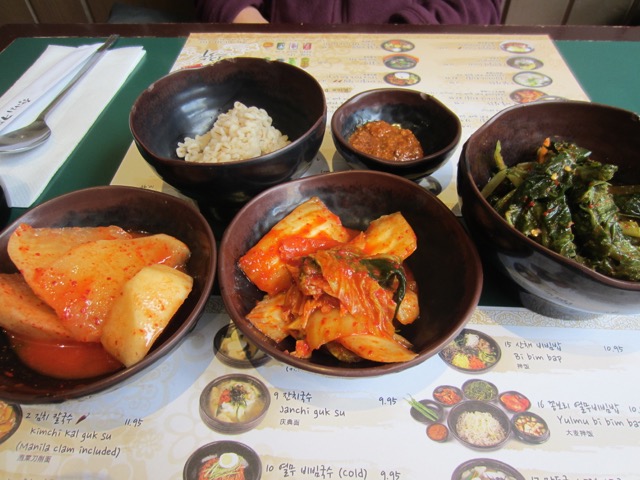 The soups arrived after a wait of 15-20 minutes. The bowls were quite large, holding a generous portion of noodles and broth with other ingredients. Manila clam kal guk su (☆☆☆½) easily harbored two dozen clams (bajirak) which started out perfectly cooked but not surprisingly became more rubbery as they sat in the steaming hot, delicious clam-flavored broth. Also included were slices of high-starch potatoes that were much too mealy and kabocha.

What make these soups a great comfort food, besides the broth, are the noodles. They are typically made from scratch with flour, kneaded and hand-cut with a knife, giving them a superb doughy, springy texture. Hangari delivers in spades.