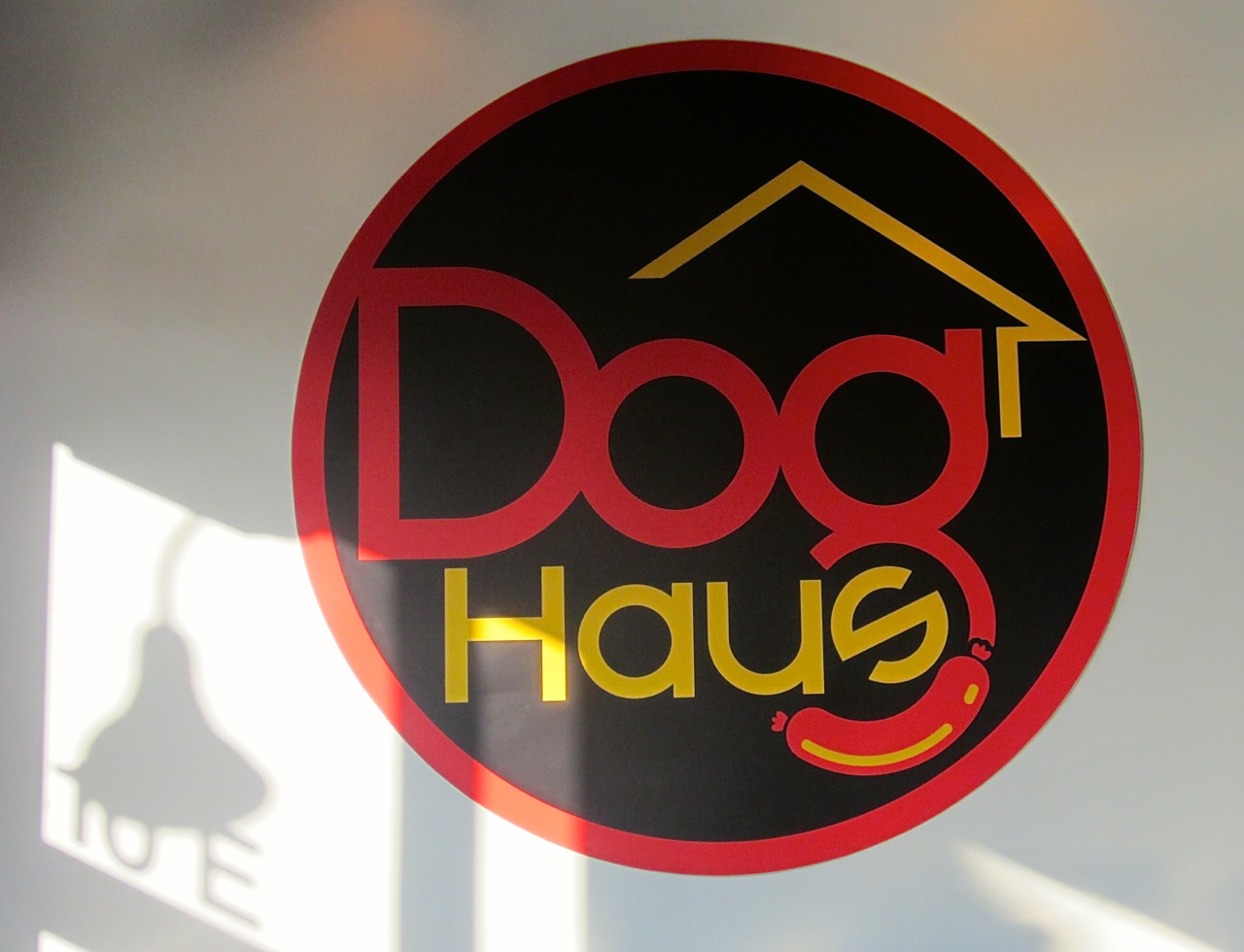 I’ve been grocery shopping at the Alhambra Ralphs countless times when I’ve visited my wife’s family in the San Gabriel Valley. (As a sign of the times, this Ralphs has officially closed and construction has begun on another 99 Ranch Market in the Valley.) Across the street is Dog Haus, which I’d never patronized. Maybe it was because its name and appearance reminded me a lot of Der Wienerschnitzel, a fast-food hot dog chain that’s been in Southern California for ages. But, my wife took our grandkids to Dog Haus last year and declared their food “not bad,” a review I wasn’t expecting based on my preconceptions.

Last night, she and I decided to get a quick bite before Melissa McCarthy’s “Spy” at the Edwards (fun and definitely for McCarthy fans. The fight scene with a female would-be assassin was hilarious for not only what she does with a frying pan but is a parody of all movie swordfights though no swords are used). Dog Haus was close by. 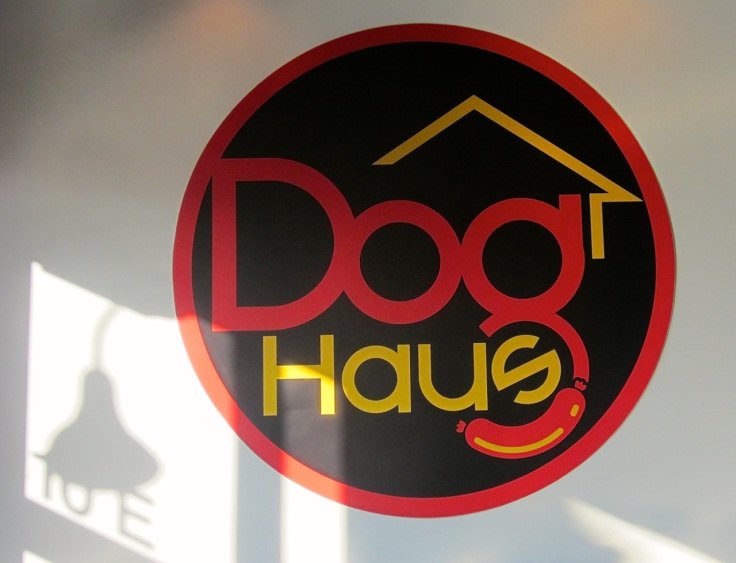 Inside were customers of all demographics: whole families, teen friends, couples, seniors, and (this being SGV) a good ethnic cross section. This is no typical fast-food restaurant interior. The dominant colors are black and red, the dining space brightened by plenty of windows along the south and east walls. Wood planks line the floor. The walk-up counter looks more like a mini food market’s than a McDonald’s, with displays of beverages, desserts, even a row of cereal boxes (to attract the kids?). A sign announces the availability of Fosselman’s ice cream. Though taro, my favorite Fosselman’s flavor, is not offered, two that are sounded tempting: Oaxacan chocolate and horchata.

Free condiments are located at a bar—mustards, a red housemade relish made with peppers, ketchup, sliced jalapeños, minced onions, mayo, crushed red peppers, celery salt, Rooster sriracha, Tapatio and more, any of which can be ladled or squeezed on your sandwich or taken to the table in little plastic tubs.

If you’re not into hot dogs, there is a good selection of burgers, using black angus ground beef. For example, Freiburger comes with white American cheese, haus slaw, and fried egg, with fries.

Personally, I favor uncomplicated dogs. The only condiments that mine will see are relish, mustard and onion. Luckily, you can customize your dog by ordering just the wiener with bun, as I did for Polish kielbasa.

The “bun” is not traditional ballpark but rather grilled and split Hawaiian rolls, giving each dog an added sweet element. Because the rolls are larger than normal buns, it’s best to hold the dog from underneath. The kielbasa casing was thick enough that I had to take a careful, complete bite without tilting or pulling the sausage out of the bun. This was a superior sausage though, flavorful, nicely seasoned, grilled and snappy, not a surprise when the würstmacher is none other than Food Network celebrity Alan Gertler. While I like Hawaiian rolls, they seem more like a gimmick as a substitute for a good old-fashioned bun. And I could do without the noticeable sweetness. Otherwise, this was a very fine hot dog. (☆☆☆)

Besides customizing a dog, you can also do the same with a corn dog. Pick any of the available sausages, all-beef skinless frank or vegetarian option. While cornmeal batter is typically sweet, Dog Haus interestingly sweetens theirs with root beer soda, which does a good job of lightening the batter and hardly has the intrusiveness you’d expect. My wife’s all-beef wiener was speared with two bamboo skewers. Their thin, sharp points became more exposed with every bite, but a firm, slow push of the wiener from the other end removed the danger. A good thing about a thinly applied batter is that you don’t have to plow through much dough before reaching the sausage, but it’s also harder to keep crisped. A very good, high-quality wiener dressed in a corn dog outfit. (☆☆☆)

The sides are beyond ordinary, too. There are the standard fries, onion rings (beer-battered) and slaw (two kinds), but also “haus” chili, sweet potato fries and, to give poutine-loving Canadians pause, either fries or tater tots smothered with cheese sauce, chili, cheddar and seasoned green onions. Sweet potato fries are not as crispy as regular frying potatoes, such as Dog Haus’ Kennebecs, tending more toward mealiness though producing more interesting flavor. We discovered that dipping them in mustard is much preferred over ketchup to counterbalance the natural sweetness. The haus slaw (the other choice is Asian slaw) was exceptional for its balanced dressing and finely shredded cabbage. 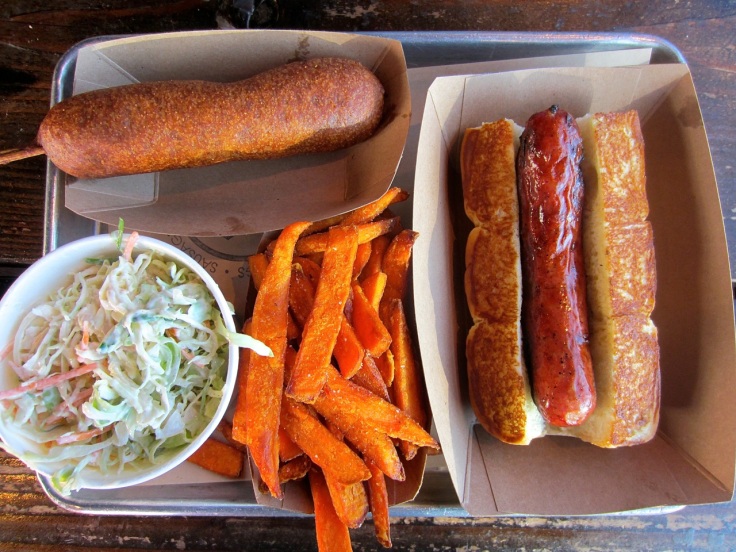 From its humble beginnings in Pasadena, Dog Haus has gone on to open franchises throughout the Southwest. For me, the visit was a pleasant surprise. Did I mention I had preconceptions?