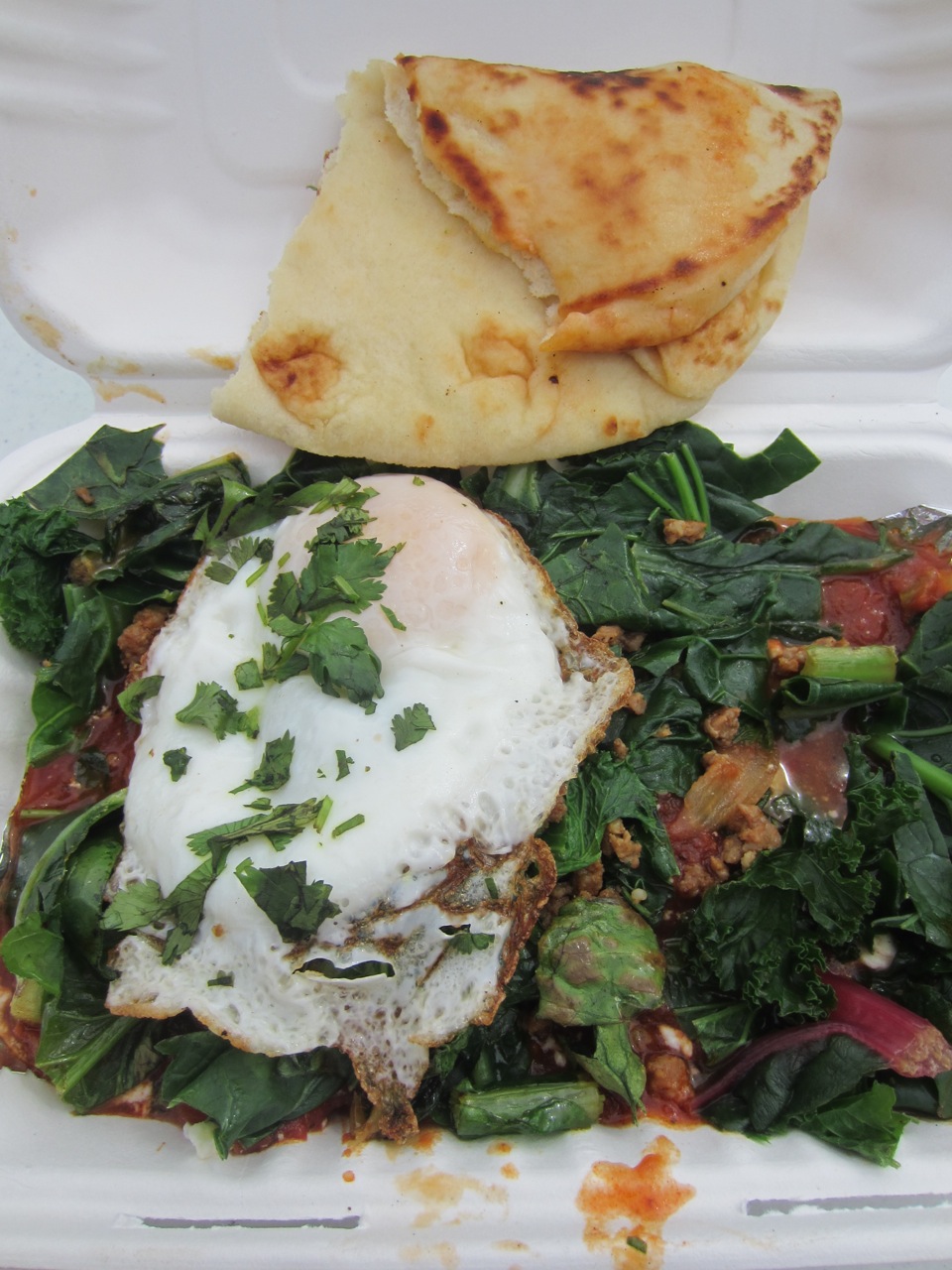 The latest Food Truck Snackdown at the Crossroads Shopping Center happened today, so we were sure to see what was cookin’. Two things were on the radar for this trip.

One was a shiksa, a pork stew that was described in ZAGAT. Sandwich-style, Napkin Friends puts everything between two “slices” of latke, which suggests influences from Jewish cooking. Revealingly, there is matzoh ball soup on the menu. Even the stew’s name is a tongue-in-cheek acknowledgment of its meat ingredient as straying from the non-Jewish arena. Unfortunately, shiksa wasn’t on the menu, so I went to Peasant Food Manifesto instead and got their Inigo Montoya, a spicy tomato-based dish that is labeled a shakshuka. Hey, I recognized that name. Inigo Montoya was that famous character in “Princess Bride.” (“Hello, my name is Inigo Montoya. You killed my father, prepare to die.”) The other items have similarly idiosyncratic names and show PFM’s preference for global fusion food. The shakshuka had lots of tomatoes, which almost qualifies it as a tomato stew, heavy on the chard, and Spanish chorizo from by Uli’s. A fried egg was served on top. The entrée was a hearty dish, spicy and definitely healthier than fried food. (☆☆☆)

Here’s a novelty—British-inspired food served from a food truck, appropriately named Nosh. Looking over the menu, I wasn’t sure anymore what constituted English food. Some day, I might be adventurous enough to spring for fried rabbit or roasted bone marrow, but for now, it was fish and chips, reputedly one of the best served in the Seattle area and another item that was on my list. The Pacific cod piece was enormous, the biggest we’ve eaten since New Zealand. And it was fresh, not having seen the inside of a freezer. To ensure lightness, the batter is mixed with beer, apparently a local microbrew. The result was, according to my wife, the best fish and chips she’s ever had in the States thus far. And I agree. We did differ on the chip quality slightly, but they were equally top-notch, stubby little pieces with skin still attached. Supremely flaky with very little grease on crispy, thinly applied batter, a little tub of tasty tartar sauce, this was magnificent fried fish. A side order of refreshing mint mushy peas was included, not in the least overcooked as it sounds. To add to the British air, the works were served on “newspaper,” which in reality was a clever reproduction on parchment paper. (☆☆☆☆)

Off to the side of the truck pod was a business that was serving malasadas. Hawaii’s Donut only had three kinds, plain, raspberry and Bavarian cream. The server asked if we were Hawaiians (no, we weren’t), but we told him that we love Leonard’s in Honolulu. “Never heard of Leonard’s,” he said, a strange admission coming from a guy whose wife is Hawaiian. A look at Yelp reviews of the brick-and-mortar store in Northgate later revealed many reviewers (several of them Hawaiian and familiar with Leonard’s) who were very disappointed in the donuts. Words like “dry,” “came out of a plastic bag”, “cold” and “instructions for microwaving” were used, uncomplimentary remarks applied to any business making them on the Islands. These were all at odds with the incredible malasadas we had today, hot from frying oil, dusted to order with granulated sugar and carefully put in paper bags. Can it be that the store doesn’t have an in-house fryer while the mobile operation does? These were not comparable to Leonard’s only because they were smaller and lacked in filling variety. They were minuscule, no more than 3″ across. But they were the equal of Leonard’s otherwise, tender, puffy, hot and sweet. Both my wife and I preferred the Bavarian cream, but the malasadas with both fillings had us harking back to Kapahulu. (☆☆☆½)