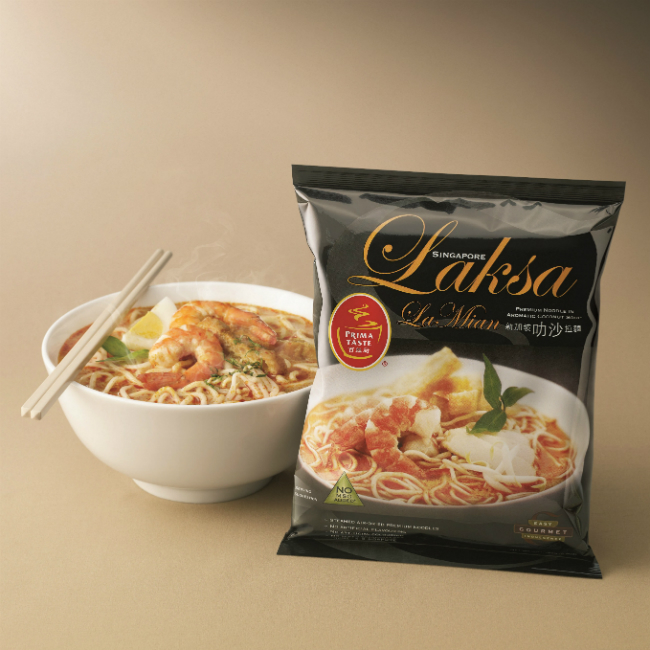 While browsing through T & T Supermarket in Richmond, B.C., some instant noodles caught my eye. What intrigued me was that they were manufactured in Singapore, by a company called Prima Taste. At C$2.99 each on sale, they were a better bargain when converted to US dollars (about $2.33 at the time). I would discover later when I got back home that they’re available from Amazon at $3.87 each for a package of 12 or as much as $6.50 each for a package of two! Pricey. At least, here in the States. Of course, I had no idea at purchase time whether I’d like the noodles or not, so I only bought a single package each of laksa la mian and curry la mian.

In hindsight, I wish I had gotten more. And I wish I’d purchased chili crab la mian as well. Next time I’m in Vancouver.

Here are my tasting notes. Let’s start with the dried noodles themselves. They’re air-dried in a similar manner like Myojo with its line of excellent Chukazanmai packaged dried ramen. No frying in saturated fats. The instructions recommend that the noodles be boiled for 7 minutes, which for most instant noodles would be far too long, turning them into soft, pasty messes. But, incredibly these noodles remained firm and held their chewy resilience from beginning to end, clearly their outstanding virtue.

The different ‘flavors’ come in two packets, one holding the coconut powder that forms the milky basis for the soup, the other the spices, herbs, and whatever else constitute the primary taste. You can adjust the proportions of each according to your own taste.

The broth is quite milky, almost like a New England clam chowder, and briny from a touch of shrimp paste. Combined with the mix from the other packet, they’re also a bit spicy. The laksa la mian can hold its own against good ones served at restaurants, rich and flavorful. The curry la mian has excellent curry flavor. Both have hints of shallots, garlic, ginger, lemongrass and warm spices. These noodle soups will not appeal to as broad a consumer base as instant ramen might. But to me, they’re delicious especially with the addition of shredded rotisserie chicken, fish cakes or surimi, boiled egg, cilantro and plenty of minced green onions. I’ll need to be patient before I can buy any more up north. I haven’t found any locally in the Seattle area. If I get desperate, there’s always Amazon.

Update (7-18-18): Seattle’s Asian supermarket, Uwajimaya, now carries this line of noodles. I first saw them last year. I am now a happy camper that I don’t have to wait until my next visit to Canada.