I don’t usually go to White Center, a Seattle neighborhood, to get a bite to eat. That’s because the drive over there from the Eastside can charitably be described as convoluted. There is no easy freeway access, toward the tail end a series of twists and turns through a light industrial area before finally arriving at White Center. Fortunately, friends of ours were willing to drive. We went to have a late lunch at Greenbridge Cafe, located in what is currently a mixed-income neighborhood (called Greenbridge) of relatively new apartments and townhomes. The cafe oddly sits alone in the neighborhood with no other apparent shops or restaurants nearby.

At 2:30pm, we were the only patrons. I don’t know what the normal lunch and dinner patronage is like, but I get the feeling that the area doesn’t get a whole lot of foot traffic. The four of us ordered from both the brunch and regular menu.

Chorizo hash, from the brunch menu, typifies what the kitchen is aiming for, bistro-style dishes many of which use ingredients of Mexican cooking. Instead of corned or roast beef and bell peppers, chopped chorizo and roasted chiles combined with nicely browned homes fries for a very good south-of-the-border interpretation (☆☆☆½). These weren’t typical Mexican-style ground pork chorizos either, but chunks of roasted beef and pork with a lively chili powder and vinegar flavor. On top was an easy-over fried egg.

The remaining three entrées were ordered from the regular menu. Flatbreads here are shaped like rectangular planks, on the thicker side, more like pizza than, say, a cracker-like, unleavened bread. One is topped with grilled vegetables, another more Mediterranean in execution. The third, most interesting-sounding one, is called chicken poblano (☆☆☆). It was top-heavy but very flavorful with smoked bacon, jack cheese and poblano purée and drizzled with crema. 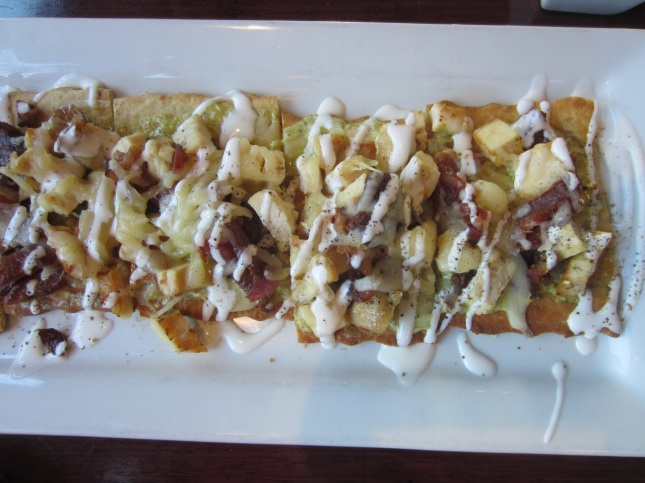 Instead of Cuban bread roll, telera bread holds the Cuban pork sandwich (☆☆☆) together. There was no Swiss cheese in an otherwise standard filling of ham, lightly smoked pork and dill pickles, mixed with a Dijon mustard aioli. The sandwich comes with soup-of-the-day, which happened to be a French onion (☆☆½).

Less successful were the enchiladas suizas (☆☆½), whose overly creamy sauce muted the tomatillo and chile flavors—more Swiss than Mexican. Still, a good sauce. Maybe a little more chicken filling would have helped, too, the enchiladas appearing flattened, seeming more like a happy hour order than a main plate. Furthermore, the chicken pieces were dry. But the whole dish didn’t lack for presentation—a slice of jack cheese jacketed the tortillas, drizzled with crema. A nice lettuce and strawberry salad came on the side.

The chocolate brownie (☆☆☆½) that I brought home was excellent, deeply chocolate-y. While I prefer my brownies to be dense than fudgey, as this was, this double-chocolate cookie was still darn good.

Kudos to chef Blanca Rodriguez for offering such upscale and tasty fare with great attention given to presentation and detail. There’s no lack of quality ingredients here. But, you have to wonder if the place can make a go of it when there are no other enterprises around to create a vibrant commercial core, a thought shared by our concerned friends who brought us here. Greenbridge Cafe, at the moment at least, seems like a place that needs a more supportive environment.

While browsing through T & T Supermarket in Richmond, B.C., some instant noodles caught my eye. What intrigued me was that they were manufactured in Singapore, by a company called Prima Taste. At C$2.99 each on sale, they were a better bargain when converted to US dollars (about $2.33 at the time). I would discover later when I got back home that they’re available from Amazon at $3.87 each for a package of 12 or as much as $6.50 each for a package of two! Pricey. At least, here in the States. Of course, I had no idea at purchase time whether I’d like the noodles or not, so I only bought a single package each of laksa la mian and curry la mian.

In hindsight, I wish I had gotten more. And I wish I’d purchased chili crab la mian as well. Next time I’m in Vancouver.

Here are my tasting notes. Let’s start with the dried noodles themselves. They’re air-dried in a similar manner like Myojo with its line of excellent Chukazanmai packaged dried ramen. No frying in saturated fats. The instructions recommend that the noodles be boiled for 7 minutes, which for most instant noodles would be far too long, turning them into soft, pasty messes. But, incredibly these noodles remained firm and held their chewy resilience from beginning to end, clearly their outstanding virtue.

The different ‘flavors’ come in two packets, one holding the coconut powder that forms the milky basis for the soup, the other the spices, herbs, and whatever else constitute the primary taste. You can adjust the proportions of each according to your own taste.

The broth is quite milky, almost like a New England clam chowder, and briny from a touch of shrimp paste. Combined with the mix from the other packet, they’re also a bit spicy. The laksa la mian can hold its own against good ones served at restaurants, rich and flavorful. The curry la mian has excellent curry flavor. Both have hints of shallots, garlic, ginger, lemongrass and warm spices. These noodle soups will not appeal to as broad a consumer base as instant ramen might. But to me, they’re delicious especially with the addition of shredded rotisserie chicken, fish cakes or surimi, boiled egg, cilantro and plenty of minced green onions. I’ll need to be patient before I can buy any more up north. I haven’t found any locally in the Seattle area. If I get desperate, there’s always Amazon.

Update (7-18-18): Seattle’s Asian supermarket, Uwajimaya, now carries this line of noodles. I first saw them last year. I am now a happy camper that I don’t have to wait until my next visit to Canada.

The convenience of having a restaurant attached to a theater is very appealing. Before or after a performance, all you need do is walk a few steps. It’s also a bonus when the restaurant is well regarded. No additional driving, no fuss. Fins Bistro happens to be next door to Village Theatre in Issaquah. There is even a pass-through entrance between the theater lobby and restaurant when there is a performance. Moreover, if your hankering for theater refreshment during intermission goes beyond the lobby’s candies, cookies, bottled water and coffee, you can pre-order desserts and drinks from Fins. A nice symbiosis.

As the name suggests, Fins is a seafood restaurant, with a smattering of meat and chicken entreés for the non-pescetarian.  Three of us dined here immediately following an afternoon performance (“No Way to Treat a Lady,” a musical comedy that I highly recommend for its dark humor and high camp).

One of tonight’s specials was bacon-wrapped scallops (☆☆☆), three enormous specimens that were pan-seared and served over creamy risotto. I personally prefer scallops to be a tad more cooked, those served tonight being almost raw, but it’s a minor quibble. The bacon strips were a nice, crisp counterpoint. 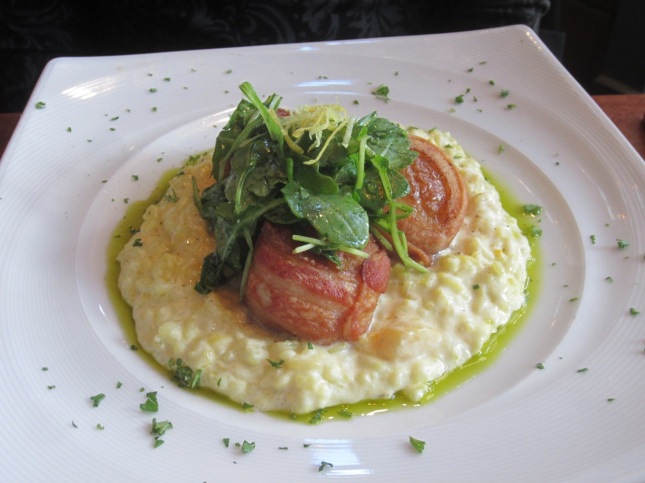 I really shouldn’t have ordered a lamb shank. It’s like ordering a steak at a seafood restaurant (and there are a couple on Fins’ regular menu) or a burger at a Chinese restaurant. After all, there were many interesting-sounding seafood dishes. That being said, the shank was quite good (☆☆☆), fork-tender as I would’ve expected, pooled in a chianti sauce reduction with plentiful vegetables and accompanied by garlic mashers. It so happens that my lamb shank ideal is made right across the street at Max’s World Cafe, so in some ways my order tonight had an element of wanting to make comparisons.

Kudos to the restaurant for squeezing our party in on a fully booked night only minutes before the performance and to our waiter who had a sense of humor and was efficient without being overly attentive.

A Hawaiian food blogger once asked me about Seattle’s ramen culture. Knowing how robust it was in Honolulu where the blogger lives, I was apprehensive about answering him. Here was the Seattle area, having as much claim as any big West Coast city to strong economic and cultural ties to Japan, a history of Japanese immigration and community, a good-sized population of Japanese nationals, a respectable ensemble of Japanese restaurants—but, no thriving ramen scene. He asked me at the same time what my favorite ramen restaurant in Seattle was. Well…uh…let me see…hmmm. The email exchange had that flavor. That was three years ago.

Mine wasn’t the only lament. Between the Bay Area and Vancouver, B.C., there really hadn’t been much to get excited about.

Then, serendipity struck. Three high-profile ramen restaurants opened almost immediately since that email conversation. Two of them had Japan connections, the other came up from Southern California.