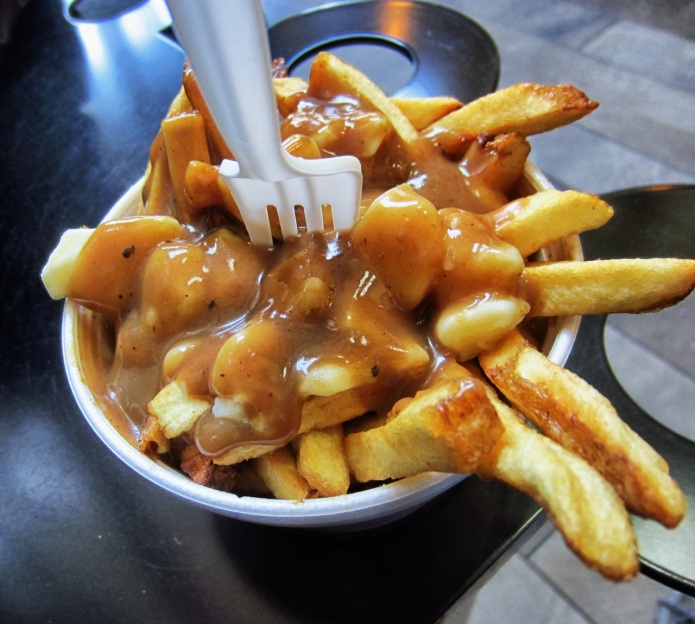 My first introduction to poutine was Zog’s Dogs in Whistler Village, up in the mountains of British Columbia. Maybe it was the rarefied air but I began to wonder what Canadians saw in this, their quintessential snack, which according to many Canadians finds its greatest expression in Montreal. Gravy and cheese curds piled on top of fries. Putting wet stuff on fries is certainly not confined to Canucks; after all, we Yanks like to smother ’em with chili. And how about ketchup?

Let’s face it, people like to smother their carbs with sauce. To be fair, the poutine at Zog’s was ordered as a topping for a hot dog, which right away presented the problem of how to pick it up and eat it. Messy. Fork and knife were enlisted. But, the gravy was insipid, uninspired, blah. I wondered if the situation could be brightened with a more flavorful gravy.

Fritz European Fry House purportedly makes the best poutine in Vancouver. My wife and I decided that we should give it another go. We ordered it plain, meaning that we chose not to pile on any of the optional toppings at extra cost (bacon, pulled pork, chicken, smoked meat). The poutine had to be evaluated in its most basic form. We were not disappointed (☆☆☆½). Even if we had to sit on one of three benches flush against the walls (there are no sit-down tables) and scoop the fries, dripping with gravy and long, melted strands of cheese, into our mouths from a shared cup, we realized this was the real deal, a gravy worth every bite, one that likewise would make any biscuit ladled with it an instant classic. Fries? Crispy at first, but got soggy under the gravy. 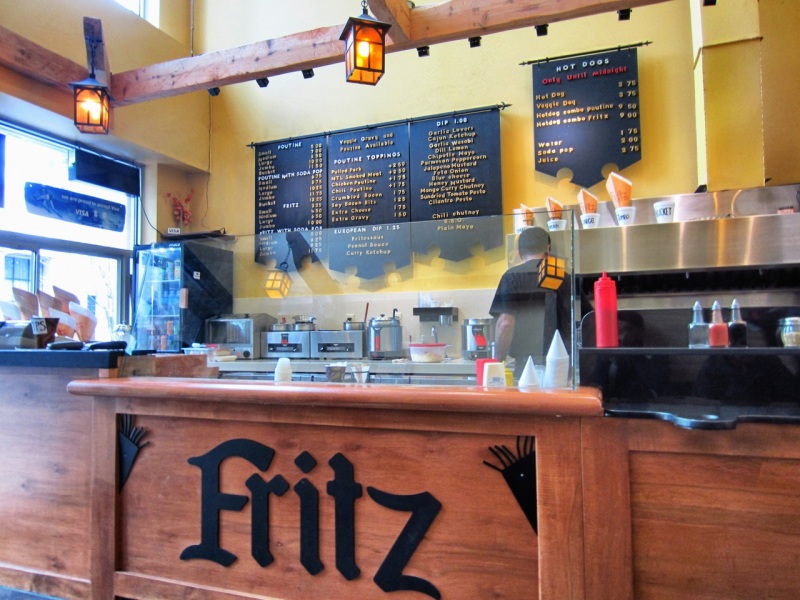 Some poutine zealots claim that the cheese curds should squeak as you bite into them, in my mind more of a sensory attribute than taste advantage. We got none of that. The cheese simply melted and became stringy that needed a deft twirling of the fork to keep under control. Mozzarella? It didn’t matter to us if the cheese made any sounds or not.

Would we get poutine again? Yes, we would. Fritz has appeared on many lists as Vancouver’s best late night snack (it’s open until anywhere from 2:30 to 4am, depending on the day of the week). At my age, that’s not going to happen. But, you know, if I were a lot younger …