The reaction wasn’t nearly on the same scale as Paseo’s passing, but the sudden closure last August of Katsu Burger in Seattle’s Georgetown district triggered waves of lamentation among followers. The word was that owner Kajime Sato was stretched too thin between the burger operation and Mashiko, his sushi restaurant in West Seattle. The concept was to add Japanese flavors to the American burger, in the same vein as the Japanification of the hot dog (Gourmet Dog Japon in Seattle, Japadog in Vancouver). A big fan, Stephanie Kang, who also has restaurant credentials, rescued Katsu Burger, re-opened the Georgetown operation in October of last year, and subsequently opened an Eastside branch in the Factoria area of Bellevue a month later, replacing her previous Kimchi Amigos. It happens to be right next door to Shanghai Cafe, my favorite Chinese restaurant on the Eastside, which is how I noticed its imminent opening.

How can so many tables and chairs be crammed into their minuscule space? If you eat your meal at one of the interior tables along the south wall, other patrons have to move out of the way for you to exit. One wonders how this arrangement doesn’t violate a fire code. 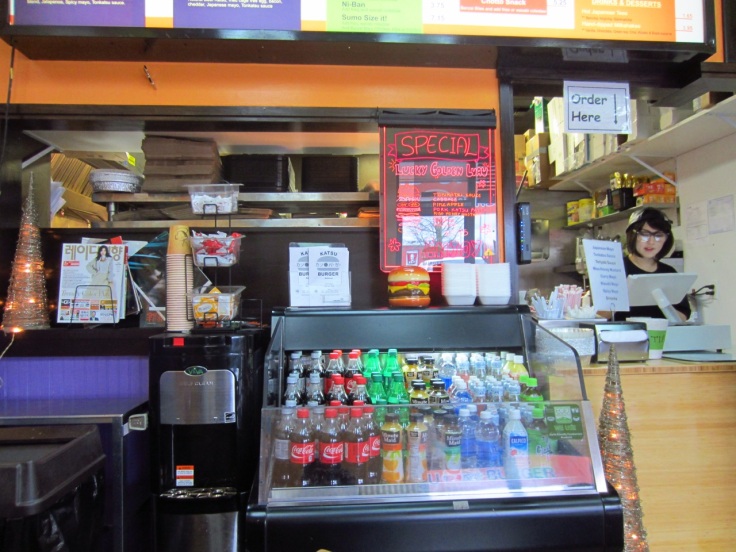 Cramped space aside, the interior design is whimsical, with an eclectic mix of Japanese pop culture artwork, anime, woodblock prints and ninja throwing stars (shuriken) partially embedded in the walls. A collage of Godzilla images is mounted on the south wall. 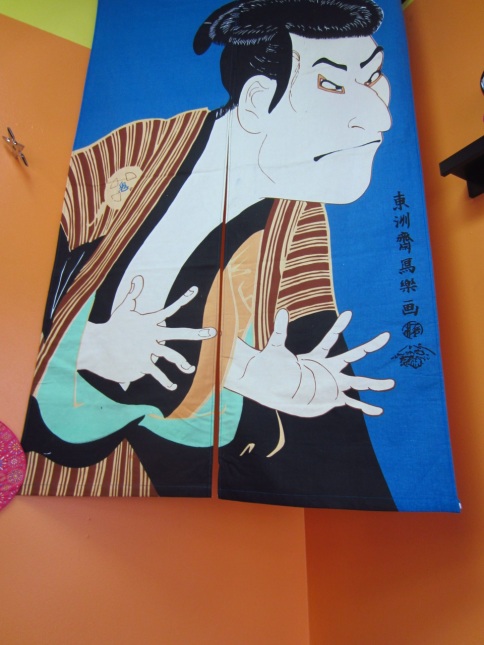 The whimsy extends to the menu, where some burgers take on humorous names. The word katsu refers to coating some sort of seasoned meat with panko and deep-frying it. Pork katsu (tonkatsu) is the most common at Japanese restaurants and appears in the Ninja Deluxe and Katsu Curry burgers. There is also a chicken katsu that shows up in the Teriyaki Chicken burger and, for vegetarians, the Miso Honey Tofu. But, burgers are usually about ground beef. It is the main ingredient in the Tokyo Classic, Ohayou Gozaimasu and Samurai Select. And the beef is grass-fed, at that. They vary in their accompaniments. It also is the protein in the one I ordered, the Godzilla Attack burger. I’d never had a beef katsu before, let alone in a burger, but the idea of battering and frying it held great promise for keeping the meat moist, which would address the biggest problem of burgers these days.

The burger was attractively wrapped in red-and-white checkerboard parchment paper. Unwrapping it divulged a big sandwich piled high with tomato, onion, sweet pickles, a generous hank of shredded cabbage that stuck out like Godzilla’s fins. and sliced jalapeño peppers, 12 spice blend, pepper jack cheese and spicy mayo that roared his fiery breath. One bite revealed a superior bun that had a sheen of egg wash. Sure enough, the beef patty was juicy, helped by the fact that it was generously sized, about 3/4″ thick, its crispy panko batter crackling with every bite. But, it wasn’t strongly beefy in flavor. Tonkatsu sauce, which pairs nicely with pork, seemed out-of-sync with the beef, a bit too assertive perhaps, and the spicy mayo reminded me that I prefer my burgers without sweet flavors, the reason I’m not a big fan of de rigueur thousand island dressing and many ‘secret’ sauces. These quibbles aside, Godzilla Attack is a fine sandwich (☆☆☆) with superior ingredients.

Fries are extra. I would highly recommend getting them because they’re perfectly fried, not in the least mealy or too crunchy. Katsu Burger’s riffs include a sprinkling of sea salt, curry, 12 spice blend or nori. The last has just enough of a dusting of aonori to give it outstanding flavor (☆☆☆☆).

As a practical joke, Sato (the original owner) put the Mt. Fuji burger on the menu. It is a super-sized sandwich with the trifecta of meats (beef, pork and chicken), American and pepper jack cheeses, fried egg, wasabi and spicy mayos and tonkatsu sauce, not to mention the fresh vegetables. Even (currently) priced at $18.95, patrons do buy it, proving once again that it’s possible to sell anything if it’s outrageous enough.