A five-course omakase dinner for two at Miyabi 45th for $60? Yessiree, Groupon. I was motivated because of an excellent soba lunch that I had there recently.

The Groupon special is not the only way to have this kind of dinner. A party can otherwise decide how much to spend per person and the Miyabi kitchen will do the rest, though it won’t have Groupon’s value. The five courses were either four appetizers and soba or three appetizers, soba and dessert. We chose the former.

The waitress first asked if we had any allergies or dislikes after we looked over the regular and specials menu. When we answered no, this turned out to mean that anything from the menus would be fair game for omakase.

Dinner started with an amuse-bouche of Castelvetrano olives with a light touch of sesame oil.

The first course was a shared plate of pork paté studded with gorgonzola cheese (☆☆☆½). This was substantial stuff, full of pork flavor, dense and fatty. The coarse country-style spread easily broke apart the thin, baked pita-like triangles. It was easier to eat paté, dipped in whole-grain mustard, and cracker separately, still a winning combination. The incorporation of yuzu was difficult to detect. Served on the side was a salad of arugula, Japanese pear and roasted yellow beets, tossed with a very good dark vinaigrette.

Next arrived a shared plate of raw oysters. Neither my wife nor I are oyster fans. What I mean is that we have never been head-over-heels enamored of their briny essence, what samples we’ve tasted thus far. But they were placed before us, having told the waitress we didn’t have any dislikes. The oysters were not served plain but topped with fermented black garlic. Simply stated, they were delicious, surprisingly sweet and savory with barely a hint of garlic. But for bits of shell, they were outstanding (☆☆☆½), readjusting our attitude toward oysters. 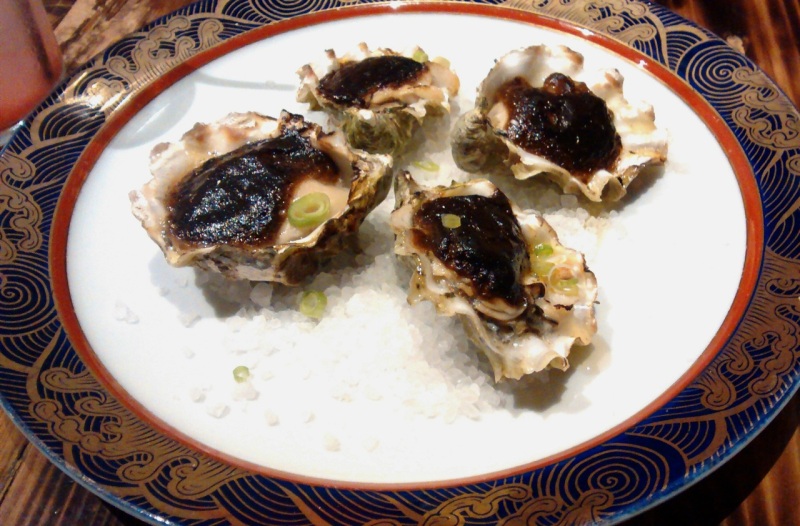 Grilled sardines were next. These weren’t tinned small fries but were in the neighborhood of 8 inches. We each got our own fish. Sardine is mildly fishy with trout-like flesh texture and lots of pin bones, most of which can be carefully avoided. Again, this was a dish we normally wouldn’t have ordered on our own. To enhance flavor, the sardines were coated in shio koji before being grilled, resulting in another fine appetizer (☆☆☆). 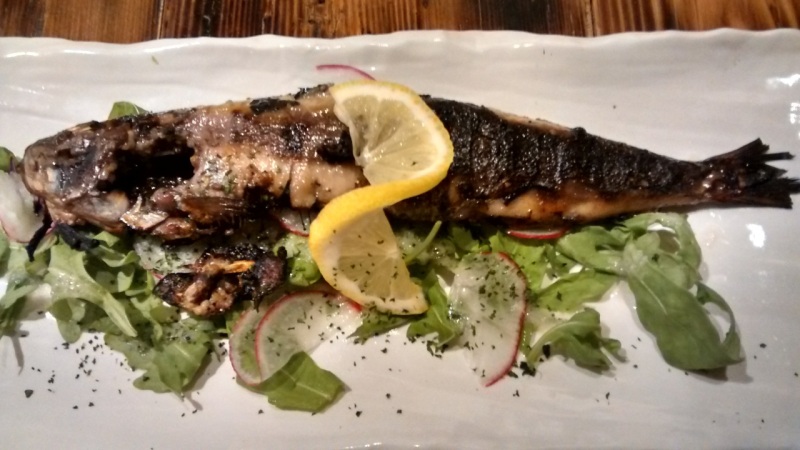 Next was braised pork belly (☆☆☆☆), another shared appetizer. The fat-averse, which includes my wife, would shy away from this dish, meat comprising more or less half of each slice. But even she admitted these were pretty special. The bellies were braised in a concentrated broth of dashi, soy sauce and sugar to be sure, with other secret ingredients. A small amount of it pooled at the bottom. The pork was topped with a generous pinch of Korean chile threads. On the side were two halves of perfectly cooked ajitsuke tamago.

The main course was soba served nanban style, meaning the soba noodles are mixed together with hot broth, like ramen. In keeping with the season, the soup featured sliced matsutake mushrooms and leek, both contributing their unique flavors. When served nanban, soba takes on a soft texture yet keeps its slightly springy integrity that wheat-based noodles (like ramen) can’t. Although I liked the chyashu seiro soba better, this was still a great bowl of noodles (☆☆☆½).

Omakase is an opportunity to try things you might not ordinarily choose, as we can attest. It ends at Miyabi with soba, the restaurant’s specialty. Chef Mutsuko Soma trained with a master in Japan to make it from scratch, which she continues here. There isn’t a better place to try it, while at the same time sampling the creative dishes that come out of the kitchen.