A cookie, or biscuit as it’s called in New Zealand, that started out as a practical way for Down Under mothers and wives to send spoilage-resistant cookies to their sons and husbands on the front lines of World War I, is arguably the iconic cookie of New Zealand and Australia.

My first taste of the Anzac biscuit was in a café somewhere outside Wanaka, while on tour with a bus company. Its ingredients of rolled oats, dried coconut, butter, flour, baking soda and sweetened with sugar and golden syrup were revelatory; I’d never had such an unexpectedly crispy cookie, almost as hard as biscotti but denser, be so delicious. Anzac is an acronym for Australia New Zealand Army Corps.

Since that time, I’ve made several purchases of it, entirely in Kiwi supermarkets, packaged in quantity. These were certainly adequate, satisfying mostly the memory of the 2010 bus trip. Then today we came across a bag of Arnott’s Farmbake Golden Crunch cookies, a not-so-coded trade name for Anzac biscuits, at Countdown market. And while there’s no mistaking them for freshly baked, they are the best we’ve had coming right out of a bag. 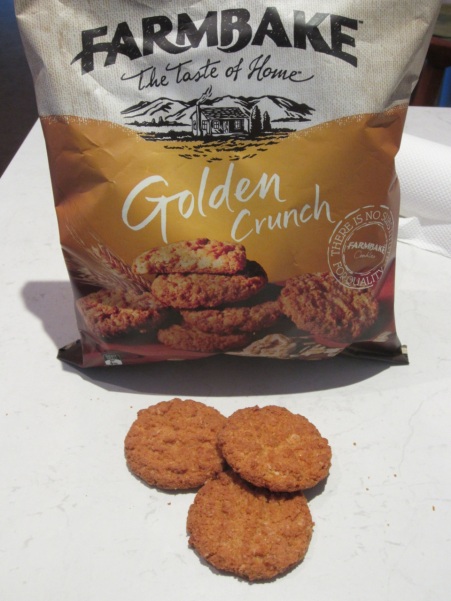