Air New Zealand has a Premium Economy (PE) class that the airline touted as a significant step forward in comfort and service for economy passengers when introduced in 2010. Is it worth the more-than-double fare over economy?

On a flight between Los Angeles and Auckland, my wife and I upgraded to PE. I’ll explain how below. But first, let me describe our experience.

From the marketing, it surely seemed that our flight experience could be vastly more agreeable. The first improvement we experienced was the premium check-in line shared with business class. No hassles and, at the time of our check-in, no line.

PE seats are a big step forward in passenger comfort. On a Boeing 777-300, the seating configuration consists of six seats across, in groups of two separated by the airplane’s double aisles, a 2-2-2 arrangement, as compared to economy’s 3-4-3. The seat looks more like something out of an Apollo lunar module, which ANZ calls a Spaceseat. Made of ivory-colored leather and surrounded by a color-matched hard plastic shell, they contour to the body better than economy-class seats, with ample width for a large person and separate controls for reclining angle and tilt, though they’re awkward to operate. When reclining, the seat slides forward rather than leaning back into the space of the passenger behind. There is noticeably more legroom, enough to cross your legs easily or stretch them out. For electronic devices, a universal power port is provided as well as a USB port. 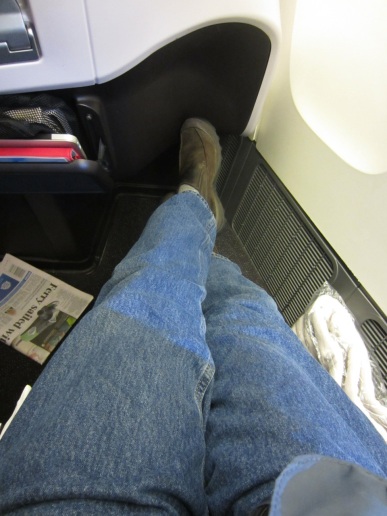 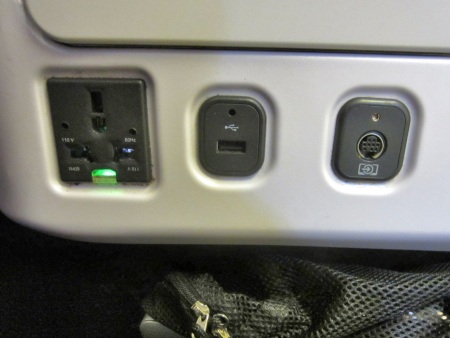 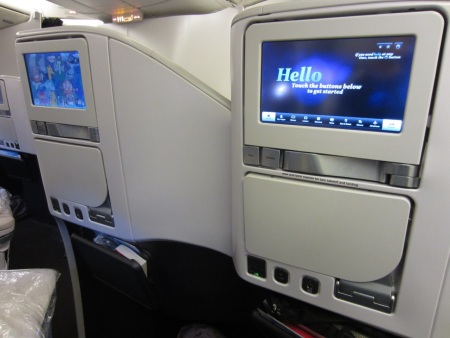 The seats don’t point forward like they do in economy, but are rotated roughly 30 degrees, a design that provides more legroom at the expense of a loss of overall lateral space in the cabin.

PE occupies an entire section of the aircraft, meaning curtains are drawn between economy and business classes. and two toilets are dedicated for 44 passengers. The surprising amenity was a dispenser of hot cloth face towels.

Aside from cramped seating in economy class, one big reason I dread long flights, especially overnight ones, is my inability to sleep well when sitting. My head tends to bob forward when I get drowsy—and that wakes me up. ANZ claims their PE seats recline 50% more than economy’s. Coupled with more leg and seat room, the greater recline was enough for me to sleep better. And while sleeping at any position other than supine is not ideal, I was still able to get about 7 hours of shuteye, even if I had to shift my body around occasionally, a remarkable achievement for me. The topper was that I didn’t watch a single movie during the flight, extraordinary considering that during another flight to NZ on economy last year, I watched four to cut the tedium.

When we first boarded, at each seat were waiting bottled water, blanket, pillow with pillowcase and noise-canceling headphones. The headphones would prove to be adequate, greatly cutting down on cabin noise, but our Etymotics ER-6i isolator earphones were much more effective. Shortly, the flight crew handed out to each PE passenger a felt bag which contained complimentary eye mask, lip balm, moisturizer, foam ear plugs, toothbrush and toothpaste and a pair of socks. The socks can be used for extra warmth when you rest your unshod feet on a bean bag that serves as a foot rest. As soon as the aircraft reached straight-and-level, the flight crew passed out hot cloth hand towels, followed by orange juice and sparkling wine.

And what about the meal? We were handed a menu for dinner with a choice of three main entrées. 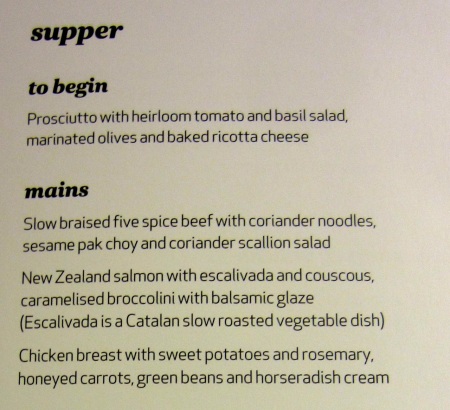 Would you believe a starter? Prosciutto with heirloom tomato and basil salad, marinated olives and baked ricotta cheese. It was served on a tray with dessert (cheesecake), which made me wonder about where the main dish fit into the sequence. It was to come later, placed on the same tray after the flight attendant recorded your selection and after offering a choice of three types of bread served from a basket. And how was the quality of the food? Very good as airline food goes, I’m happy to say, leagues better than what we normally got in previous flights in economy to New Zealand. My braised Asian-flavored beef was very tender, as was my wife’s salmon, flaky from not having been previously frozen. Flavors of both were good, more interesting than standard economy grub.

Breakfast, which in my experience is the least considered meal of airlines, was likewise a nice surprise. Again, the hot hand towel. Nice touch. Juices and coffee were served first. Next came a tray with fresh fruit and strawberry yogurt. The flight attendants refilled coffee and tea, served a croissant and took passengers’ hot meal orders. We both were surprised by how pleasant the breakfast experience was. 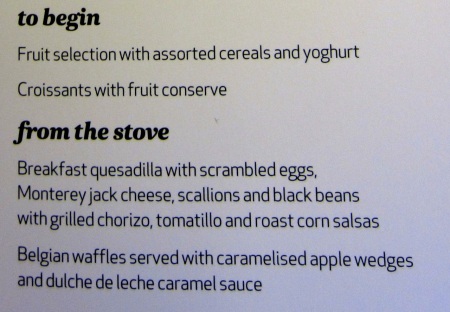 The meals, in short, were a pleasure to eat rather than a means to pass the time, unhurried and more relaxed.

How is it that we got Premium Economy? ANZ has a program called OneUp in which passengers can upgrade one class by submitting bids as late as six days prior to departure. Bids, tendered as additional amounts over your base fare, have to be made separately on both inbound and outbound legs. Last year, our bids were summarily rejected. This time, we made similar offers but instead, for the LAX-AKL leg, were given an opportunity to improve the bid, which I did by a small amount. For $295 per person, the offer was accepted. (As time draws near, I’m sure we’ll be given the opportunity to rebid on the return flight.) So, the question at the beginning was, is it worth the extra roughly $2,000 roundtrip to purchase a PE fare outright? For us personally, no. Though our experience was undoubtedly excellent, it’s still a lot of money. But, we would be highly motivated to play the OneUp game when offered.

2 thoughts on “Is Air New Zealand’s Premium Economy Worth the Extra Airfare?”