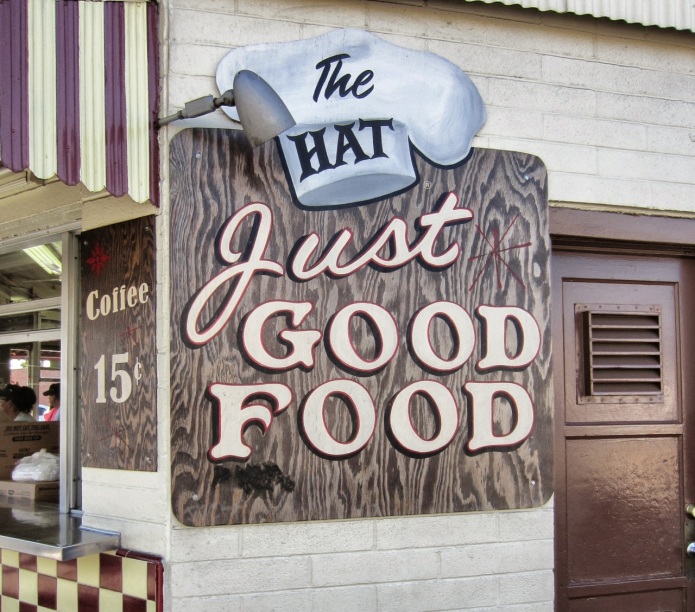 At the risk of repeating my previous post’s circumstances, I can’t recall how many times I’d driven past The Hat in Alhambra (California) and not stopped. Though I live in Seattle, my in-laws live in the restaurant mecca of the San Gabriel Valley. As if by self-proclamation, “World Famous Pastrami” plastered on signage dares you to pull into the parking lot. This location of The Hat has been there since 1951, which by itself should’ve provided incentive enough (if not curiosity) for me. Still, it wasn’t until my friend KirkJ enthused over the sandwich he and his wife had at another location in Southern California that I finally decided to sample the sandwich.

Both Johnnie’s and The Hat are fast-food restaurants, not delis. More than that, theirs are pastrami dip sandwiches in which the bread is moistened with the meat’s steaming juices, a style endemic to Southern California. Rather than pastrami slices being served on rye bread, French rolls are used, being closer in concept to a roast beef sandwich au jus. (To be fair, Johnnie’s and The Hat do have a pastrami sandwich on rye, but their fame rests with dips.) It may be that rolls are better able to withstand dipping without disintegrating, but this is my own guess. The real reason may very well be more historical than practical. The other important distinguishing characteristic is that the meat is mechanically sliced very thinly, about 1⁄16“. Many a great pastrami restaurant pride themselves on hand slicing. Purists may balk at the likes of The Hat for being nothing like what is traditional on the East Coast (most famously the Jewish delis of New York City), citing the “classic” pastrami sandwich at Langer’s Deli on Alvarado in L.A., served with cole slaw and rye bread, as being more authentic. I’ve enjoyed the mountainous version at Manhattan’s Carnegie Deli, fully six inches high, served between excellent rye bread with a wonderful crust—and their complimentary pickles at every table were fantastic.

When I arrived at The Hat today at lunchtime, the parking lot was packed with cars. Lots of customers were eating outside on picnic-style tables in the back, covered by an awning, and more standing in front. Even so, I was able to walk right up and place my order, within five minutes ready to be picked up. There was a generous amount of meat between a split French roll, the bottom half spread with yellow mustard and thin pickles (☆☆☆). This presentation is different from Johnnie’s where mustard and pickles are served on the side. The pastrami at both is comparable, tasting of spices and herbs, salty and peppery, garlicky, glistening with brisket fat, and above all, delicious. 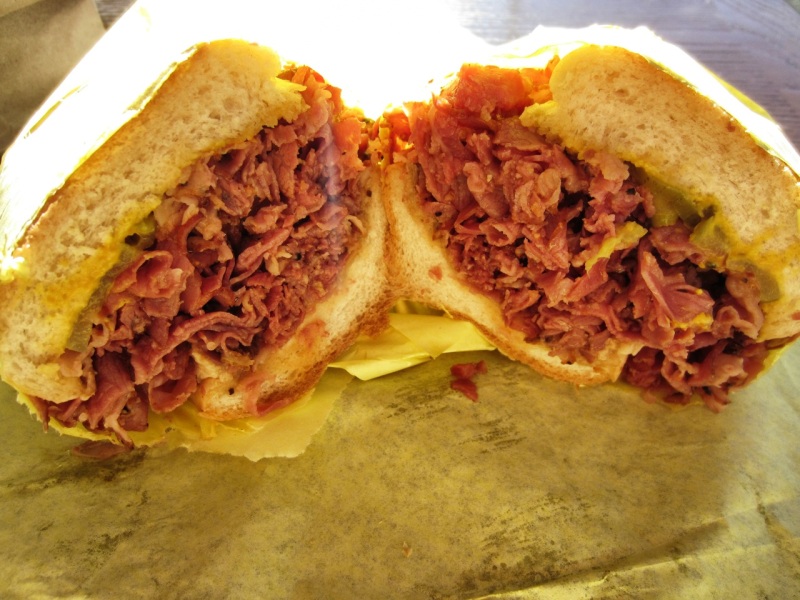 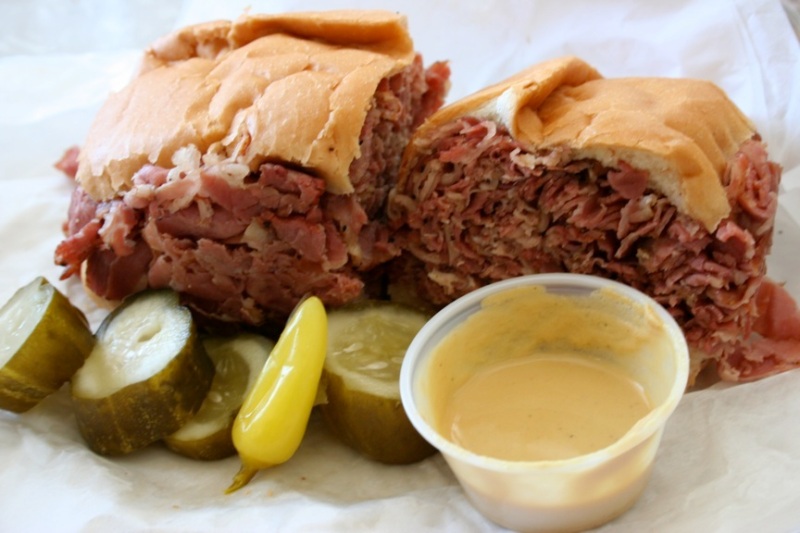 My preference is Johnnie’s (☆☆☆½), not only because of the tastier jus but the fact that mustard (which is spicy) and pickles are served separately and The Hat’s roll seems drier. Someone on Chowhound rued that in the 1980s, the bread was lamentably changed from a crusty outside and soft inside, to today’s style. Two of my wife’s sisters said flatly that they also preferred Johnnie’s. Still, the Hat’s version is no slouch. If you want a wetter sandwich, order it double-dipped. Each has its fierce defenders and many traditionalists decry both. A lot may boil down to whether you like your pastrami sandwich wet or dry. At present, the sandwich at The Hat is $7.99, Johnnie’s is $10.95 (cheese extra).

Update (1-3-15): Not wanting to pass final judgment on The Hat, I didn’t let the opportunity go by of ordering pastrami double-dipped today. As I suspected, this was much more to my liking, dry bread no longer a barrier to the sandwich’s full enjoyment. In fact, the bread was too wet, the result of the extra juices and steaming in the wrapper on the way back to the house. In spite of tackling a big, sloppy sandwich, this is fully the equal of Johnnie’s, a great Southern California-style pastrami sandwich (☆☆☆½). 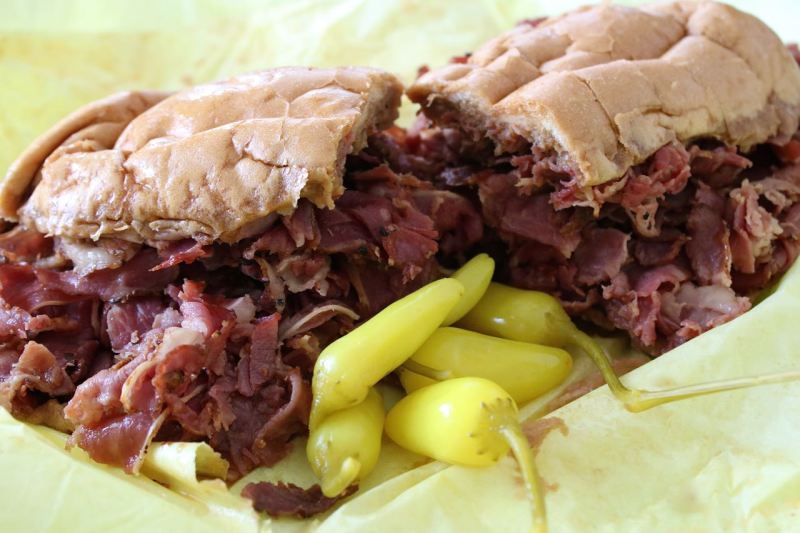 Update (10-15-18): The only thing that’s changed since the last time is the wrapper, now customized with repeating patterns of The Hat’s logo. Otherwise, it’s the same great, generous, messy pastrami sandwich, double-dipped, which is now $9.99. 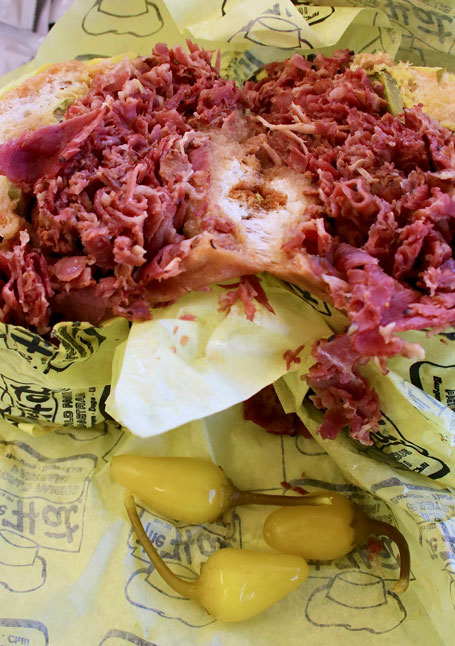 21 thoughts on “Pastrami Dip Sandwich at The Hat (Alhambra, CA)”