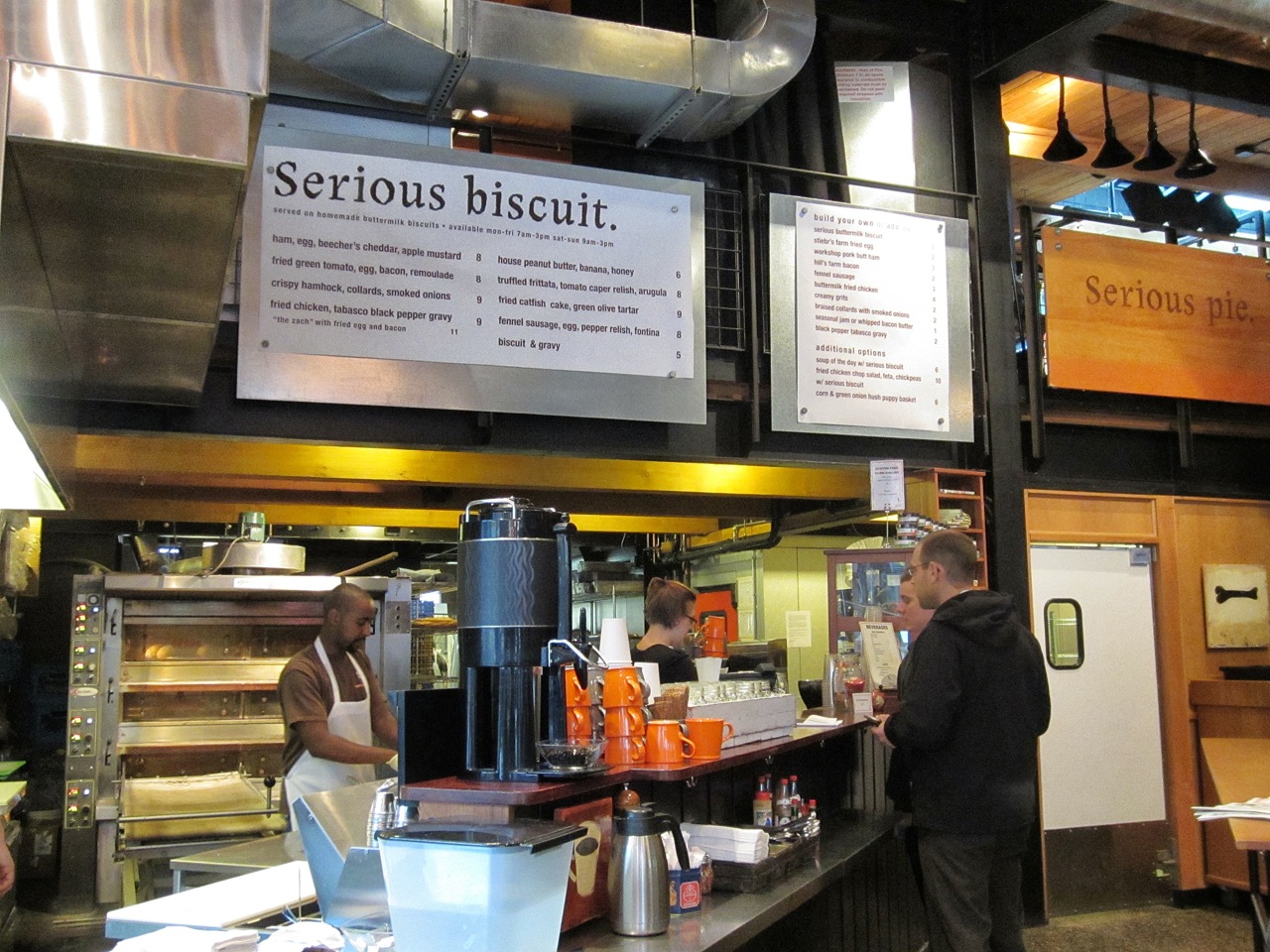 The buzz has been good. Our friends who raved about The Reggie at Pine State Biscuits in Portland gave a thumbs-up to The Zach, as the biscuit topped with fried chicken, gravy, bacon and fried egg is called at Serious Biscuit. The creations are similar at both Northwest diners, the only difference being the inclusion of cheese in one (Pine State), an egg in the other, though the Reggie Deluxe does include a fried egg. Since Serious Biscuit, located in South Lake Union, was on the way to North Capitol Hill where we were going to spend the day, my wife and I made it our breakfast stop. It’s conveniently located for bus commuters, too. Scores of Amazon employees were walking past as we were seated in the small dining area, the lower portion of two eating spaces at this address. For lunch, Serious Pie opens for business upstairs. These are two other restaurants in the Tom Douglas empire.

At Serious Pie, you order at the counter, then take a seat. When the order is ready, your name is called and you pick it up at another counter. One price gets you bottomless Starbucks coffee, which you pour for yourself from a dispenser. Only a few tables take up the small dining area, though customers are free to take their breakfast items up to the second floor before Serious Pie opens for business at 11am.

Trying to restrain myself from an overload of calories, I decided against The Zach and ordered just the biscuit with fried chicken and Tabasco black pepper gravy (☆☆☆½). The chicken was seriously good, two boneless thighs wrapped in a nicely seasoned, thick but not too crunchy batter. It’s possible that the bird had seen some bathing in buttermilk prior to frying. But, this place specializes in biscuits—and their’s are equally seriously good. Generously sized, they simply consist of flour, butter and buttermilk, and their lumpy, nicely browned crowns meant that the dough had not been overly worked. The gravy, described only as Tabasco black pepper gravy, was the only thing that detracted from a superior experience. It was too bland, like thickened milk with peppery bite. In fact, I preferred to use the Aardvark habañero hot sauce (made in Portland) for the chicken, one of two locally produced bottled sauces that customers can use. Would the addition of bacon and egg (The Zach) have been a tastier choice? Maybe, but then I would have had to leave even more uneaten, as my breakfast was more than enough to feed a mere mortal. If only the gravy was tastier …!

My wife was interested in a healthier alternative, namely, biscuit with truffled frittata, tomato caper relish and arugula (☆☆☆). The same superb biscuit arrived with a fistful of arugula and a square frittata tasting of truffles and herbs. The yummy relish was only spread on the bottom biscuit half; my wife wished it were on the top, too.

Serious Biscuit is one more feather in Tom Douglas’ hat. We’d have to try the pizzas at Serious Pie to see if it’s another.