As if driven by some unseen force, my wife and I felt compelled again not to let a rainless day in Seattle go by without our doing something outdoors. After a deluge of a month in September, October has been extremely dry. In the last week, it has been foggy, lingering well into the afternoon, occasionally with the sun breaking through late in the day. The nights have been getting chilly as fall weather encroaches, but the combination of partially sunny days and cold nights have joined forces to produce one of the best displays of local fall color we have seen in a while.

We hopped onto the bus into the fog-enshrouded morning and headed across the bridge once again. Our destination today was the Capitol Hill neighborhood of Seattle. But, first, we had to get down to the serious business of breakfast, namely, breakfast at Serious Biscuit, one of Tom Douglas’ restaurants, in the South Lake Union (SLU) district.

After breakfast, we walked east on Harrison and north along Eastlake, then Lakeview Blvd. Lakeview is like a giant curved overpass over Interstate 5 to get from SLU to North Capitol Hill. Starting near the REI flagship store, the overpass soon enough gives a dramatic view of Lake Union to the west (but not today because of the fog) and, further up, the juxtaposition of I-5, its express lane and the long southbound offramp to Mercer Street. Noisy as it was, peering over the guardrail, I couldn’t help but be amazed by the three-dimensional flow of traffic. Past all this, Lakeview becomes a residential street with the underside of the freeway to the west.

Soon (and unexpectedly), we came across an impressive mountain bike skills park built among the I-5 colonnades. Bikers can hone their technical skills by traversing and maneuvering the well-laid out, uneven surfaces and obstacles spread out over two acres. 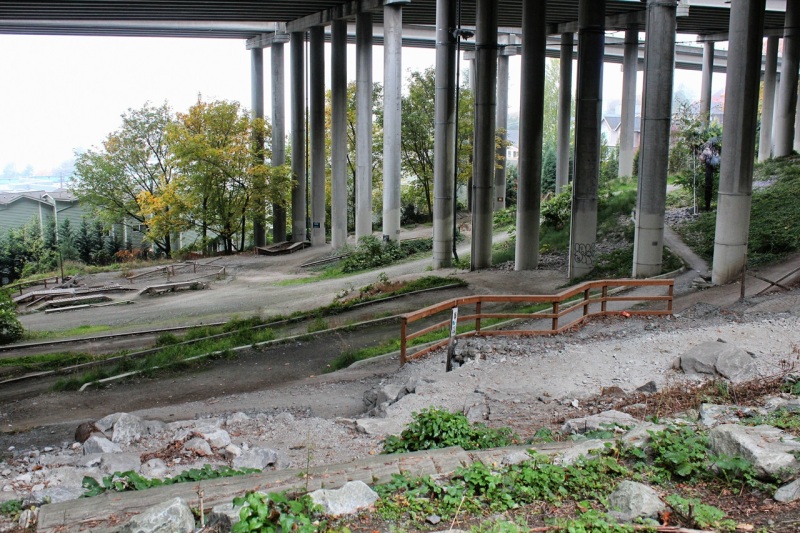 I’ve included here a short video by Kent Kangley from YouTube that demonstrates tackling one of the courses.

Through the middle of the bike park cuts Seattle’s longest stairway that begins under the western edge of I-5 near Franklin Avenue, the Howe Street Stairs, one of many in Seattle that are essentially continuations of streets built over hillsides. Climbing the 388 steps, we frequently ran out of breath, as if ascending a steep mountain trail. Our legs might’ve given out if it weren’t for periodic landings between successive courses where we could rest our tiring thighs and calves and catch our breath. As it turns out, just one block south is another long stairway, the Blaine Street Stairs, that claims 293 steps, which we’ll have to do another time. Some people make running up these stairs a regular part of their cardio routine. 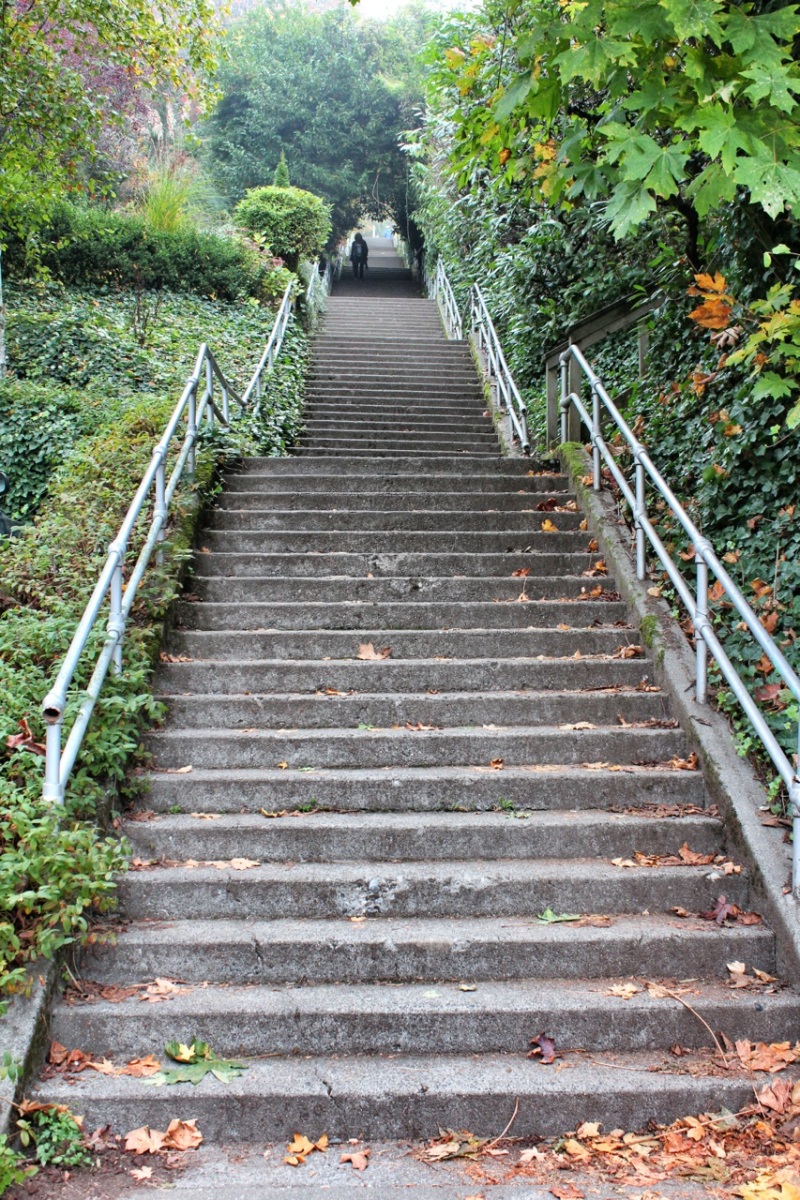 Portion of the Howe Street Stairs

From the top of the Howe Street Stairs on 10th Avenue, we walked to Lake View Cemetery. Among the notables buried there, perhaps the most visited are the gravestones of Bruce and Brandon Lee, set right next to each other. Neither my wife nor I am particularly a Bruce or Brandon Lee fan, but as we were in the vicinity, we did visit the gravesites. Walking back to the cemetery entrance, we passed two of the largest specimens of Japanese laceleaf maples we had ever seen, planted on either side of the gravesites of two people in whose memory, we presume, these maples were planted. I estimate them to be approximately 100 years old. 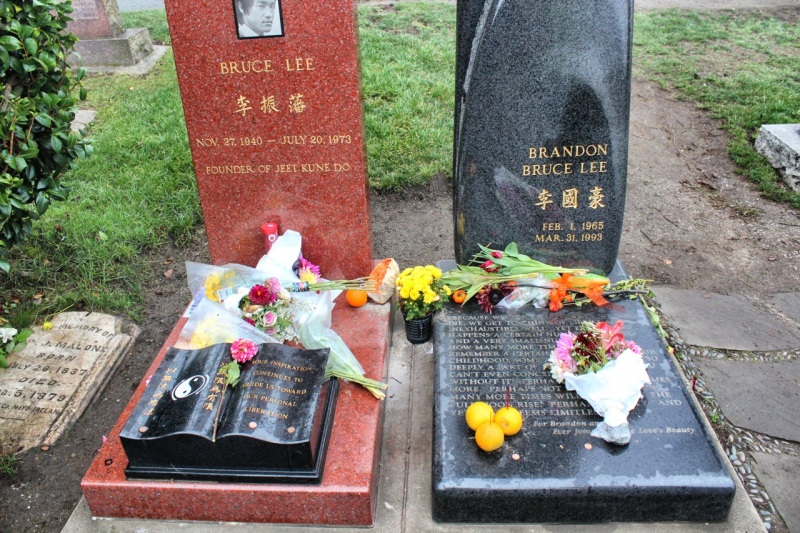 Tombstones of Bruce and Brandon Lee 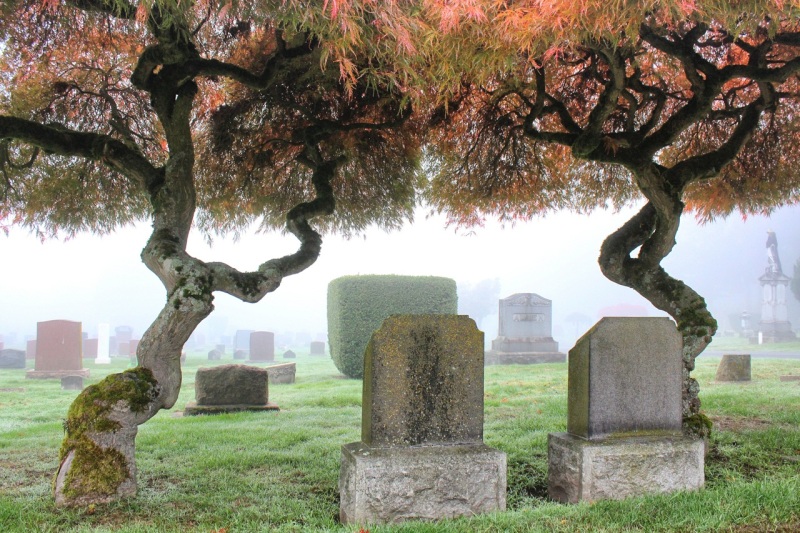 Our next stop was Volunteer Park, immediately to the south of the cemetery. It got its current name in 1901 to honor veterans who volunteered for the Spanish-American War. The park is one of the most beautiful in Seattle. The landscaping is stunning, exemplary of the Olmstead vision of making public spaces available to everyone and design unfettered by too many man-made structures. The Seattle Asian Art Museum, which replaced the original bandstand, is located on the grounds, directly across the street from a sculpture by Isamu Noguchi, called “Black Sun” (as well as the more prosaic “The Doughnut”) and a fenced-off water reservoir. On a clear day from the sculpture area, the the Space Needle can be seen and is often photographed through the “doughnut hole” (see top image).

On the southern end of the park is a 75-foot water tower. We climbed its 106 steps (which made 494 for the day), arranged in a helix (one of two sets of stairs), to the observation deck that has sixteen windows with commanding views, partially obstructed by thick mesh wire, and informational panels about the Olmstead Brothers and the Seattle park system.

Perhaps the most captivating feature of the park, aside from tree specimens that are among the oldest in Washington state, is the conservatory, which houses many beautiful plants. My wife and I recall, having visited when our kids were still very young, that the conservatory was unkempt and in a state of some disrepair. Since then, the Friends of the Conservatory has done a fine job of cleaning it up and maintaining the building and its collections. Among the collections are impressive areas of succulents (including cacti), orchids, tropical and carnivorous plants. Admission is $4 for adults. 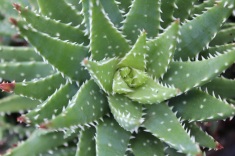 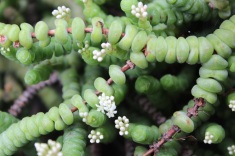 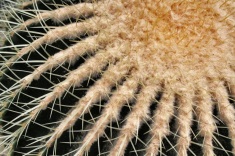 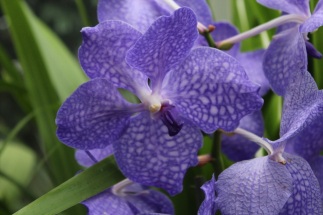 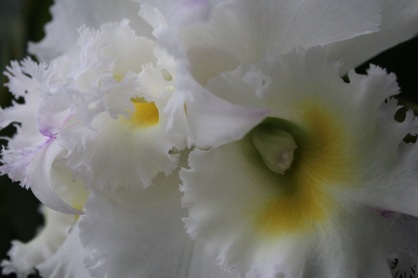 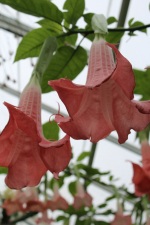 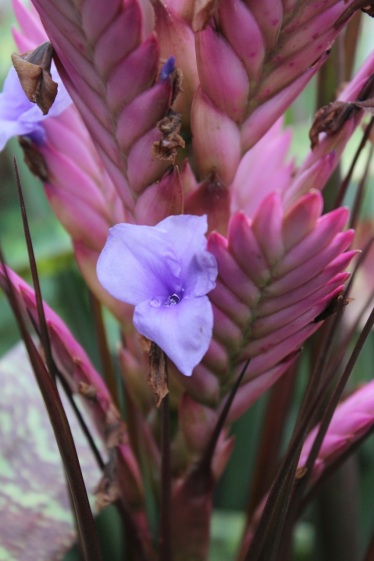 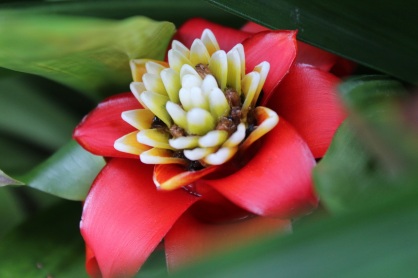 In front of the conservatory is a statue of William Seward, Abraham Lincoln’s Secretary of State, that was originally made to commemorate his “folly,” the purchase of Alaska.

The northern part of Capitol Hill has some of the oldest homes in Seattle, many of them mansions. The streets are lined with very old trees, though few are older than the homes themselves that were built in the mid-nineteenth century. Quite a few of them are over 100 years old. The effect of walking among these giants along the less-trafficked streets is quite spectacular, especially now since most of them are changing color. As tiresome as raking is to a homeowner, for the pedestrian fallen leaves have a soothing effect as they soften the hard edges of man-made lines and surfaces and provide artistic contrast to the backdrop of green of the lawns and evergreens.

After Volunteer Park, we headed southwest to Capitol Hill’s commercial district. Personally, this is the least interesting part of Capitol Hill. Nonetheless, the area has quite a few fine restaurants and other small businesses, the main strip being Broadway that runs north-south. It is a culturally diverse area that caters to the large LGBT community and the students of Seattle Central Community College. Even if it were lunchtime, we weren’t hungry.

As we passed E John St, we noticed a boarded-up area stretching several blocks to the south that will shortly (perhaps in 2016) be an underground light rail station operated by Sound Transit. We could catch a glimpse of the construction undertaking by peeking through little portals along the plywood walls. The excavation has been immense. The giant Kroll Crane was operating nearby. Photographs from the construction site are here.

Abutting the soon-to-be light rail station is Cal Anderson Park, where the Lincoln Reservoir used to be, now buried and replaced by underground tanks. Today, it is a multi-use park that was rescued from a seedy past by neighborhood activists. It now has a baseball/softball field, large grassy areas, tennis courts, play area, walking paths and its most striking attraction, a water feature consisting of a stone-covered, asymmetrical cone whose top sends water rippling down the textured surface, into a pool that drains along a sloped channel into a wading pool. The only waders today were seagulls, as public wading ends in September. In 2009, Cal Anderson Park was voted by Forbes.com magazine as one of the twelve best U.S. city parks, surprisingly mentioned in the same breath as New York’s Central Park and San Francisco’s Golden Gate.

Our final stop today was Elliott Bay Book Company that several years ago relocated here from the Pioneer Square area. The old bookstore was a Seattle institution, which (like the old and original REI store in Capitol Hill) was composed largely of various, seemingly self-contained spaces tied together by creaky, wooden floors and historic ambience. Its rambling design gave it much of its character. Though the new store is splendid, more interesting and inviting than a Barnes & Noble, it’s still a shadow of its former self. We wound up having a bowl of soup in the bookstore café.

As we waited for our bus on 2nd Ave and Stewart to return home, the fog hadn’t yet completely disappeared so close to Elliott Bay. The specter of a tall skyscraper partially obscured by fog was too interesting not to photograph. 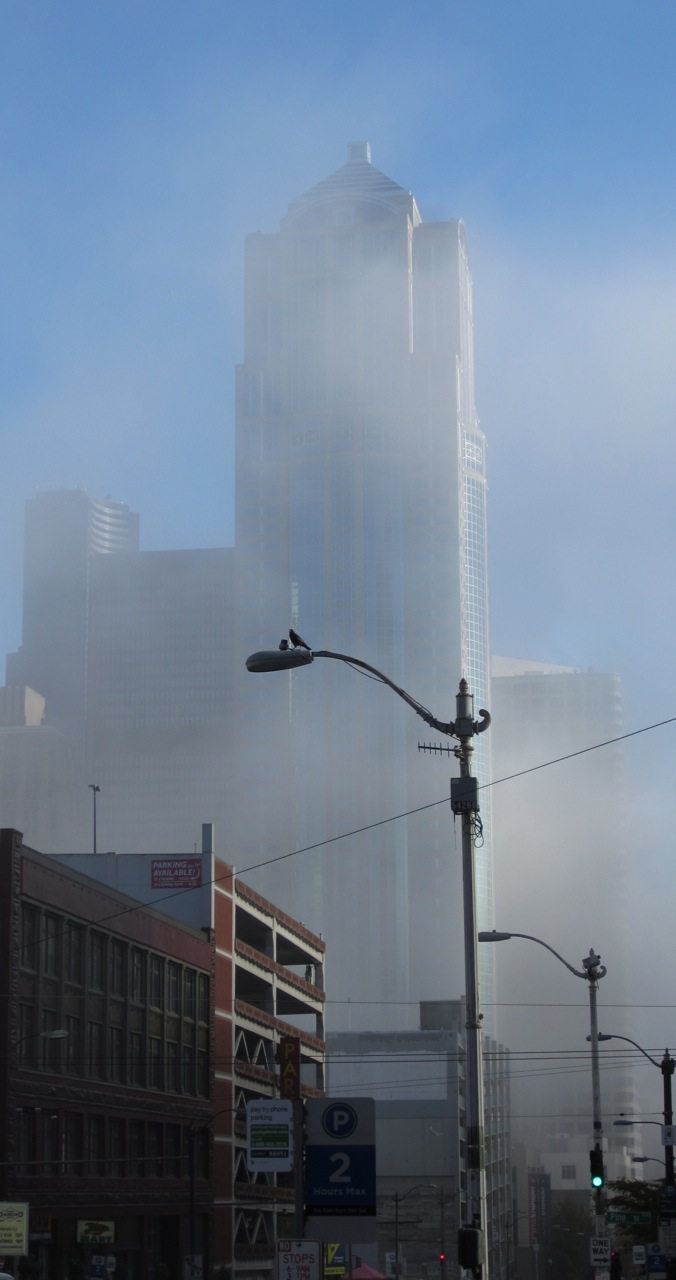