When chef Cheng Biao Yang, one of Seattle’s luminaries of Chinese—and specifically Szechuan—cooking sold Szechuan Chef to pursue another restaurant opportunity, fans began to wonder the inevitable. Would there be a decline in quality? As the weeks went by, there began to be reports that, yes, things have started to go downhill. I used to go there regularly when chef Yang was at the helm, always impressed with the menu. In particular, visions of Chongqing Chicken and Szechuan Dungeness Crab danced in my head. The Cumin Lamb, with its copious use of the musky herb that never appealed to me, had legions of fans. I went one more time without having realized that ownership had changed hands, but I noticed an entirely different wait staff. I don’t recall what I ordered, but I do remember that the dish tasted differently than before, not quite as good. When I found out that chef Yang had gone, I made the decision not to come back. That was back in 2009.

For lunch today, we decided to have some banh mi at Yeh Yeh’s Vietnamese Sandwiches, which opened a branch last year in Bellevue after the original Lynnwood restaurant started getting rave reviews. Aren’t most restaurants open on Sundays? Not Yeh Yeh’s, as we discovered when we drove up. So the next choice was Kukai Ramen (in the old K-Mart Plaza now dominated by Wal-Mart Neighborhood Market) that has been getting lots of kudos since its opening only months ago. It was 1:30 in the afternoon and there was a line of people waiting outside. Apparently, this is always how it is. Maybe we should go to Szechuan Chef? I asked my wife. I thought you didn’t want to go there again, she replied. Hesitatingly: Maybe we should see if things have improved. My wife, ever the good sport, agreed to go.

The interior was the same as it was before, except that the walls were lined with sconces that looked like a full moon glowing through a thick fog. A poetic touch. Better yet, the tables were mercifully more diner-friendly than before when the legs were big rectangular posts that bumped up against your knees. The walls were painted in lighter tones. The same line of plastic bamboo stalks separated the entrance from a portion of the dining room.

A big plus was that the lunch menu was being observed seven days a week. On the regular menu, Chongqing Chicken and Szechuan Dungeness Crab would have to wait for another day. Instead, we ordered Pickled Pepper Chicken and Hot Black Bean Shrimp from the lunch menu.

Hot and sour soup was bracingly tart from an excess of vinegar. It wasn’t unpalatable but did downgrade a soup otherwise fine with the pungency of white pepper and chockfull of tofu shreds, bamboo shoots, tree ears, dried chile flakes and bits of egg. This soup is becoming quite common in many Chinese restaurants, and there are some excellent versions served locally.

Despite being designated with 3 chiles (on a 1-5 chile scale), Pickled Pepper Chicken was muted in flavor and not spicy enough. Young bamboo shoots, julienned carrots, sliced napa cabbage, tree ears, preserved vegetables, pickled red chile peppers and tender strips of chicken breast were almost upended by lots of sliced celery, which always seems to me a cheap substitute for better vegetables, a way to add inexpensive crunch. Still, the entrée was not bad, just somewhat spiritless for a Szechuan dish. 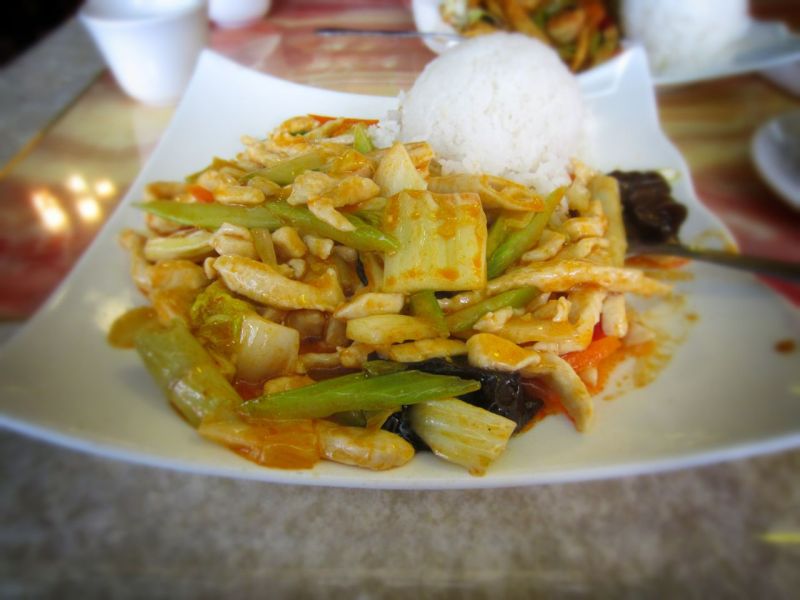 My wife’s Hot Black Bean Shrimp had a different problem. Fermented black beans should be a noticeable presence, let alone flavor, in an entrée named with it (the great Black Bean Chicken at Yea’s Wok comes to mind). Though a few beans could be seen in the mixture, their flavor was barely detectable in the sauce. Still, the dish was tasty enough with other flavors, though milder than my wife would’ve liked. Like my lunch, it too had bamboo shoots, carrots and celery, but used green cabbage instead of napa in a savory garlic sauce, with a few whole dried red chile peppers to add a touch of heat. Again, not a bad dish, just not a memorable one. 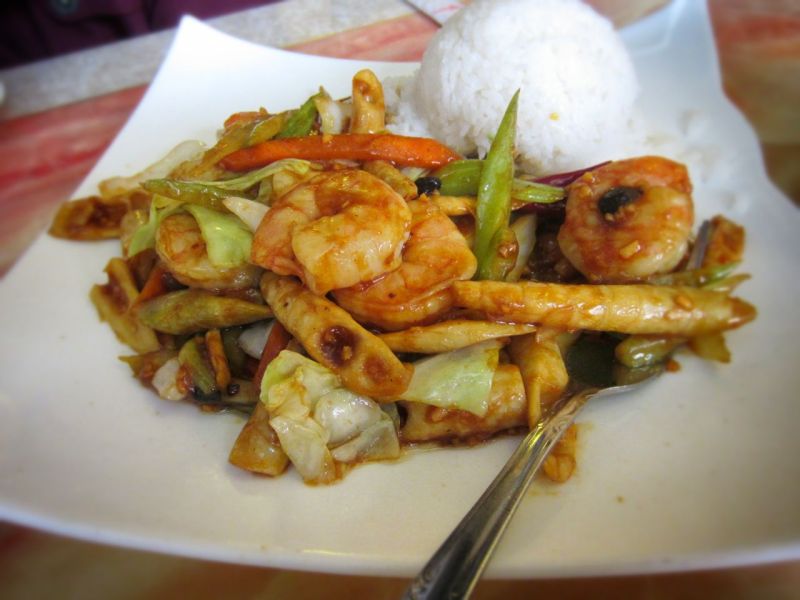 In summary, these two dishes failed to generate much excitement. Even without ordering the two outstanding courses that I loved from the original Szechuan Chef, a restaurant trying to carry on with the same name should stand on its own with dishes that call you back rather than reminisce about what you miss from the old place. I likely won’t be going back.