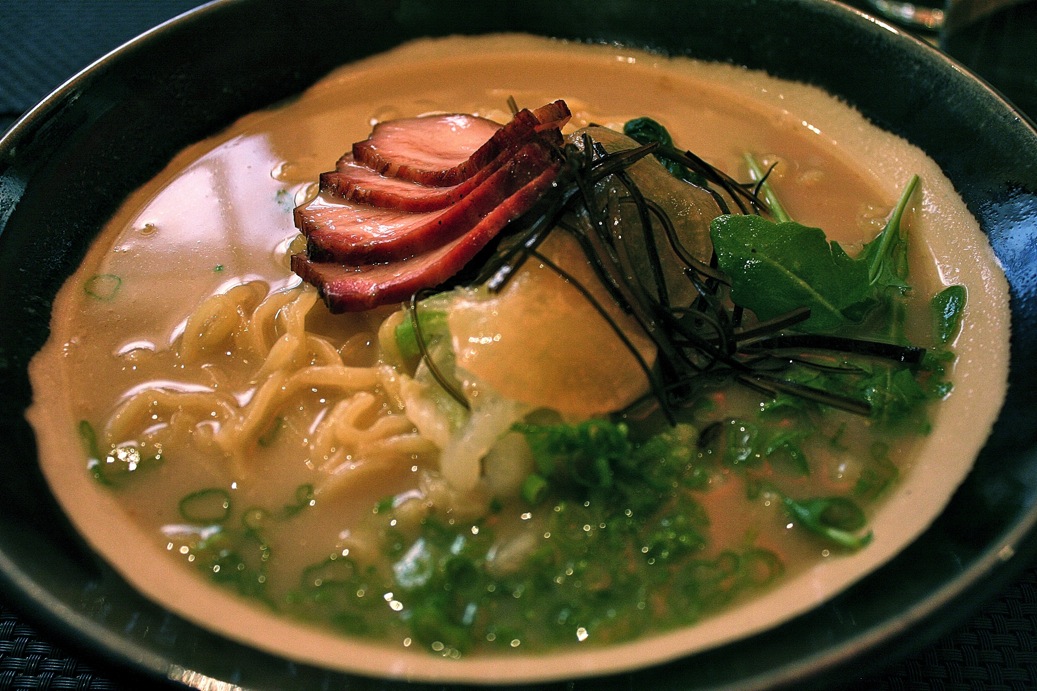 Tonight, we were in the mood for Asian food, so I came across a Yelp review of Shibumi Ramenya in Santa Fe. There wasn’t anything revealing about the reviews, but we went anyway. As soon as we walked in, the interior exuded a minimalism that is classic Japanese. Although the name ramenya means a ramen restaurant, Shibumi also serves izakaya and has an impressive sake menu.

According to our waiter, the chef (Eric Stapleman) trained in kaiseki with Seiji Yamamoto and that he attempts to make genuine ramen. The chef, it turns out, owns an Italian restaurant next door (Trattoria Nostrani), but claims Japanese food is his first passion.

Both my wife and I ordered the tonkotsu ramen. It was very good (☆☆☆½), the tonkotsu broth gelatinous and milky as you would expect, though not as porky as some versions. The broth is cooked over two days, following a prescribed sequence of adding pork parts at strategic moments. There were thin coins of daikon, steamed spinach that had been previously squeezed dry, green onions and sliced fatty smoked pork that practically dissolved in the mouth, and the noodles were cooked just right. There was no option to add an egg. This was a welcome meal after a steady diet of Southwest food, not to mention a complete surprise in the middle of New Mexico.

On a special menu, there was a “special pork ramen” for $30!!! We had to ask the waiter what made it so special and so expensive. It turned out that it is the chef’s effort to reproduce the cult ramen in Tokyo (Fujimaki Gekijyo). Astonishingly, there is only one way you can eat this special ramen (which costs 100,000 yen, or about $115). Chef Shoichi Fujimaki has to invite you. Fujimaki claims there are 26 ingredients, and Stapleman, after watching videos countless times of the master making the special ramen, feels he’s nailed 23 of the 26 ingredients. We will never buy ramen for $30, but we have to admire the chef for his dedication to the craft.

Update: (11-27-13) I have learned that Stapleman has moved to my neck of the woods, Seattle, Washington, to try out his ramenya-izakaya concept there. This is good for Seattle for it will up the ante on who makes the best ramen in the Evergreen City.