Korean-Chinese restaurants have their origins in the 19th century when Chinese immigrants immigrated to Inchon. The evolution of the food makes it a distinct cuisine within Korean cooking. The highly popular chajangmyun (or jjajangmyun) is among its creations, made from roasted black soy bean paste, caramel and meat and/or seafood (except fish), typically topped with shredded cucumber. It has become so popular that mainstream Korean restaurants often have it on their menu. Typically served at Korean-Chinese restaurants are sides of kimchi and sliced raw onions. Takuan (pickled radish) is also served as a side dish in Hawaii.

On our way back to our hotel from Manoa Falls, we had an early dinner at one of these restaurants, On Dong. Their chajangmyun arrived with the sauce and noodles served separately. Never having had it before, based on appearance alone, I was half expecting the sauce to be something similar to Chinese fermented black beans. I also expected it to be bold in flavor. But it was neither. Instead it had a certain blandness belying its intensely black color, a mashed bean texture with silkiness from potato starch, though savory from the addition of some sort of meat I couldn’t identify. If On Dong‘s was representative (it’s purported to be the best in Hawaii) and as immensely popular as chajangmyun is to Koreans, I wondered if this would ever become a sought-after noodle dish of mine. Now, jjampong noodles are another matter.

My wife had a very tasty noodle and wonton soup with pork and seafood (shrimp and squid). In both bowls, the pasta had great texture, handmade in the kitchen. 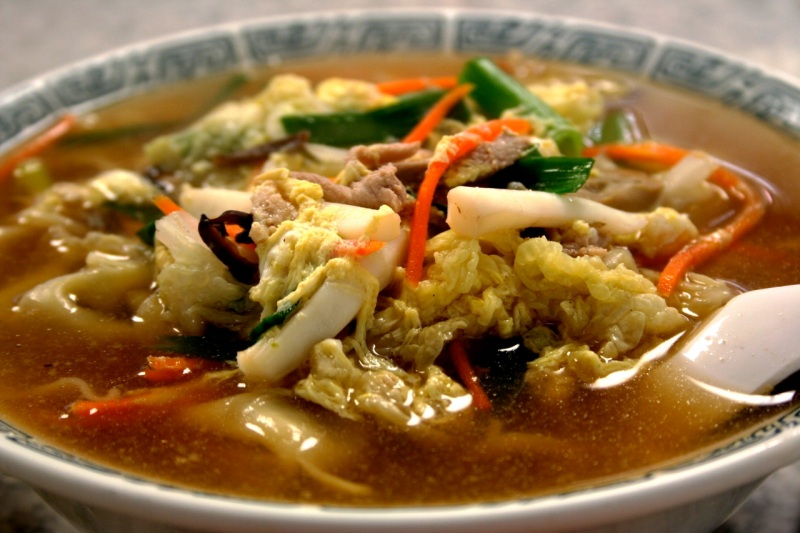 Noodle and wonton soup with seafood and pork