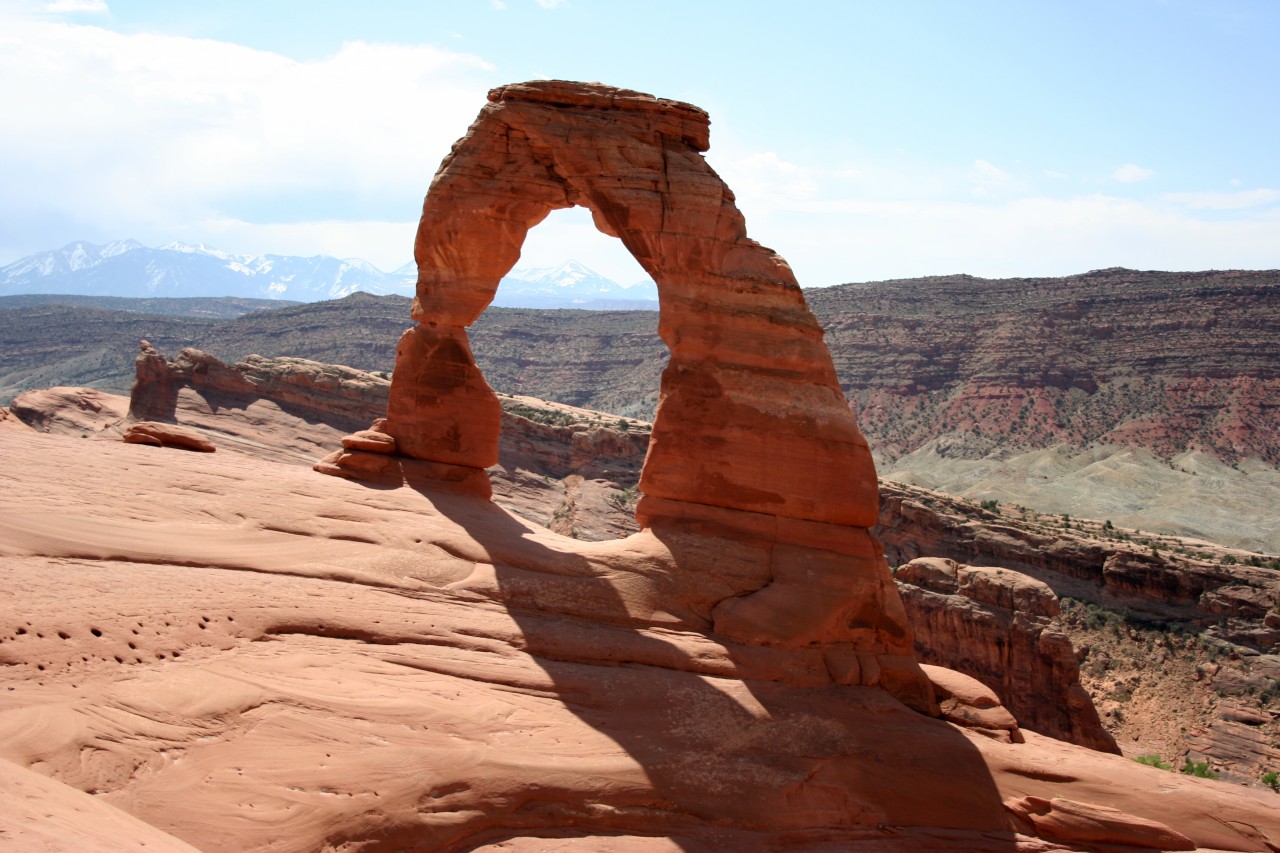 You’d never know this about canyon country (unless of course you’re a geologist) but there is a lot of salt under the surface — a  humongous amount of it, as much as 15,000 feet thick in places. This fact isn’t so unusual when places like the Great Salt Lake and the Bonneville Salt Flats come to mind. It’s just that you don’t see it in southern Utah. Here is a clue that millions of years ago, this area was a vast sea bed.

The interesting thing about salt is this: it acts like a liquid when under tremendous pressure, in this case provided by the massive weight of the sedimentary rocks above, and like liquid it gets shoved around wherever there is little resistance. Where the crust is thin or weak, the salt will push up to create enormous domes or fracture the overlying rock along faults. Both of these phenomena happened in Arches National Park.

This beautiful park has the highest concentration of natural stone arches in the world with over 2,000 already counted. Only a handful of them are accessible by short trails, including one (Landscape Arch) whose span exceeds three football fields in length.

Our first hike at Arches was alongside a soaring, eroded fin called Park Avenue, named presumably for its resemblance to a row of high-rises. The trail slowly descends over slickrock before it ends up a mile away at Courthouse Towers. The Three Gossips are nearby, as is Sheep Rock for its likeness to, you guessed it, a sheep.

Our first introduction to an arch was Delicate Arch (top photo). It is so iconic that it appears on Utah’s license plates. What is unusual is its free-standing shape, sort of McDonald’s-style. Some have commented that it also looks like cowboy chaps. The climb up to the arch meanders over broad expanses of slickrock. Across the canyon you can see salt domes. A narrow ledge over 100 ft above a dry wash is the final leg of the hike before Delicate Arch comes into view. In front of it, a large sandstone amphitheater carved out like a giant bowl invites hikers to rest and ponder this geological specimen. The arch itself, 52 feet high, sits precariously on the rim of a deep canyon.

The Devils Garden Trail rewards the hiker with eight arches along its 3-mile length, including the expansive and fragile Landscape Arch. This hike, possibly the best in the park, took us the entire afternoon. Portions of it were moderately difficult with a fair amount of climbing.

In 1991, a large section of Landscape Arch collapsed, making it thinner and emphasizing the ephemeral nature of arches. For safety’s sake, you can no longer hike up to it; the loop trail underneath has been closed by the Park Service. Landscape will eventually fall down and the world’s longest rock span will disappear forever.

In fact, one of the arches along this trail (Wall Arch) collapsed recently on August 4 and is now gone. We were fortunate to have seen it. Other arches along the Devils Garden trail include Skyline, Tunnel, Pine Tree, Partition, Navajo, Private and Double O. As part of the trail to Double O Arch, you must walk along the ridge of a fin, a really unique experience. It used to be that a walk like this would’ve been considered a journey into remote areas, but nowadays you’re likely to see, as we did, hikers jabbering on their cell phones.

Here, in the northern section of the park, you can clearly see the amazing concentration of eroded fins, both from the road and on the Devils Garden hike. Though not readily apparent at ground-level, an aerial view shows their startlingly parallel alignment (also see Geology notes below).

Edward Abbey: His experiences at Arches as a park ranger was the basis for Edward Abbey’s iconoclastic, radical views on environmentalism and federal land management policies. Some say that his writings inspired the current eco-terrorism movement. Interestingly though, his books are widely available at the national park bookstores.

Geology notes: Arches National Park showcases Entrada sandstone, a vivid salmon-colored formation. The brittle composition of sandstone contributed to its fracturing in rows parallel to the direction of travel long ago of the vast salt deposits underneath. Normal erosion wore away the sandstone along the fracture lines to further sculpt the fins. Through a combination of weak spots, ice wedging and water erosion, lower sections of fins fell away, leaving voids that signal the onset of arch building.

At about the time the Rockies were being formed, a vast portion of crust got pushed downward in an area known as the Paradox Basin. The seawater that filled the basin eventually got cut off and evaporation left behind the immense salt beds. Geologists think this process took place many times. The results of the upward pressure of salt deposits can be seen from the Salt Valley and the Fiery Furnace overlooks. Bulges in the exposed Morrison, Dakota and Mancos formations in the valley are eroded mounds painted in striped layers of unearthly pale greens and grays. From above, the salt valley looks oddly out-of-place.