Walking through the Piazza della Rotonda in Rome, all we could see of the Pantheon was the portico with classic Corinthian columns that fronted a large, gray circular structure. As we stepped inside the building through the original bronze doors, we were awestruck by the sheer size of the interior, its immense and lofty dome, a marvelous feat of engineering of ancient Rome. The present structure was largely built by Emperor Hadrian, though an inscription atop the portico attributed it to Emperior Agrippa. In actuality, it has been rebuilt or modified many times.

As the name suggests, the Pantheon was probably a temple consecrated to all the Roman gods. Since the 7th century, the Pantheon also served as a Roman Catholic church, as evidenced by the addition of altars, apses, paintings and niches that contain sculptures of Christian personages and tombs. One of the tombs contains the remains of Raphael. Were it not for its conversion to a church after the fall of Rome, the Pantheon would have long ago been vandalized or stripped of its materials for other uses.

What is astonishing about the dome is that it is the largest, un-reinforced concrete dome in the world. How did the Romans accomplish this? To relieve the pressure from sheer weight, as it rises the dome tapers in thickness and employs lighter stones, with a pumice aggregate at the top. Coffering also reduced the weight.

Now, imagine a structure perfectly enclosing a sphere. This is exactly what the builders seemed to have in mind. The dome itself is a hemisphere with a diameter of 150 Roman feet and the height from floor to oculus is also 150 Roman feet. On the astronomically important dates of the solstices and equinoxes, the sun casts its light at noon on different spots in the interior. On the equinoxes, it shines along a north-south axis through the rotunda. Since our visit was but a week from the vernal equinox, we missed the centered illumination of the entryway, which faces north. 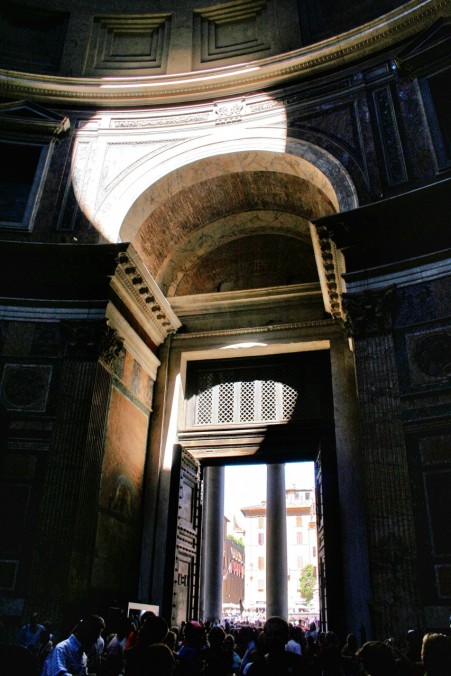 We missed the illumination of the entryway on the vernal equinox by a week.

If the enclosed sphere were intended to be a planetary object, such as the Earth or sun, and when you consider that the sun’s rays penetrate the interior of the Pantheon through the oculus (see the top of the photo below), tracing its own path along an arc as the day progresses and its positioning on the equinoctial dates, then it isn’t hard to wonder if the Pantheon had an astronomical significance, too. 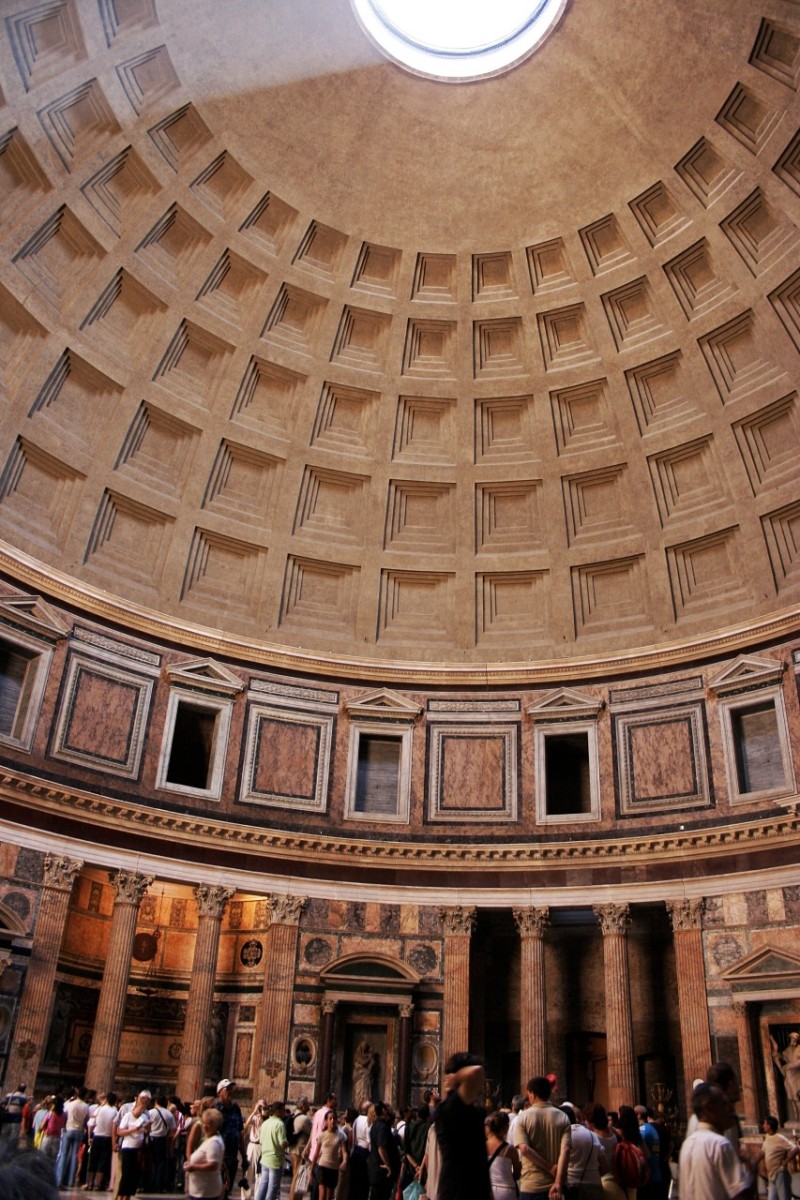 The hemispherical dome is topped by an oculus and flanked by 5 rows of coffers. Raphael’s tomb is in the center at ground level.

Filippo Brunelleschi studied the Pantheon before he designed his dome for the Florence cathedral. The Pantheon is truly one of the world’s remarkable structures.