My wife and I have never driven I-5 through the Northwest in October. This year we did, en route to Southern California. The autumn leaves were gorgeous all along the interstate, mostly yellow with occasional spots of orange and red. They helped break up the monotony of having gone this route many times before.

When I was in Southern California it dawned on me that we’d be passing through Portland later in the month on the way home. I tried to keep a close tab on the fall colors as they were developing in the Japanese Garden.

Trying to find out the current status of the maples wasn’t easy. The website japanesegarden.org didn’t do frequent enough updates to be helpful. So fortune would have to shine on us and it wouldn’t be too late by the time we got to Rose City. As it turned out this year, for best color, the third week was probably best. Yet when we arrived the following week, fortunately there was plenty to admire, in particular the stunning lace leaf maple whose glory I was able to capture on camera. Here is a view from a slightly different angle. 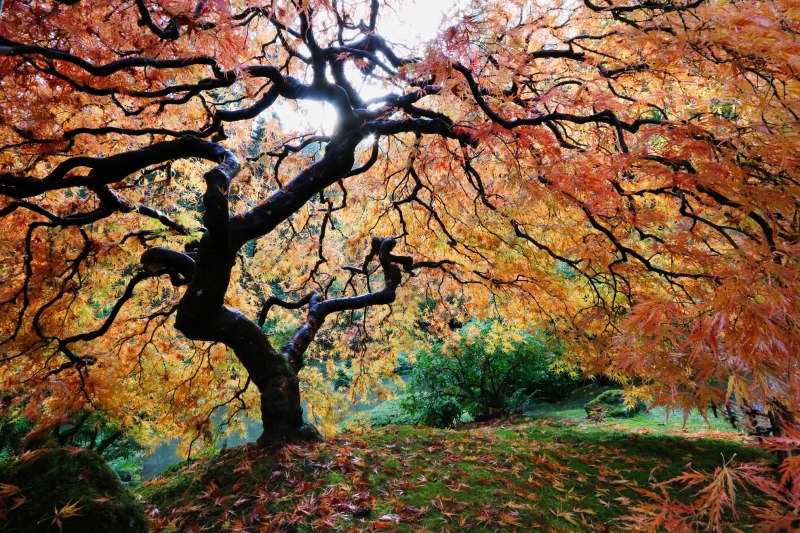 Portland’s Japanese garden is recognized as being the finest outside Japan. I’ve seen it grow and mature over the years, infrequent though my visits have been, and become the breathtaking ambassador it is today. My last time here was in early October 2013, a bit early for best fall color. So it was with great anticipation and fingers crossed that my wife and I arrived on Sunday (October 28). Because it was two hours before closing, we had to keep up a faster pace than we wanted, but we were still rewarded with splendor. The forecasts for thundershowers didn’t materialize; there was only an occasional sprinkle.

After leaving, we headed straight to Ataula, one of our favorite restaurants in Portland. Not wishing to get stuck in Portland’s awful rush hour traffic on Monday morning, we got a room for the night in Vancouver, Washington, just across the Columbia River. 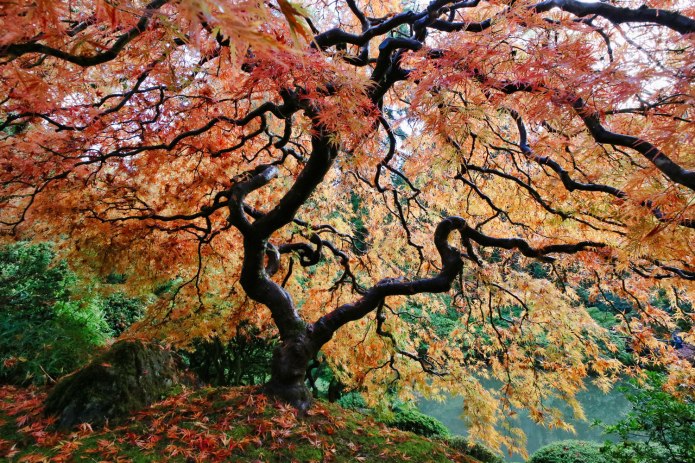 If there is one outstanding beauty in Portland, Oregon, my vote goes to this laceleaf maple that shines the brightest in late fall at the Japanese Garden. I was fortunate to see it in its full glory when I passed through the city last Sunday on my way home to Seattle. Five years ago, I visited too early in October to enjoy the best color.

No, we’re still enjoying Spring. But, the Bellevue Botanical Garden has these nice Japanese maples with reddish foliage: a laceleaf (Acer palmatum ‘Garnet’, above) and tree (Acer palmatum ‘Burgundy Lace’, below). 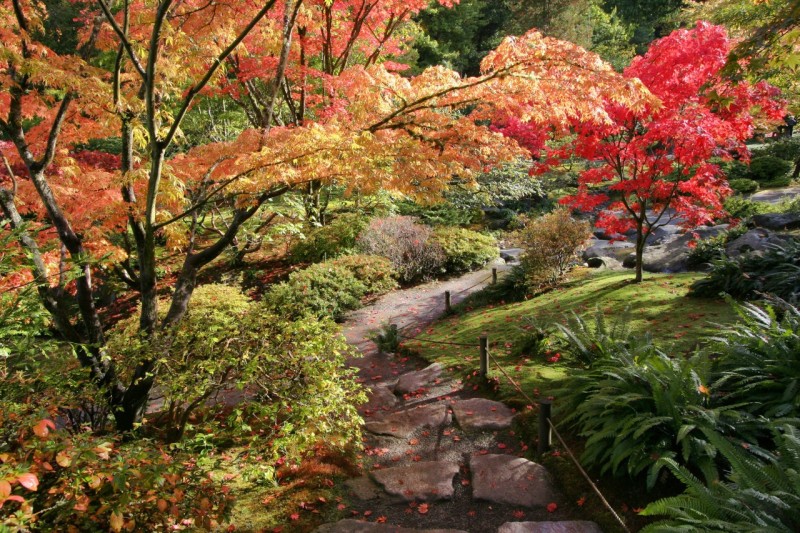 The Seattle Japanese Garden, nestled in the Washington Park Arboretum near the University of Washington, is beautiful at any time of year, but never more so than in the autumn, when brilliant fall colors run riot among the Japanese maples. In the past, we never managed to visit the garden at the right moment when the trees are at their colorful peak. This year, the Pacific Northwest was blessed with an extended summer of clear skies and warm daytime temperatures that lasted into the middle of October, coupled with cold evenings, those together the recipe for a potentially brilliant display. It did not disappoint. We had no intention today of visiting as the forecast was for showers and thundershowers throughout the day. But when we noticed after breakfast that there were sun breaks through the cloud cover and no precipitation, we jumped in the car and headed for the garden.

Almost immediately past the entrance, there was a beautifully pruned, magnificent laceleaf maple, with brilliant orange foliage. At 15 feet tall, it is a mature shrub, almost regal in its splendor.

The footpaths around the garden are packed down with gravel with some stepping stones over water and a small bridge. The main path makes a loop around a lake stocked with large numbers of koi, which are more visible in warmer months. Most of the maples are found in the northern part of the garden. 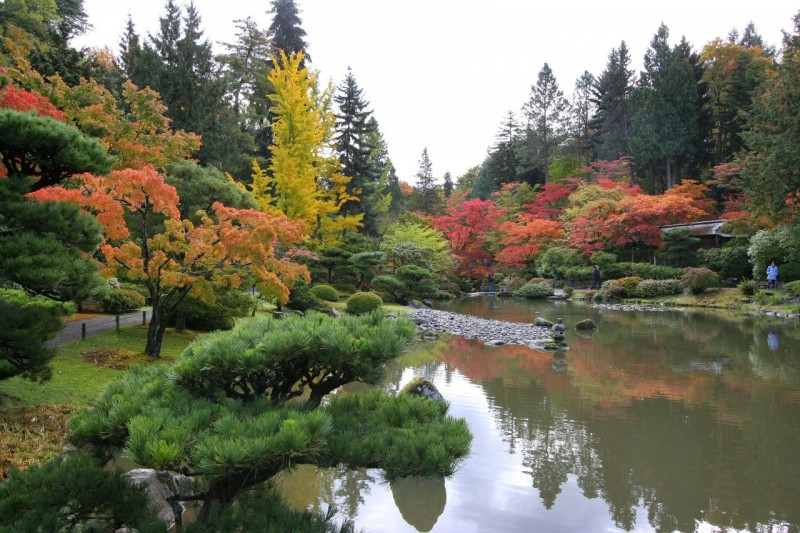 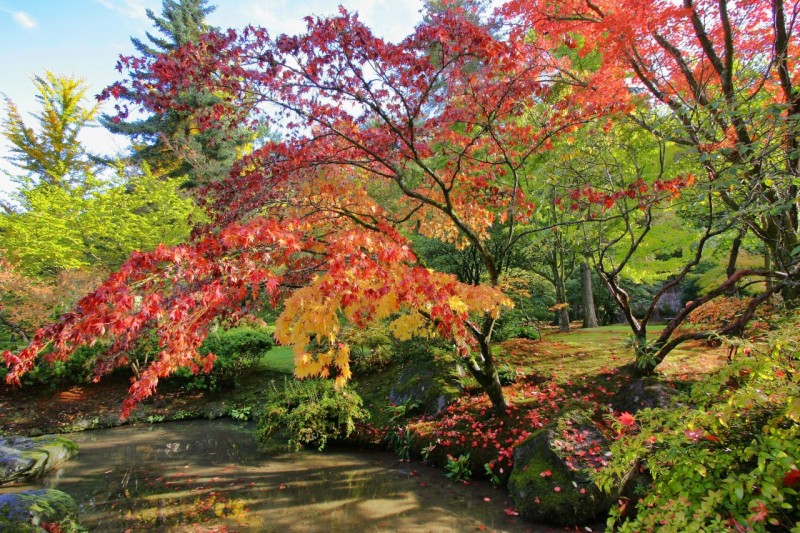 The teahouse is generally not open to the public, though there are tea demonstrations (chado) on certain dates of the year. When surrounded by fall colors, the teahouse and surrounding garden take on a most serene atmosphere (top image).

Throughout the garden, we admired the temporal beauty provided by fallen leaves on moss-covered ground. 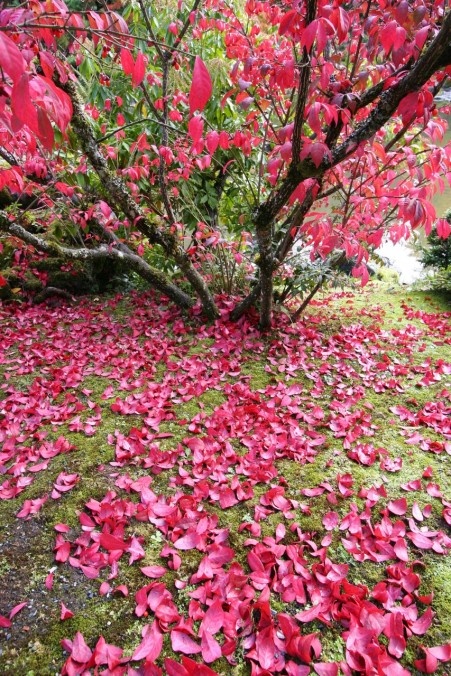 The weather, though cold and crisp, stayed dry and mostly sunny during our short visit before the crowds began appearing in earnest.