We had hoped to time our arrival to Brookings when the Easter lily fields would be in bloom. At least, that was what we were expecting after reading about the farms. Left to their own devices, they would naturally bloom in July. You’re probably wondering like I did, isn’t Easter-time their time to flower? It turns out that there is a labor-intensive science to forcing them to produce on Easter, which occurs annually on different dates. The bottom line is that we (or anyone else) wouldn’t ever see fields covered in white. Brookings and Harbor (across the Chetco River) grow 90 percent of the Easter lily crop in the U.S., the result of perfect conditions for bulb growing. We drove along Oceanside Drive where the farms are located. Eventually, we noticed the characteristic silver green foliage planted in neat rows. On closer look, there were the multiple leaves growing from each stalk. 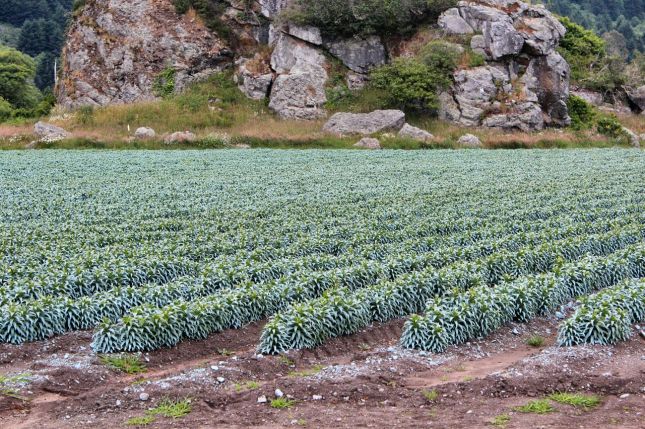 Easter lily farm in Harbor, OR

Redwood trees were already in abundance here in southwestern Oregon. It was a short drive to the California state line.

Our next hope was that we would see the California Rose Bay Rhododendrons in Del Norte Coast Redwoods State Park that were flowering relatively abundantly when we drove through here on June 10, 2009. There was nothing. Instead, the roadside was flush with lilies of a different kind—tiger lilies.

Damnation Creek Trail is the best in Del Norte, one that leads all the way to the Pacific Ocean if you want to negotiate the final very steep, strenuous, exposed root portion to the coast (we didn’t). Short of that, the trail still goes past old growth forest, some of them showing evidence of severe burn from lightning strikes. On the trail, we came across members of a photography workshop led by Issaquah photographer Darrell Gulin. It always seems a coincidence that people you sometimes meet along the way are from your own neck of the woods. 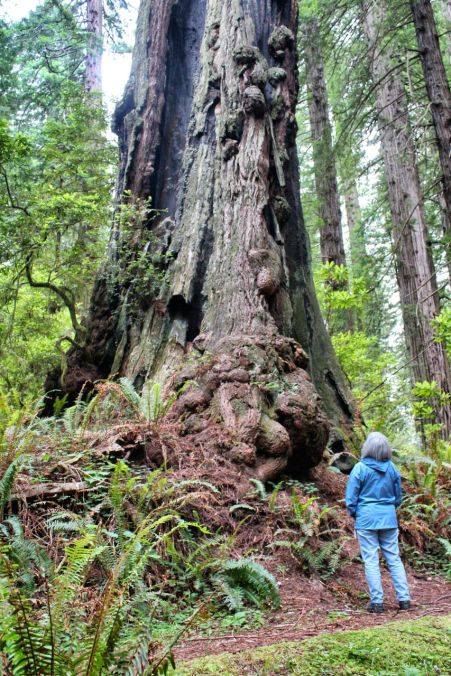 For lunch, we stopped in Arcata at Hole in the Wall (590 G St, 707.822.7407), a sandwich shop in a little shack on a parking lot that is very popular among the locals. There was no seating inside, but there were a few tables and bench chairs outside. We enjoyed a muffaletta (☆☆☆), the special of the day, filled with Genoa and Italian salames, prosciutto, Provolone and Mozzarella cheeses, olive spread and roasted red bell pepper, simply dressed with oil and red vinegar, salt and pepper. All of HITW’s sandwiches are enormous, so splitting one was essential, all washed down with an intriguing tangerine wheet beer (☆☆☆), made by Lost Coast Brewery in nearby Eureka. 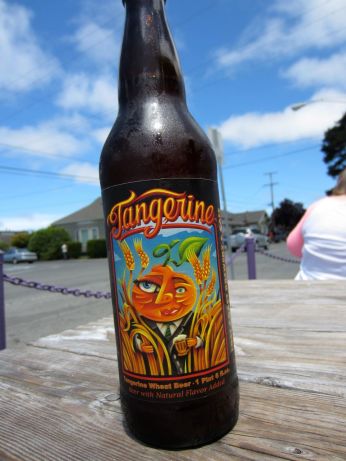 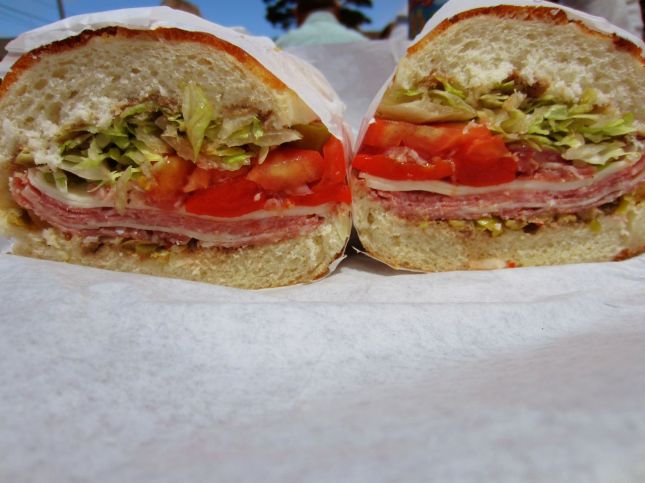 After this morning’s inland drive through California, we headed back to the coast on a winding, tortuous road, starting where California Highway 1 begins in the north at Leggett on US 101. A mere twenty miles took over an hour, despite what my GPS estimated (it assumed an incredulous 55mph on this stretch!). Memo to self: avoid this road next time. The change in scenery was dramatic from the thickly forested redwood empire to the beautiful coastal waters of northern California, with its own sea stacks to rival Oregon’s and treed with cypress and eucalyptus. 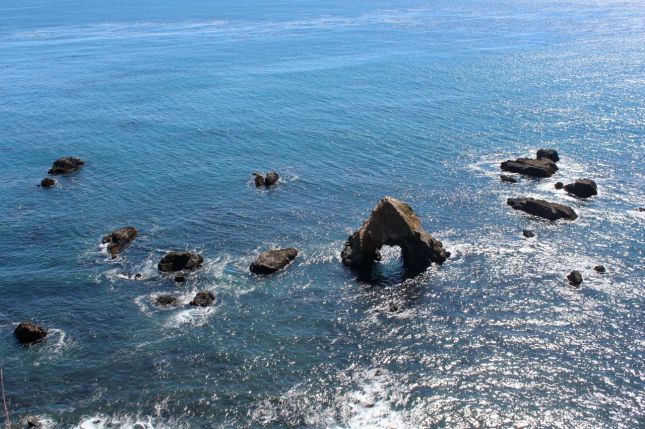 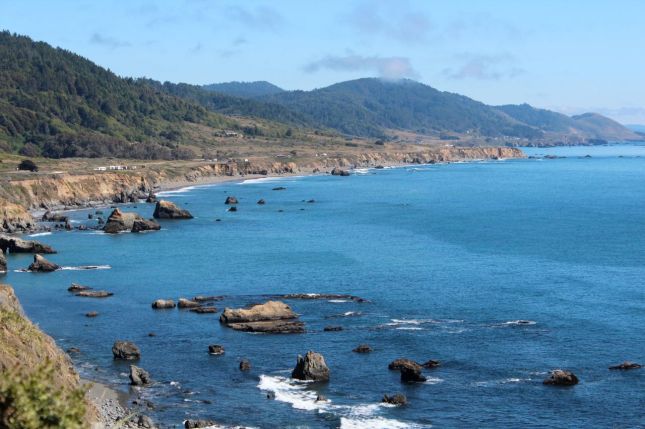 We arrived at our destination, Mendocino, in the late afternoon. 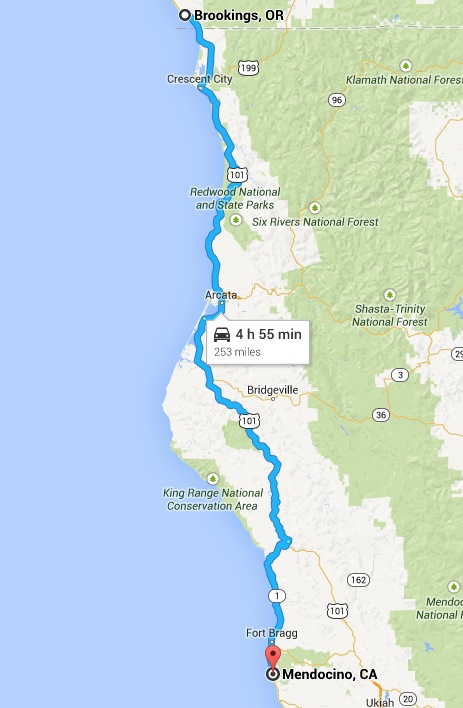 It took one bite of the burrito to realize that the red snapper was faultlessly fresh. My memory doesn’t serve me if I’d ever eaten a fish burrito before. I don’t normally choose anything with a cream sauce, but the dish was listed as one of the specialties at Pancho’s Restaurante. Fortunately, the cream was added with restraint. The entire filling was combined with salsa Lolita (presumably the restaurant’s own creation) and the burrito topped with a mild chile verde sauce. The simply named Fish Burrito (☆☆☆½) was another excellent entrée served in a Mexican restaurant that we’ve serendipitously come across on our road trips (the other being molcajete at the now-shuttered La Hacienda in Orick, CA). The menu specialties reflect the cooking of Puerto Vallarta where the owners come from.

The salsa that came complimentary with the tortilla chips was also remarkable. I even asked the waiter how they make it, but instead of quipping that if he told me, he’d have to … anyway, he simply said I’d have to sign a waiver not to tell, then gave me a devilish grin. He wasn’t about to reveal anything. It turns out that the salsa is available for sale at the restaurant and in local stores.

We were directed to Pancho’s by the front desk at the motel where we were staying, proving once again that one of the best ways to discover good local restaurants is to ask a local. 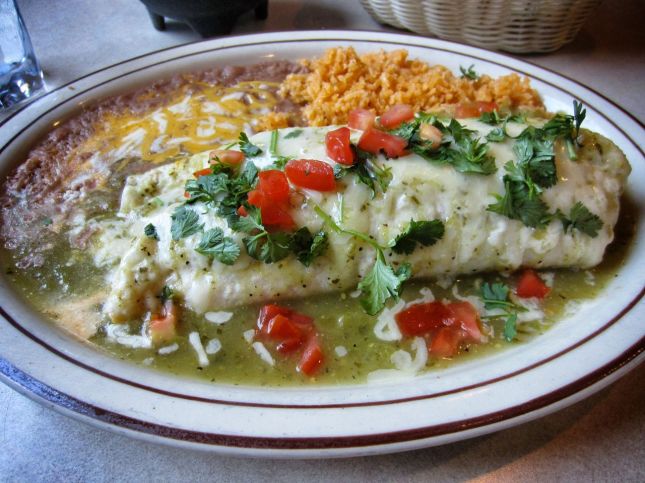