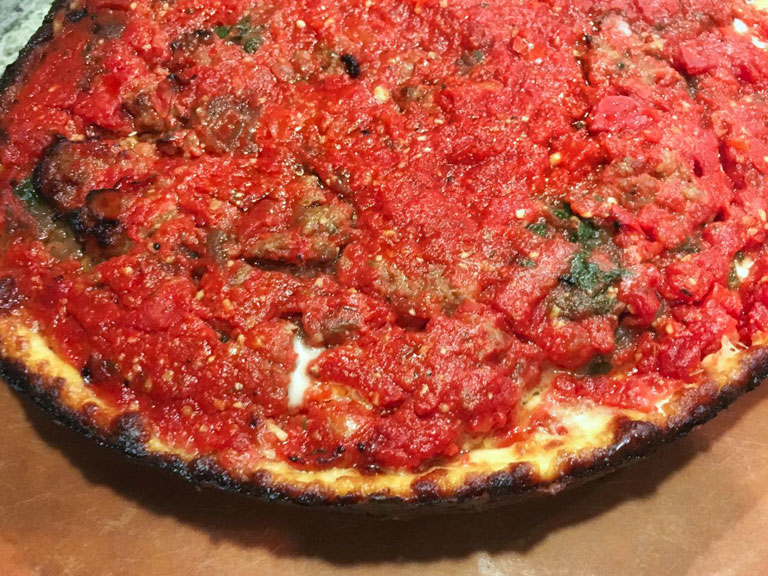 At one time, the answer would’ve been an emphatic ‘no,’ not because I tried it (I hadn’t) but any pizza thicker than a half inch and crust not made with “00” flour with its low gluten and crackly edges was not my preference for a great pie.

That was before I had a sample of a deep dish pie at Patxi’s in Seattle that someone else ordered. It had no meat, just tomato sauce, spinach, pesto and cheese. Surprisingly the cheese wasn’t on top but underneath a chunky tomato sauce, as is the custom in Chicago. And it was thick and hearty, best eaten with knife and fork. The first bite shattered my prejudice of what makes a good pizza.

Last Friday, my son-in-law got takeout from Windy City Pie, which specializes in Chicago-style deep dish. He walked in the door with a single box roughly a foot square, which if it were ‘traditional’ pizza would barely satisfy the four of us. But the content was something to behold, easily an inch high, a massive pie smothered in thick, bright tomato sauce and edges charred as if left in the oven too long, clearly not what a pizza is supposed to look like.

The crust was more bread-like, closer to dense cornbread in texture with some chew. The bottom was darkened brown by a hot pan and crunchy enough to be challenging to cut with a knife. The edge around the pie and spots on top were blackened. At first you might think this was carelessness on Windy City’s part but it replicates what some pizzerias in Chicago and Detroit made famous, a cheesy, frico-like and heavenly quality. I love a zesty tomato sauce; Windy City didn’t disappoint. House-made sausages were in large, tasty chunks. Best on top on ‘traditional’ pizza where its crispness and paprika flavor can be appreciated, the pepperoni here stayed limp buried in all that sauce, which may explain why sausage is the preferred meat in Chicago. The Omnivore is a pie that’s worth the drive to Phinney Ridge. For next time, I’m eyeing the Classic that ditches the pepperoni, spinach and roasted garlic in favor of roasted red peppers and mushrooms. Vegetarians can rejoice with four specialty pizzas on the menu. Build-your-own is also an option.

Windy City Pie has the best deep dish pizza in the Seattle area. Might it hold its own against competition in Chicago? I wouldn’t bet against it.

As of this writing, it isn’t yet open for dine-in business (TBA). Orders must be made online and picked up (Wednesdays-Sundays, 4-9pm).

Also: The same folks who run Windy City have a sister operation, Breezy Town Pizza, in Seattle’s Beacon Hill neighborhood, located inside Clock-Out Lounge where beers, cocktails and other beverages can be ordered. The menu is not quite the same as WC though the Chicago- and Detroit-style (though not as thick) is on it with the same charred, cheesy rim. The crust is a proprietary sourdough recipe. One bite of the PPC (Pepperoni Paint Job) had me convinced that the pizza gods have blessed Seattle with another winner.