Not to be smart-alecky, but wild fires in the West are now a hot topic.

I haven’t personally seen one, but they’ve affected my life here in the Pacific Northwest, enough to make me worry about the future. A year ago, I was looking forward to spending some time again at Whistler in British Columbia. Fresh air. Unparalleled mountain scenery. Beautiful forests. While the area is famous for its winter sports, there is a different experience altogether after snow melt. I’d only been there once before (in July 2011) when wildflowers were everywhere and miles of hiking trails were open. Surrounded by mountains on all sides, Whistler-Blackcomb is a spectacular part of Cascadia, roughly a two-hour drive north of Vancouver.

It was a bummer therefore that last September, in all our time at Whistler, the skies were shrouded in smoke from wild fires burning in British Columbia. It started out as brown haze on the horizon but visibility got progressively worse each day. It was not unlike fog where objects not more than 100 feet away appeared hazy, except the air had a brownish tint and the temperatures were warm. After the first day, my wife and I couldn’t take hikes to higher elevations because of health warnings. 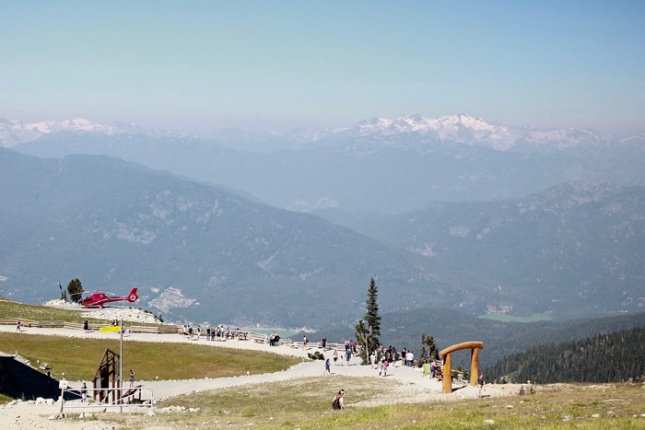 That summer of 2017, wild fires in California were making headlines. Washington and Oregon had their share, including the Eagle Creek fire that devastated the Columbia River Gorge (top image from katu.com). Seattle for the first time I can remember suffered under smoky skies for the better part of August and into September.

In August of this year, when we went to Lake Chelan to visit friends, a pall of unhealthy, stagnant air hung over the glacial lake. Smoke from a local forest fire was to blame.

After I got back home from Chelan, I never saw blue sky for two weeks. Local health advisories were issued to stay indoors if possible, avoid physical activity outside. Two consecutive summers of polluted air might be seen as the beginning of a trend. The consensus is that fires of immense scale and their resulting dirty air are the ‘new normal.’ For many days this summer, Seattle’s air quality was routinely worse than Beijing’s, the AQI as much as five times more severe. Global warming is taking its toll here as elsewhere on the planet. Normally thought of as a wet, verdant corner of the U.S., Washington is becoming hotter and drier. For four consecutive summers that I can recollect, we’ve hardly had a rainy day from May through September, shocking when compared to when I moved here in 1979. Those days recall Mark Twain’s alleged quip, “The pleasantest winter I ever spent was one summer on Puget Sound.” The precipitation in the ’80s was more like endless days of drizzle, now superseded by heavier rains funneled into fewer months. The difference between then and now, a span of nearly thirty years, is dramatic. Snow today is practically a no-show.

On my own property, I’ve noticed telltale changes. Two Western hemlock trees died this year because of prolonged drought over the years. Western red cedar, in my mind the more iconic conifer in the Northwest than Douglas fir, is struggling. Under ideal conditions, they can live over a thousand years. For several years in a row, they’ve shown signs of exhaustion. On every branch, one or more sprays die, not only on my specimens but everywhere I look. With current trends and repeated stress, is it any wonder I think they’ll be lucky to make it another ten years or so?

By late summer, a high fire danger was declared on 95 percent of Washington state. In the past, this was unheard of. So instead of rejoicing in the splendor of our vast, green forests, I now worry that in the not-too-distant future, climate change will turn them into gigantic kindling that will fuel ever larger, more uncontrollable fires and forever change the paradise that I’ve come to love and cherish. Summertime in the Northwest has always been something to looked forward to, but nowadays it fills me with a little dread.

Update (11-19-2018): I’m speechless about the how the title of this post seems to refer to the Paradise fires that are currently burning in California. I hope readers didn’t expect any coverage about this tragic event that underscores the fear implicit in my writing. And if this weren’t accidental enough, only a week before the fire started, my wife and I were in Oroville, only 20 miles south of Paradise. When I was fueling up my car in Chico, which is even closer to Paradise, a young man noticed my Washington State plates, wondered if it was raining there and rued how dry it was in Chico. Now, I feel even worse.