It’s pretty much a sure thing that where there is a line out a restaurant’s door, therein lies good food. The first two times I walked past Eggslut in L.A.’s Grand Central Market (GCM), the queue was astonishingly long. No other food establishment in the Market came close to being as popular. I’m not particularly keen to wait in long lines for food, so I just made a mental note, check this place out.

As a restaurant name, Eggslut is a touch bawdy, provoking curious stares and skeptical ears. It isn’t so unusual anymore when expletives litter social media and words like ass, bitch and bastard now appear in business names. Eggslut didn’t have its beginning in the Market but as a food truck, a genre crossover no longer rare. After the ‘crash’ of 2008, vacancies at GCM went up. When owner Alvin Cailan saw the empty space facing Broadway, he jumped at the chance to set up a brick-and-mortar, recognizing the similarity of the new venture to his food truck operation: serving eager customers while facing the street in a semi-enclosed space. It opened in 2013 and was an immediate hit.

I went back to GCM with my wife and sister-in-law on a weekday morning. We got there at opening (8am) when the Eggslut crowds don’t yet materialize like they do on weekends when 1,000 eggs typically get served.

The Slut is the eponymous menu item. Picture a mason jar filled with puréed potatoes and topped with an egg, which gets coddled when the jar is immersed in hot water. What’s recommended is that you stir the whole thing together, then scoop out with the accompanying buttered baguette toasts. Quite a unique preparation, the whole greater than the sum of its parts. The potatoes are nicely seasoned and buttered. The egg is barely cooked, white and yolk still jiggly, sprinkled with chives and sea salt. If you’re averse to barely cooked eggs, you likely will pass on this. For the rest of us, the Slut is a revelation, an inspired, luscious combination of simple ingredients.

Though the Slut is the signature dish, what might have become more popular since the transformation from food truck to Grand Central Market stand is the morning breakfast sandwich known as the Fairfax, presumably named after the street in L.A. where the truck used to ply its trade. It’s not the usual sausage, cheese and egg in an English muffin but a glorious mess of soft-scrambled eggs, cheddar, caramelized onions and chives billeted in a brioche bun. The sandwich gets zing from sriracha mayo. Optional (and extra cost) is bacon. Unless preference or dietary laws prevent it, add the bacon. The mess factor is high. After the first bite, breakfast starts to fall apart: bits of egg drop, a slurry of mayo and cooked onion liquid pools in the hand and dribbles down the arm, bacon pulls out. I saw suits with ties flipped over their shoulder. The sandwich wrap does its valiant best to stem the tide. Eyes closed, I shifted into an alternate reality that I was sad to leave when breakfast was over. Sublime. 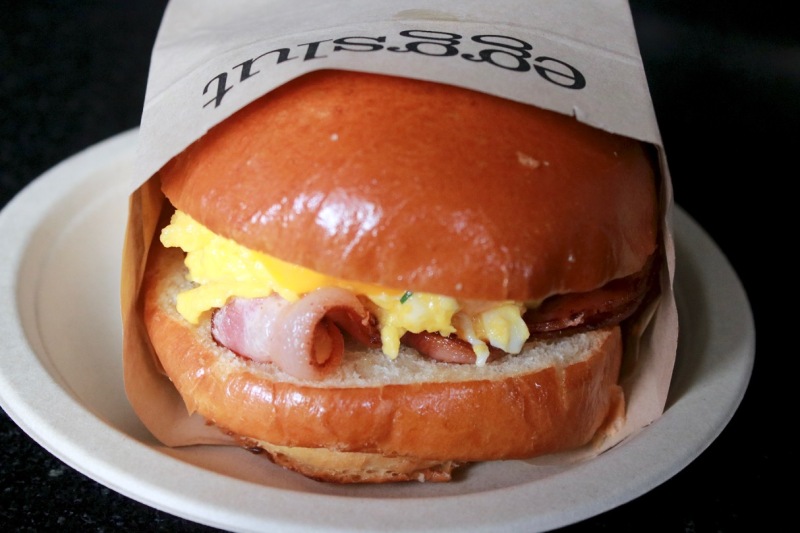 If you insist on more familiar grub, also on the menu are bacon or turkey sausage sandwiches with medium-fried egg and cheddar. There’s also a cheeseburger.

Angelinos no longer have a monopoly on such goodness. If you live in Las Vegas or NYC, there’s an Eggslut near you, too.