Nuestra Señora de La Paz. That’s a mouthful for a place that sounds more like a title. Most of us know it simply as La Paz. At just under 12,000 feet, it’s the highest capital city in the world—in rarefied air. If you saw the movie Our Brand Is Crisis, you would’ve noticed Sandra Bullock’s character taking days to adjust to altitude sickness. My wife and I made the transition gradually from Peru.

We arrived in La Paz after a lengthy bus ride from Puno (Peru) on Bolivia Hop, disrupted by a painfully long layover in Copacabana (4½ hours) and unruly passengers who saw fit to get drunk in Copa and make asses of themselves on the bus. Once we got to the outskirts of metro La Paz late at night, it took an eternity to get to the center of town and our hotel. The reason would become clear the next day as I saw that La Paz sits in the middle of an enormous bowl-like canyon surrounded by the mountains of the altiplano.

The feeling I got was that La Paz is a chaotic city in more ways than one: dense population, extreme traffic congestion, urban planning (or lack thereof). It’s rare to find streets parallel or perpendicular to one another. Viewing it from a high vantage point, like Mirador Killi Killi or El Alto, the houses and buildings look like millions of Lego blocks were spilled over the canyon rim. Undeniable though is the spectacular setting, with 21,000-foot snow-capped Illimani as a backdrop.

Homes are being built precariously on the canyon’s steepest slopes. It surprised me that the wealthiest don’t claim these locations (and views), but the poorest who have no other choice but to live where there’s still room to build. I can’t imagine these homes made of bricks on unstable slopes standing up well against earthquakes that regularly rock the region.

The well-to-do, powerful and famous live in an area called Zona Sur. At an average of 10,500 feet, this area of La Paz remarkably enjoys a warmer climate than city center, which is about 1,500 feet higher. Such is the amazing topography of La Paz. You can be sure that the homes are bigger, and streets wider and tree-lined, in contrast to the crammed ‘inner’ city. Here too is the home of foreign embassies as well as the headquarters of many multinational corporations.

This density, unbearable traffic and La Paz’s geography make it hard to swiftly get into or out of the city. As stated before, the city sits in a huge bowl-like depression. To get to El Alto, one of the fastest growing cities in Bolivia (population 1,000,000) and location of the world’s highest international airport (13,000 ft/4,000 m), you need to take Ruta Nacional 3 that slowly zigzags up the canyon. (The air is so thin at the airport that heavy, wide-bodied jets, like the B-747, are not allowed to operate there.) Just to make your way from one community to another is a major hassle. That’s the reason the Bolivian government has embarked on an ambitious program to link important centers via Mi Teleférico’s cable cars. You guessed it, as high as La Paz is, the three cable car lines that have been built so far are the highest in the world. There are plans to build seven more. On the red line that connects the center of La Paz to El Alto, I got a closer panorama look at the city and its disorderly density. 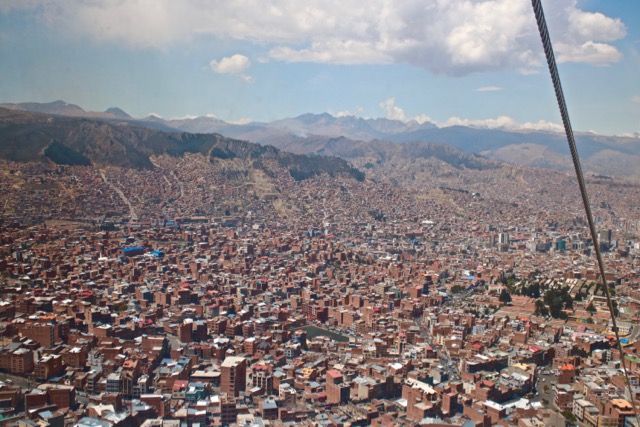 The day I rode the cable car was Thursday, which meant that (along with Sundays) the El Alto flea market would be in full swing, according to our guide. He took us there to have this shopping experience, of being able to buy almost anything—and I mean anything—even used syringes according to another blogger, at what seemed like the world’s largest (definitely highest altitude) flea market. 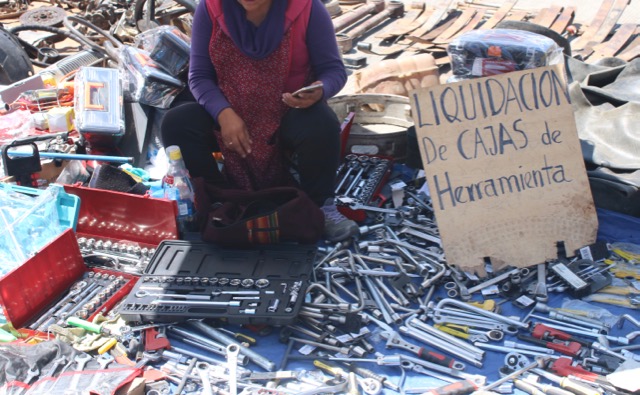 When I took this picture, the vendor was not happy

Our guide led us to the back of the market, along a small street lined with semi-permanent stands, where he wanted us to try some roasted, sweetened peanut juice. Amazingly refreshing is all I can say. 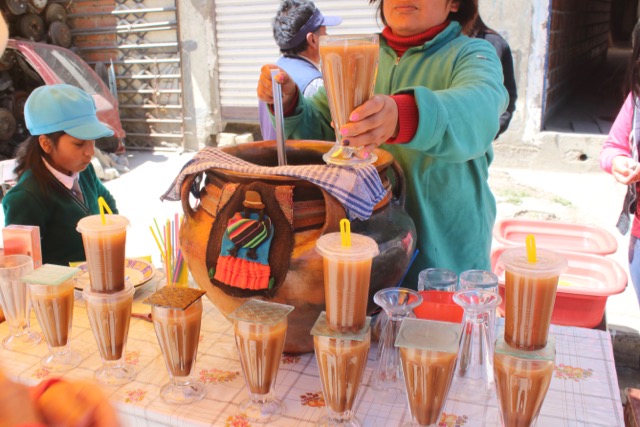 I noticed them all over the city, the Bolivian women in traditional Aymara dress. Up until fairly recently, they were never allowed in the ‘better’ parts of La Paz; it was a no-no for them to be seen with their undersized bowler hat, puffy, voluminous skirt, and embroidered shawl. The Spaniards called her chola, a derogatory term for an indigenous woman (cholo, the male counterpart). It’s now a symbol of new-found cultural pride and economic power. (The U.S. has its own usage as applied to Mexican Americans. Not so coincidentally, the term was first used by the Spanish during their conquest of New World native peoples.) Nowadays, not only is the dress commonly seen in the city, but the getups have taken on a life of their own, ladies known to spend a small fortune, even a king’s ransom, on the latest fashions complete with jewelry.

The women who wear them are affectionately called cholitas. Cholitas paceñas, the cholitas of La Paz. The skirts (polleras) are worn high and consist of many pleated layers to give the women the appearance of a larger-than-life butt, meant to convey fertility and beauty. 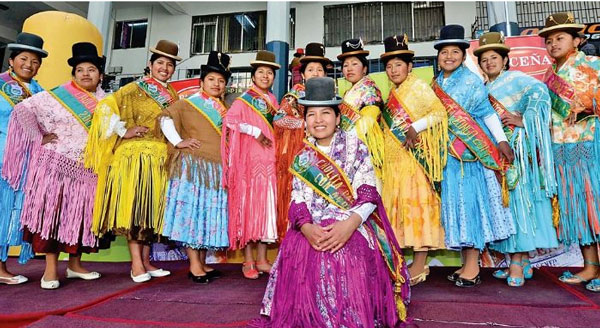 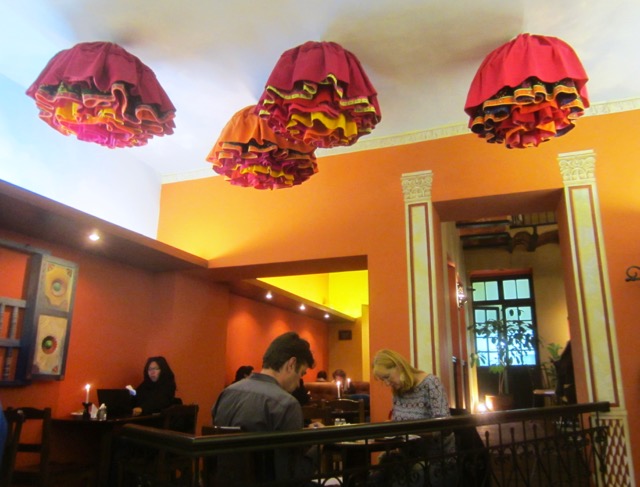 A relatively new phenomenon is very popular in the La Paz area, spawned by the WWF and Mexico’s lucha libre. Luchadoras cholitas. Yep, cholita wrasslin’. My wife and I got to witness this, not in El Alto where it got started, but on stage at Layka Restaurant over chorrellana llama steak and charquekan. This is all done in fun but started out as an acting out against male oppression and female servitude. Think about it, the women in El Alto are the highest-altitude wrestlers in the world. 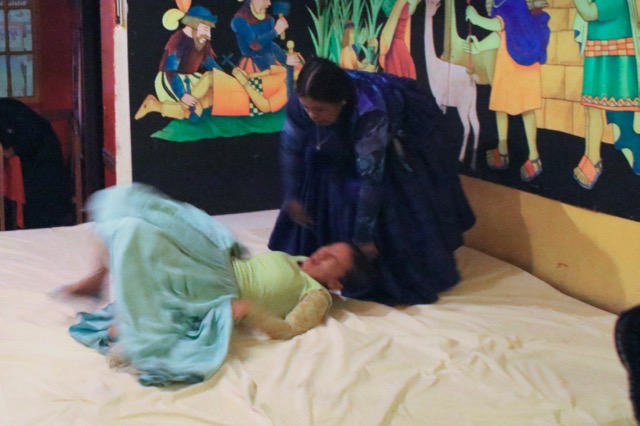 All the indigenous pride and social movements resulted in the election of Evo Morales in 2006, Bolivia’s first indigenous (Aymara) president. He has become the longest serving president in Bolivian history, having won three elections, no mean feat considering that 79 presidents have served over its 223-year democracy (2.8-year average) prior to his taking office. His economic policies are unique among left-leaning countries for bringing about sustained growth even during the downturn of the recent worldwide recession. Saying Morales was responsible, our guide pointed to the Congressional building in Plaza Murillo and challenged my wife and me to spot what was different about it. How about you? 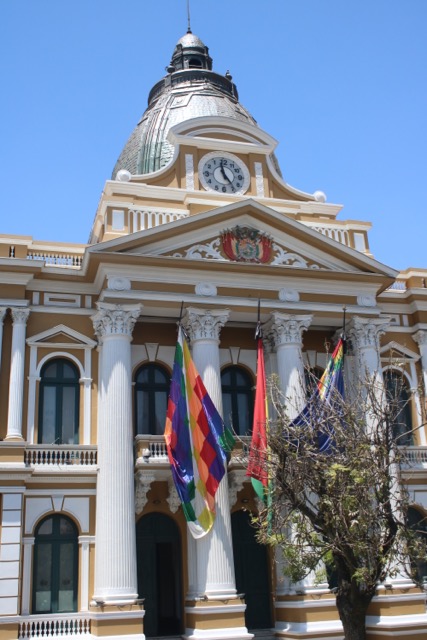 The official reason for reversing the clock face, called the Clock of the South, was that in the southern hemisphere, a sundial casts a shadow that goes counter-clockwise and therefore why not represent the analog clock in this fashion. Hmm, o-o-o-kay. But, the more symbolic reason goes something like this. Bolivia has long been oppressed by colonial powers, powers that reside in the north. In an attempt to reverse the effects of colonialism and imperialism, the clock has been turned back. I sympathize with countries trying to assert their independence from foreign oppression, but this move just seems downright weird. It did take tongue-in-cheek chutzpah though.

It would probably be accurate to say that salteñas are Bolivia’s favorite morning food. My wife heard about them from a friend, who said she must have them. A stuffed pastry like an empanada, it typically has a savory stew-like filling made with meat, usually beef, pork or chicken, though some have only vegetables. It is baked and has a half-circular shape with braiding along the curved edge. After my wife asked our guide about them the day before, he surprised us when he stopped at Beamar, a salteñeria near Hernando Siles Olympic Stadium, to pick one up for each of us. Best piping hot, you eat them with one pointed end up, making sure not to spill any juice. Delicious. 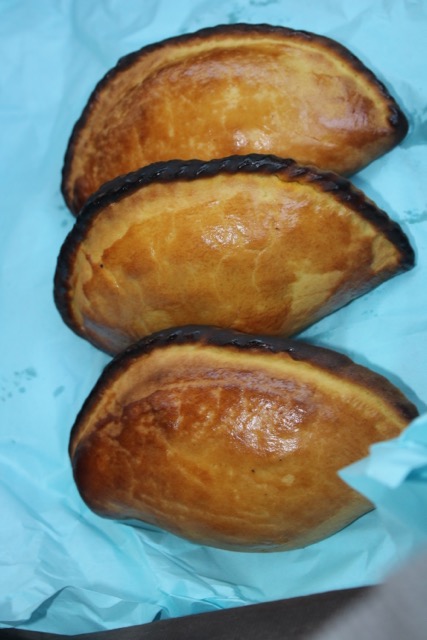 I liked La Paz but in a different way than I liked places in Peru. Sure, there are frustrations about the city—its over-crowdedness, insufferable traffic, its closed-in feeling, the extreme gap between rich and poor and that damn thin air. But it has a rawness, a chaotic mixture of traditional and new, culture and traditions that are worth exploring more. The spirit and gumption of the cholitas, who seem to embody an anti-establishment cheekiness and forging ahead with their new-found identity, are refreshing. My wife and I spent only one and a half days in La Paz, but we felt as if we experienced much more, thanks to our excellent guide.

2 thoughts on “La Paz, the Heights of Charm and Frustration”