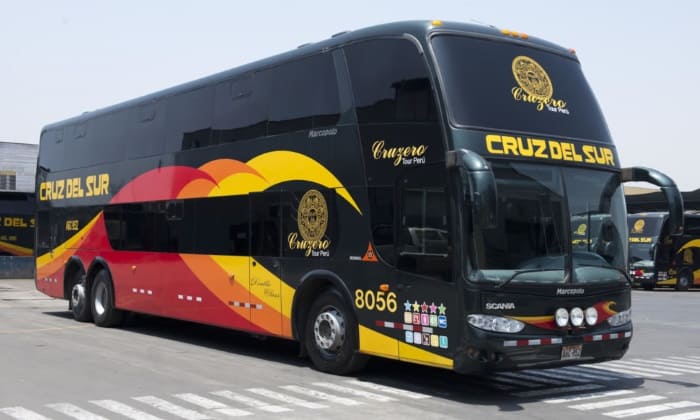 I walked up to the Transportes del Carpio bus counter in Arequipa to pick up pre-paid roundtrip tickets to Aplao, but it wasn’t going to be as simple as that. Not by a long shot. The biggest problem was I didn’t speak Spanish. The second was the clerk didn’t speak English. The bus line, after all, serves locals. The result of the ensuing miscommunication and misunderstanding was that I wound up having to purchase additional tickets for my wife and me to make sure we got to Aplao. In the end, everything got straightened out with the help of our tour company, but this experience and one that followed highlighted a basic fact about bus travel in Peru. There is a big difference among bus companies.

Take the bus to Aplao. By modern standards, it was antiquated—cramped, the pitch and width gave airline economy seats a run for their money, the windows rattled in their frames. The upholstery was worn, curtains dingy. No air-conditioning, no bathroom. If nature calls, you have to wait until the bus arrives at one of its planned stops. And an American adventure movie was played (too loudly) on a single CRT monitor in English with French subtitles. This was supposed to entertain locals?

The next bus my wife and I took was one from Arequipa to Puno, a popular route for tourists. We boarded at the very same Terminal Terrapuerto in Arequipa as above, but the bus line was Cruz del Sur, a company that provides a higher class of service and considered possibly the best bus company in Peru. Though we already had tickets in hand, it was clear from the beginning that the travel experience was going to be much different. The agents all spoke English, they collected our baggage at the counter and there was a special waiting room for customers. There were even restrooms in the waiting room, while ‘outside’ you had to use the public facilities at a cost of 50 céntimos per person.

The bus was much more comfortable than del Carpio’s. The dimensions around and in front of the seats were more generous, it was quieter, there was an onboard toilet. And a meal was served, although it was nothing to write home about. The seats were more modern, comfortable. A blanket. Your own entertainment system.

I’m not out to diss del Carpio, only to make a point. If modern amenities are important, you’ll pay more for the privilege.

4 thoughts on “Night and Day, A Tale of Two Peruvian Bus Companies”