Rooms almost glow from within. Light reflects softly from surfaces as if they’re white-washed, made of ivory-tinted, slightly purplish stone, called sillar. Their whiteness the Spanish invaders admired so much that they made building material out of it. And why not? This rhyolitic rock is plentiful in the Western Andes where volcanic pyroclastic flows deposited countless acres of them long ago. This is a city surrounded by volcanoes, dominated by El Misti, a perfectly shaped cone that towers above the skyline at almost 20,000 feet. Arequipa, La Ciudad Blanca. The beloved city of Mario Vargas Llosa.

I admired sillar’s stark beauty. It is a unique building stone, not only for its light color but its pockmarked texture full of holes left behind millions of years ago by escaping Pleistocene gas bubbles. Its high ash content readily rubbed off on my finger. The thickly applied lime mortar is slightly darker than the stone, making for a pleasing, almost rustic pattern. It seems as if all of Arequipa’s Old Town is built of sillar.

I was struck by a unique architectural feature of buildings made with sillar, the vaulted ceiling. In my hotel room, Zig Zag Restaurant, in many buildings, these high barreled spaces made interior spaces seem to soar. This design may have more to do with structural integrity against earthquakes than aesthetics, but it was striking nevertheless.

Many devastating quakes have struck Arequipa. The Cathedral was destroyed several times, not only by earthquakes but fire and volcanic explosions. It was rebuilt or repaired after each event, the last time in 2001 after an 8.1 temblor struck the western Andes. The basilica is the ultimate monument to sillar. 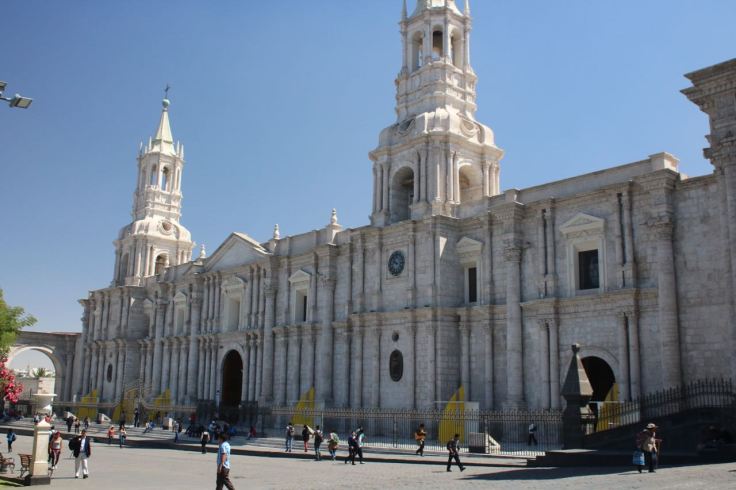 The appellation of White City has another, darker meaning, one repeated to me by a docent at an archaeological museum. To many, the term symbolizes the Spanish racist attitude toward the darker indigenous peoples. Arequipa became the most powerful seat of Spanish power in the region, complete with administration, culture and religious infrastructure, including La Catedral that spans an entire side of the Plaza de Armas. It was also a fervent supporter of the Spanish crown. With consolidation came discrimination.

Sillar continues to be made today. In fact, you can take a tour to one of the quarries outside of town to see how blocks are made with sledge hammer and chisel. Sillar, the foundation of Arequipa, remains mute to the White City’s past, a silent witness and unwitting participant in Spanish conquest. And it’s a most beautiful stone.

2 thoughts on “Arequipa, the White City, the Silent Stones”