Machu Picchu is arguably the world’s most famous ancient archaeological site, a celebrated World Heritage Site that draws millions of visitors annually. My wife and I have had it on our list of destinations for a long time. When we finally made the decision to go to Peru, in part prompted by rumors (since proven to be untrue) that admission to Machu Picchu might be either severely restricted or shut off, it naturally went to the top of our itinerary.

When we arrived, we almost didn’t make it. A farmers’ strike blocked Urubamba and therefore passage to Machu Picchu, including on the evening we were being driven to Ollantaytambo. Carlos, our guide, somehow managed to convince strikers to let us past the blockade, so we were able to get to our hotel.

Ollantaytambo is the starting point for most tourists who don’t plan to hike the Inca Trail. The town has its own attraction, the magnificent Inca citadel that’s built on the mountainside above the city. Rail service is provided to Aguas Calientes, the tourist town where all visitors to Machu Picchu stay overnight. From Aguas Calientes, a 20-minute bus ride takes you up a spectacular, cliff-hanging road to the site’s entrance.

What is it about Machu Picchu that captures everyone’s imagination over other Peruvian archaeological sites, some of which have equally impressive design and architecture? It surely is the iconic image, the picture-postcard scenic view (like the one at the top of this post) that countless people have seen. No other single symbol has come to signify a place than this incredible ruin dramatically perched on a mountainside on the edge of the Amazon rainforest, and Wayna Picchu towering behind it. It’s a sight that seems more fairy tale than the utilitarian purpose for which it was built. Ever since National Geographic published pictures in 1913, Machu Picchu has never been the same.

It’s too bad that we weren’t able to spend more time here. My wife and I spent most of the morning by ourselves walking along the paths around the Hut of the Caretaker and soaking in the view that’s recognized the world over. After we met Carlos, he had to give us the quick tour through the main complex because our train ticket back to Aguas Calientes was in the mid-afternoon. We didn’t have long to appreciate what we were seeing. It’s a sad fact that the sheer crowds and transportation schedules dictate how you spend your time here. In spite of the pace, I was impressed by the colossal achievement of the Incas in building this city, fortress, religious complex, royal estate, summit meeting place, or whatever function Machu Picchu served. Its scale is immense, appreciated all the more of course from the grand view, but likewise in walking its many paths and stairways, past courtyards, buildings, enclosures, terraces, doorways, towers, all integrated with the contours of the land. That so many rocks were moved, dressed and transformed into structures, that so much earth was terraced, everything according to a grand plan, boggles the mind.

It seems every major Inca site has incredibly long stairways. Machu Picchu is no exception. They are literally breathtaking. Anyone not acclimated to high elevations will be gasping for air. More than that, the riser of each step seems high relative to modern standards, making me wonder how the Incas found these stairs to be comfortable to climb at all. Each tread consists of several uneven stones laid side-by-side. Going down the stairs is no easy matter either, though the Incas obviously had no problem. And here I was, slowly and carefully planting my feet in my high-tech Vasque hiking boots with Vibram soles and TPU torsion control chassis.

There is also a reminder that, geologically speaking, things were always not so quiet. A fault runs through Machu Picchu. Sometime in the past, probably before the vast Inca expansion project, a wall constructed of colossal stones had been pulled slightly apart, the first architectural failure of this type of construction I’ve seen and an anomaly among similarly constructed walls here that somehow defied the earthquake’s incredible force. There were also other tell-tale signs. 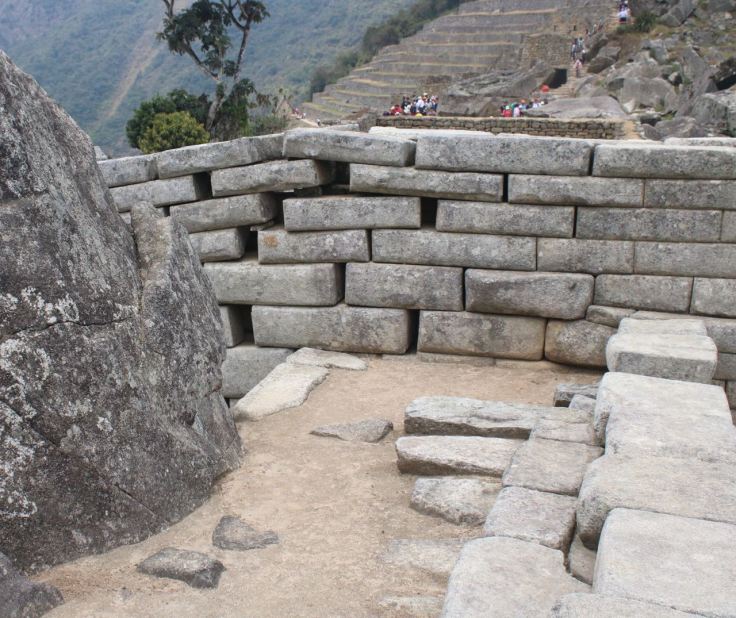 How unfortunate that millions of tourists like me are putting pressure on Machu Picchu. Resources like the internet and Lonely Planet are doing their part in stimulating more interest. Machu Picchu appears on many ‘Top 10’ lists of must-see travel destinations. In order to protect its treasure, the Peruvian government has skirted around the issue of severely restricting permits to enter the site, yet any measure to reduce tourism, Peru’s #3 economic sector, would have a profound effect on the local economy. Cusco Airport is unable to handle increased traffic, much of which Machu undeniably accounts for. As a result, there are plans to build an even larger international airport in nearby Chinchero, with a capacity to handle super-jumbo Airbus A380s. I can’t imagine what impact such an undertaking would have on this small village, famous for its world-class weavers. If the Chinchero plans don’t materialize, Cusco’s throughput capacity could automatically limit the problem.

I’m glad I got here, finally. Even the circus-like atmosphere didn’t blunt my appreciation for what Sapa Inca Pachacutec built (or, more likely, expanded upon) in the 15th century. Machu Picchu lay hidden for centuries until Hiram Bingham brought it to the world’s attention in 1913 with the National Geographic Society. It even lay hidden from the Spanish invaders. Now, it is the world’s destination, for better or worse. The beauty and the mystery of Machu Picchu.