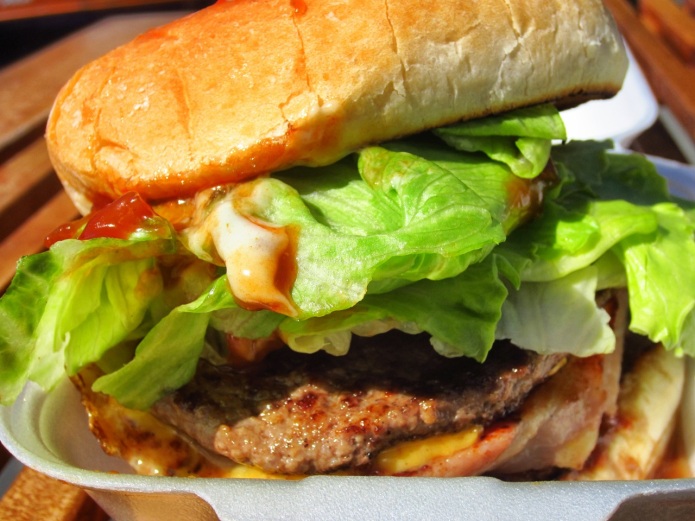 It was a spur of the moment decision. One of those times when your intention suddenly changes as a fleeting thought goes through your mind. I was on my way to Re:START Mall to buy lunch from one of the (shipping) container food businesses until I walked past a food truck stationed just east of the Worcester Blvd bridge over the Avon. I’d gone by Mr Burger several times in the past, not giving it much thought—until today. This time, I looked at the menu posted on the truck’s side for a few minutes, then continued on. But, I stopped not more than 20 feet beyond. It occurred to me that I’ll be leaving New Zealand in a few days, and I hadn’t yet had a burger, Kiwi-style, on this latest visit.

It’s an odd reality that most burgers in New Zealand are sold by fish-and-chips shops. I’m sure there’s an interesting history behind that. Anyway, no doubt because of my expectations in the U.S., I had never even considered the idea of getting a burger where the main offering was fried fish. Even my favorite fish-and-chippery in Christchurch, Coppell Place Seafoods, has one on the menu. 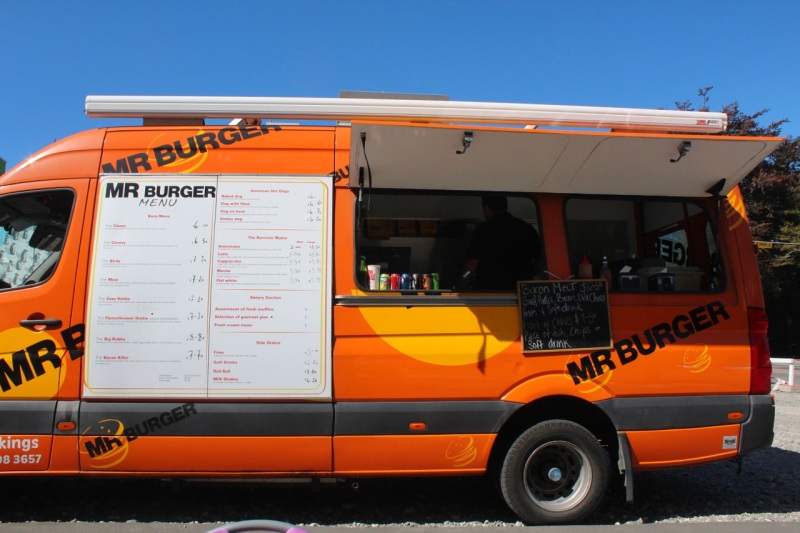 There I was, in front of Mr Burger, a “real” burger enterprise (albeit a mobile one), considering my options. I studied the menu to look for a quintessentially Kiwi sandwich with fried egg and beet slice (called beetroot here). The Big Robby came closest, also including onion, cheese, lettuce, tomato, bacon and double patties but no beetroot. Predictably, I got a monstrous sandwich, fully 4” high, a blow to sensible portion sizes. That’s not all. A stiff wind from the east made it hard to have a pleasant al fresco experience. Sea gulls were gathering around me, including one that alighted on my table, waiting for handouts. Cheeky, as Kiwis would say.

The first bite was comical, the fillings pooching out at the other end, sauce running down my fingers and hands, lettuce and tomato hanging out of my mouth. Every bite was no less messy. I must’ve gone through a half dozen napkins. The patties were tender and high-quality New Zealand grass-fed beef. Kiwis like their bacon flabby instead of crispy as most Americans would prefer. A better bun I would be hard pressed to recall, soft and with enough gluten to resist falling apart. Rather than a Thousand Island-like sauce, a sweetish barbecue sauce lent an interesting smokiness. In summary, the Big Robby was a fine burger sandwich (☆☆☆), messy to the end, over-the-top maybe but culturally fitting. I couldn’t finish a quarter of it. Maybe I should’ve fed it to the gull.