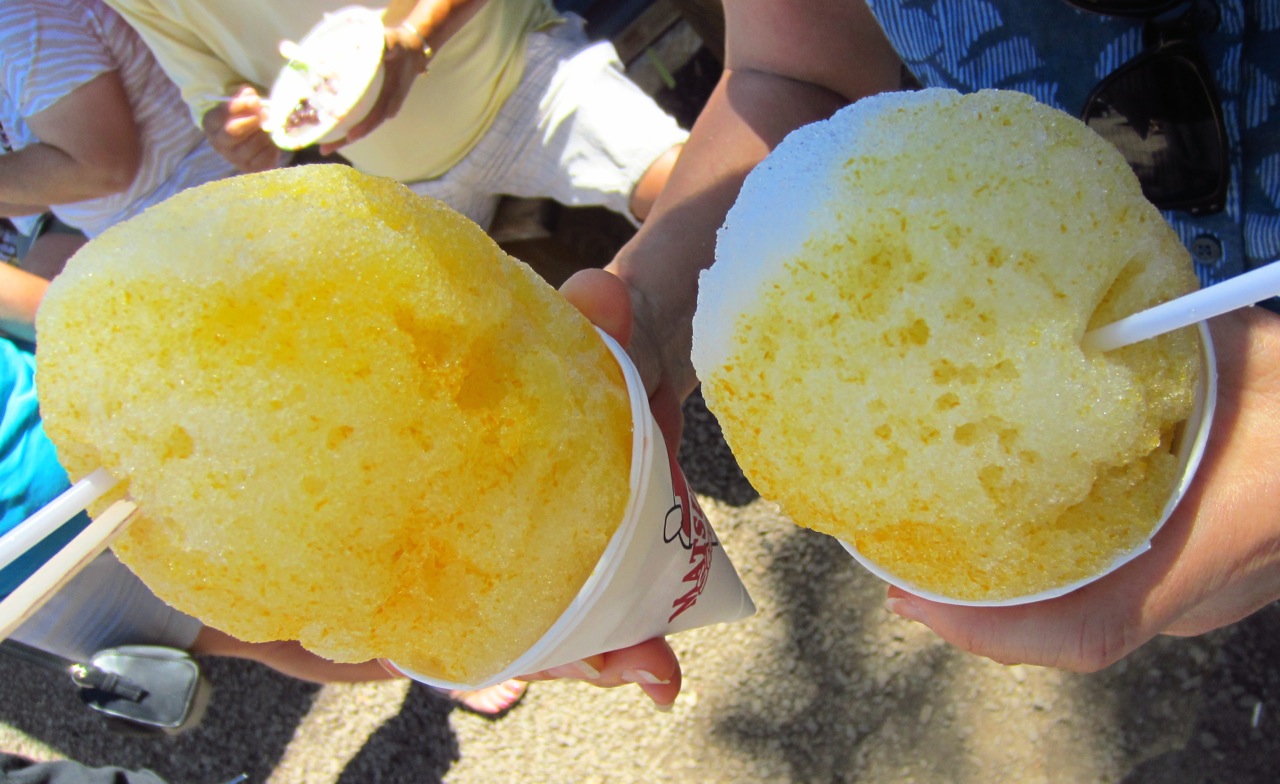 A group of us drove to the North Shore to enjoy its special pleasures: gazing at the beautiful beaches and pounding surf, and making our way through the trifecta of required eating—a shrimp truck, Ted’s Bakery and Matsumoto’s.

A stop at Fumi’s Kahuku Shrimp is always an event to look forward to. We always love it there, this trip being no exception. It would be practically a capital offense not to stop at Ted’s and have the chocolate-haupia pie. We were not guilty of any crime this time through either.

One of Oahu’s biggest attractions is Matsumoto’s, the shave ice store in Hale’iwa. It has long been a destination ever since shave ice became the rage when surfing in the area became big time. Its popularity has spread beyond local shores, for legions of Japanese tourists arrive in phalanxes of buses, lining up out the door cheek by jowl with locals and other tourists (including our party), to satisfy their lust for shave ice. It is said that Matsumoto’s turns out over 1,000 cones daily. With a crew of only 3 or 4 people working behind the counter, one wonders how it’s possible to turn out consistent product. The fact that they’ve been doing it for years now is quite remarkable.

But, on this day, my wife and I noticed a difference in quality from what we remembered from two previous visits. The first thing is that the shave ice granules seemed to be coarser, a sacrilege in Hawaii which prides itself on serving almost fluffy snow. The other failing was the short-shrifting of syrups. Or they lacked their customary intense fruitiness. The shave ice was mostly ice on top, with the syrup pooling at the bottom of the cones, mine overflowing several times and tasting watered down. A finer grind of ice would have done a better job of suspending the syrup evenly. Is Matsumoto’s cutting corners to satisfy the onslaught of customers? Let’s hope not. I’m almost loath to go back.