Nature abhors a vacuum. Aristotle wasn’t referring to my gazebo, but his declaration could easily apply to the springtime urge of robins to build a nest on the post tops otherwise not being used. Last year, I waged a holy war against a robin or two, not opposing their nursery so much as its consequence: bird poop getting dropped on our rattan chairs that the gazebo shelters from Northwest rains.

Robins are nothing if not persistent. After everything that happened last year as posted in the Man vs. Beast, the robin came back. Rather than fighting a losing battle, I adapted by laying a plastic tarp over the furniture. Afterward the robin strangely disappeared. Was blue plastic not the robin’s idea of tasteful home decoration? I left it in place for several more days, just in case. When I thought last season’s window for home-building was past, I removed it.

You can imagine what happened next. With eyesore removed, the robin returned. She eventually laid two beautiful blue eggs. Sadly, several days later, I found them splattered on the gazebo floor, along with nest, the victims of some mishap. (Readers would be wrong to point fingers at yours truly.)

This year, I was determined to get ahead of the game. Three weeks ago, I taped sheets of aluminum foil over the post tops thinking it would accomplish one of two things: (1) the shiny cover would be a distraction, if not a deterrent; and (2) failing that, the smooth surface wouldn’t provide much friction for the nest material. The first assumption didn’t work because the birds, without batting a feathery eyelash, started to haul in building material anyway. The foil must have been just as much a beacon to love-starved robins as a neon motel vacancy sign is to two humans in heat.

Earlier in the year, I started looking around for post caps that could change a post top’s contour. But, they were either too tall or costly. After the failure of the foil “remedy,” I went to the local home improvement store and eventually came across inexpensive melamine bowls that could be taped on to make an awkward and slippery surface. Wouldn’t you know that they happened to be the same color as robin eggs? As he was brushing off a proto-nest, Mr. Fixit got a face full of feathers when a robin swooped down on him, nearly making him fall off the ladder. 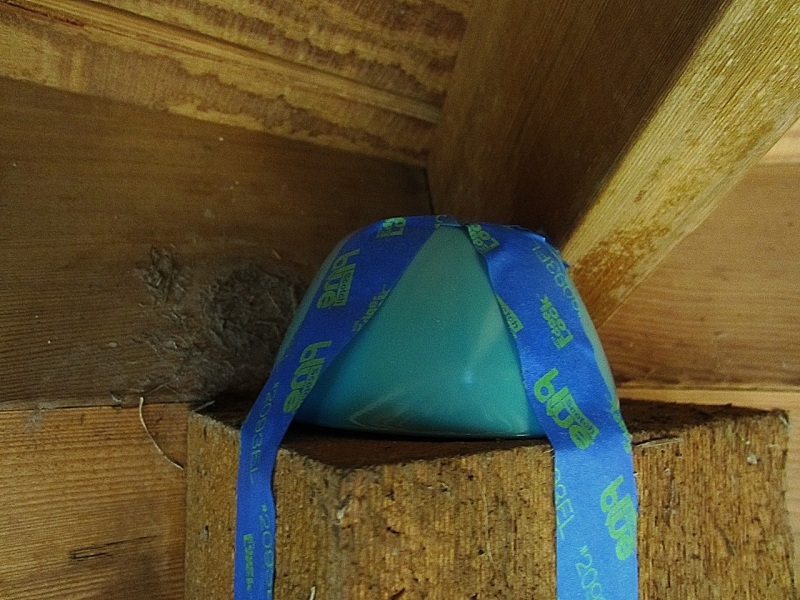 It’s been over a week now since I did this, and it appears to be doing the trick. Maybe I should make wide bevel cuts at the top for next time.