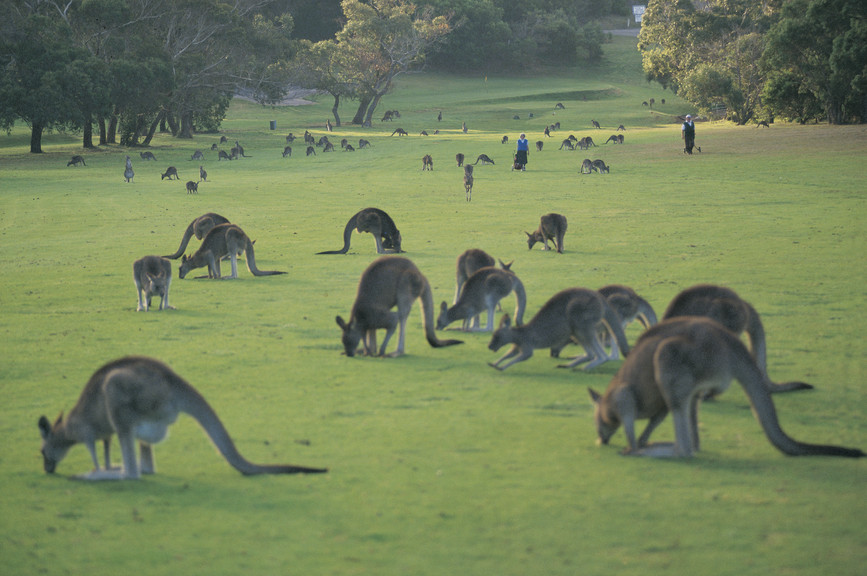 I expected to see lots of them when we set foot on Australian soil. Kangaroos, kangaroos and more kangaroos. Maybe not in Melbourne, but surely along the Great Ocean Road and other parts of undeveloped Victoria. “Kangaroo crossing” signs along the roadways didn’t lessen the expectation. Yet, we never saw a single one.

I should have realized that the no-show isn’t really all that unusual. After all, I can count on less than one finger the number of times I’ve seen Bigfoot here in the Pacific Northwest. Humans have a way of scaring off wildlife. If we don’t spook them, we take away their habitats. Roos are not likely to be waving at us as we roar by in our automobiles and trucks, in my mind the single worst noise polluters in any urban setting, let alone a natural one. And, regarding those signs, the last thing I wanted to happen was striking a kangaroo, risking both its life and mine, never mind forking over a fortune to the car rental agency since I opted out of collision and damage insurance.

Still, if we had wanted to, we could have gone down to the Anglesea golf course to see the grey kangaroos cavorting there, a short drive from Torquay where we were staying. We just couldn’t find the time, it seems.

Koalas, on the other hand, are impossible to find in the wild. Could we catch a glimpse of a wombat, echidna, Tasmanian devil or dingo? Not likely.

So, the next best thing was to see koalas in a controlled habitat (a.k.a., captivity) on a half-day bus tour from Melbourne to Phillip Island. The tour included a stopover at the Koala Conservation Centre. My daughter had her picture taken cuddling a koala at the Sydney Zoo two years ago, so my wife was hoping to do the same here. Aside from the possibility of being peed on or clawed, Victoria does not allow humans to handle koalas. We had to be content with seeing them in the manna gum trees from the boardwalk. At first, it was discouraging because the critters were high up in the canopy. All we could see were furry balls—their bottoms, their faces if they were turned just right. Further along the path, they were much closer, enough to utter our “awws” and take pictures. The irony is that man’s intervention was required to see them. 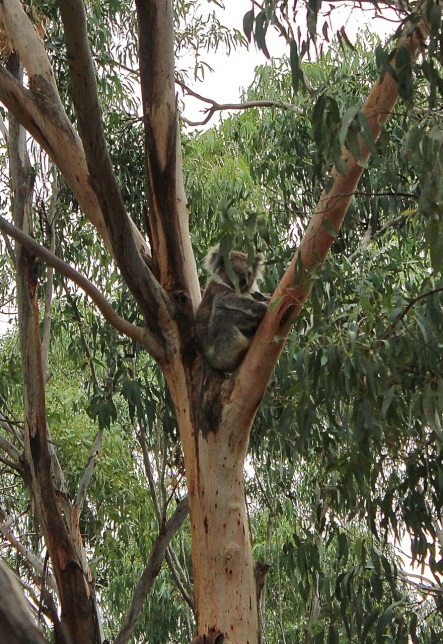 Phillip Island is a major tourist attraction that features little penguins, the smallest of the world’s seventeen penguin species, endemic to Australia and New Zealand. Aussies refer to them as fairy penguins, a reference to their diminutive size, no more than a foot tall. Kiwis call them blue penguins for their blue and white feathery coat. The “penguin parade” happens right after dusk when the penguins return to their nests after spending the day foraging at sea. Their homes are no more than burrows in the ground. Grandstands built right on the beach let visitors watch them waddle by, as close as a few feet from the boardwalk. Photography is no longer allowed. The inimitable Richard Attenborough shows us instead.

Fortunately, these penguins don’t seem particularly perturbed by human presence, but they are much more wary of predators introduced by Europeans, particularly foxes that can feast on as many as 40 chicks in a day. Tally ho!

As we approached the reserve before the program as well as while we waited in the grandstand for the penguins to come ashore, we finally caught glimpses of wallabies, which have naturalized in this area, hopping along the tussock and beach. So, I might’ve been a little disingenuous when at first I said that we saw no roos, technically speaking. 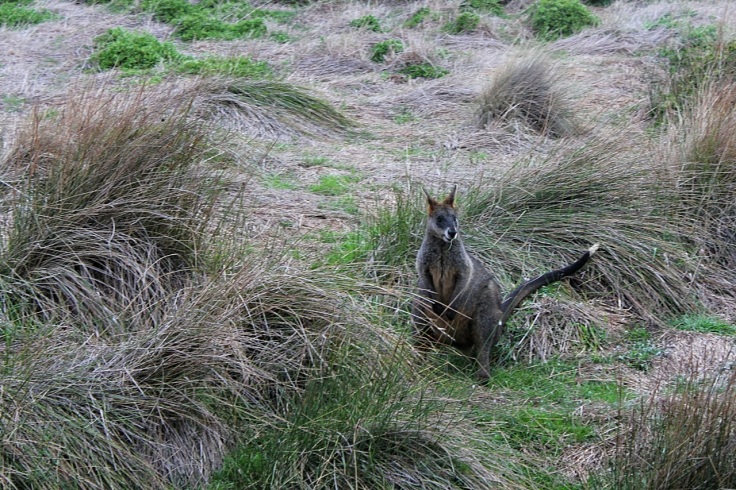 If, at some point in our travels, we decide to trek into the Australian bush, I’d wager that our chances would be good at spotting indigenous marsupials. But, not so much in the comfort and isolation of the Grayline bus to Phillip Island with on-board wi-fi so we can watch YouTube videos of them on our tablets, smart phones and laptops. Isn’t it grand to be out in nature?