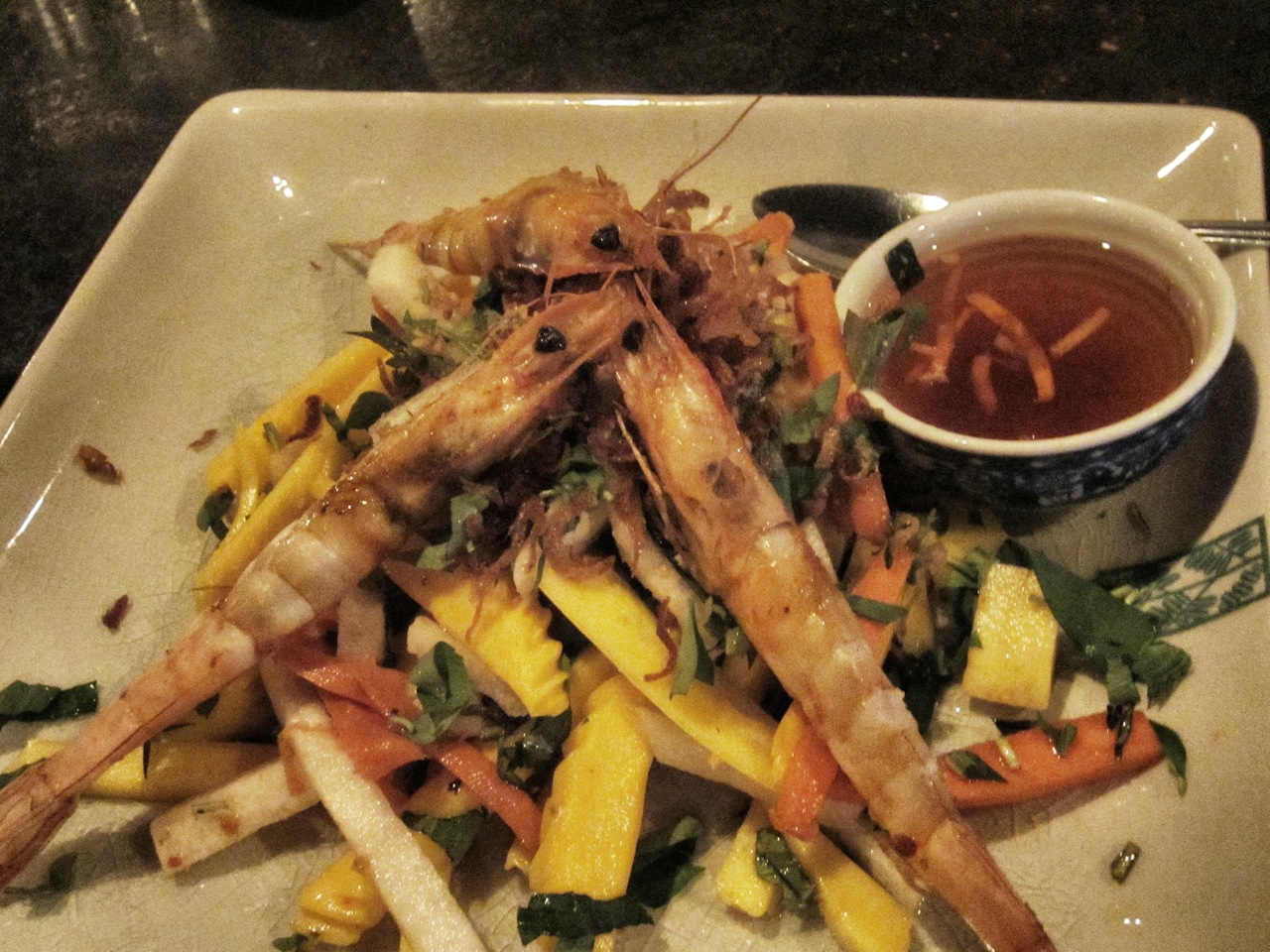 Is it possible that Tamarind Tree is the best Vietnamese restaurant in Seattle? One might be tempted to say so after patronizing it.

And why is it that it doesn’t come up in culinary conversations as much as, say, Green Leaf, which many do regard as without equal in these parts? One reason could be its location where the parking is always dreadful, the restaurant obscured from view atop a steep driveway just off Little Saigon’s South Jackson Street. The parking lot is ill-designed, slapdash, a pain-in-the-butt. Tamarind Tree has been doing business in the same place for many years. I’m embarrassed to say that 2005 was our last visit, three times! Had it not been for friends who took my wife and me there for dinner tonight, the pitiful streak may have gone on indefinitely. My wife and I did, however, enjoy equally fine food at Tamarind Tree’s sister restaurant in downtown Seattle, Long Provincial, in 2010 and 2011, the last visit with the same friends with us tonight.

As soon as you walk through the front doors, the tastefully decorated and appointed interior is in stark contrast to the strip-mall hodgepodge outside. Even in midday, it’s dark inside though not in a bad way, subtle lighting giving enough illumination to read the menu. We got seated next to an indoor gas fire pit. The radiated heat from the towering flames made us too warm.

Though we ordered green papaya salad, what arrived instead was a regular papaya salad that didn’t appear on the menu. That the salad was different didn’t dawn on us until later, still a good version (☆☆☆) topped with nicely grilled shrimp. With a bamboo skewer running down its length, the entire shrimp with carapace and abdominal segments still attached was meant to be eaten, shell and all. Not being keen on eating the head, I pulled it off and ate the rest. The sliced papaya, beautifully scored on the outer surface, jicama and carrots provided nice crunch and minced basil and fried shallots added their distinctive flavors.

Next to arrive was chili chicken lemon leaves (thịt gà xào xả ớt), looking like a plateful of sauced boneless chicken thighs. These were savory, garlicky and sweet with herbal and citrusy lemongrass notes (☆☆☆).

Bún chả Hà Nội is always an impressive presentation, a platter with a deep dish of meats, rice noodles and a garden of lettuce and herbs. Using whole green lettuce leaves as wrappers, you’re encouraged to place a small amount of noodles in the middle and add slices of grilled pork (thit nướng̣), pork patties (cha nướng̣) and herbs (Thai basil, mint, perilla leaves), roll the whole thing up, dip into nuoc cham and eat. The sauce served with the meats is good enough to eat by itself, almost like a boldly seasoned gravy. This was an outstanding bún chả (☆☆☆☆).

A vegetarian clay pot may not seem to hold out much savory promise, but La Vang pot rice (cơm kho thố La Vang) was quite a revelation (☆☆☆½), courtesy of three kinds of mushrooms (oyster, shiitake and tree ears). The rice dish was further enhanced by braised tofu, carrots and daikon radish (in place of the menu’s chayote squash), altogether a special vegetarian dish.

Grilled eggplant (cà tím nướng) had not yet arrived when we were well into the spread before us, so we were hoping that the waiter forgot to write it up. He hadn’t. It takes the kitchen longer to make the dish. There were five slices of grilled, charred Chinese eggplant (☆☆☆½), soft and silky, sprinkled with chopped peanuts and green onion. What was amazing still was yet another outstanding dipping sauce, sweet, savory and spicy like nuoc cham but sharing the eggplant’s appealing smokiness.

The four of us couldn’t possibly finish the magnificent feast. It did convince me though that Tamarind Tree’s Vietnamese kitchen is one of the best in town and that the restaurant deserves our returning more than sporadic visits once in a long while.