I was seriously bummed when Omar al Khyam in Renton closed its doors. I had been going there since my early working days in the Seattle area. It was my first introduction to Lebanese food and I loved it. Here is where I had my first hummus, baba ghanouj, shish tawouk, tabbouleh. I would have these over and over again through the years. Lebanese cuisine makes liberal use of vegetables, olive oil, garlic, lemon juice, spices and herbs, which explains much of the appeal to our family. So, when Omar’s decided to call it quits, I began to wonder when I’d have good Lebanese food again.

Recently, my daughter mentioned that a new Lebanese restaurant took over the spot previously occupied by Gabriel’s Fire, which served barbecue, and that word has been good about their food. Located in Loyal Heights (a subdivision of Ballard), she and I went there for dinner tonight. Even without a reservation (and one is probably recommended), we were seated immediately. The interior is simply decorated—white walls accented with paintings and textiles. The tables are covered in white linens though there is no air of stuffiness here. The whole place exudes warmth and hospitality. The restaurant is Chef Rajah Gargour’s attempt to serve the foods he grew up with during his childhood in Lebanon. There is also a full-service bar, rather unusual in a Lebanese (let alone Mediterranean) restaurant, that boasts over 100 kinds of whisky.

As this was Sunday, it was the Chef’s Choice fixed price meal. Good enough. No wondering what to get. For $20 per adult, you get a spread of small plates, including a main entrée and dessert. The only thing we had to pick was the wine (not included), Chateau Ksara’s Blanc de Blanc (☆☆☆), a flavorful white blend of sauvignon blanc, chardonnay and semillon, made in the Bekaa Valley.

Six small plates arrived at the table, all of them prepared vegetables, Mediterranean food at its best. They were accompanied by four half slices of large, surprisingly thin pita bread, likely made in-house. Just these mezze themselves would have been enough for a light meal. Half of them do not appear on the menu, which represents a way for the chef to try new things on customers and possibly add to the permanent menu later.

One of the new dishes consisted of boiled and smashed russet potatoes simply dressed with olive oil and parsley (☆☆½). There wasn’t much seasoning here, but the potatoes were perfectly cooked. 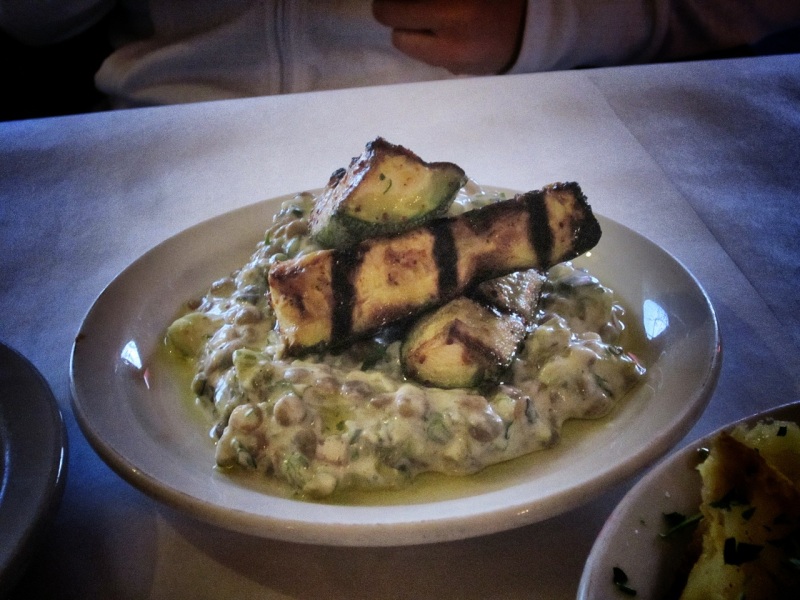 Another zucchini dish was dressed with olive oil, sliced radishes, feta cheese and parsley (☆☆☆). The combination of the cheese and olive oil gave it an intriguingly buttery taste. 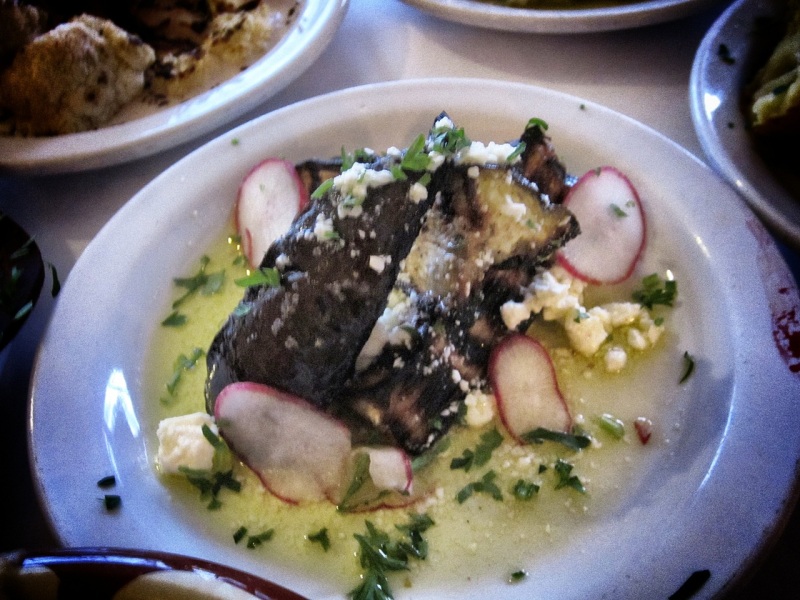 The remaining three mezze are on the regular menu. The grilled cauliflower (☆☆☆) is accented by olive oil, tahini and caraway seeds, sprinkled with fried onions, the crunchiest side dish of the night.

What appeared in the dim light to be a plate of carpaccio was instead Mandoline-thin slices of roasted beets (☆☆½), simply dressed with oil and vinegar. 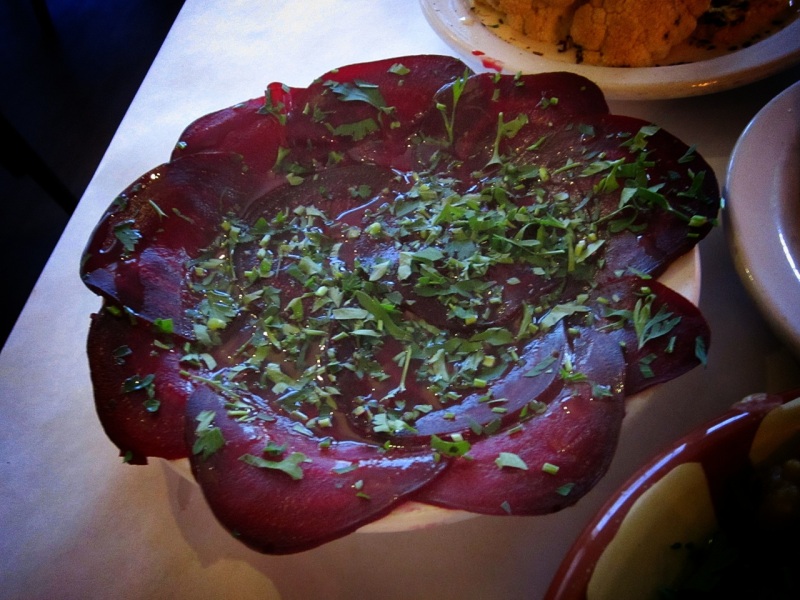 Hummus (hummos, as it appears on the menu), a staple in Middle Eastern cooking, comes in several forms, as the menu reserves a special section for it. The hummus (which literally means chickpeas) that most of us are familiar with is hummus bi tahineh. Another is hummus balila. Rather than being puréed, chickpeas are crushed, flavored with cumin and dressed with olive oil. Toasted pinenuts are sometimes added. Café Munir’s version (☆☆☆) was served warm with minced flat-leaf parsley and a lemon quarter.

Shish tawouk at Omar’s was one of our all-time favorite chicken dishes. Café Munir’s version (shish taouk) at first looked like single strips of chicken breast on a skewer, but in fact were several pieces snugly pressed up against one another. Nice grill marks heightening the appeal, two skewersful resting on a half pita bread. The lemon juice marinade brightened the chicken, which were extraordinarily tender and salty, suggesting a longer than appropriate brining time. A little tub of whipped garlic paste (toum) is a must with tawouk. A wonderful dish (☆☆☆½).

After the meal, there is the certainty that one has eaten well—and healthily. After all, the cornerstone of Mediterranean food is plenty of fresh vegetables, fruits, nuts and grains, with animal protein making up only a small portion. The spirit behind mezze is to share food with family and friends, with maybe a quaff or two of the Lebanese anise-flavored arak, of which Café Munir has a half dozen kinds. Café Munir is worth returning to often. And I can once again look forward to good Lebanese food.

I wanted to bring my wife here so she could experience the food as my daughter and I did this past Sunday. Opportunity knocked as we had a previous engagement at Northgate Mall, only a few miles away. With our daughter again, there were three of us for dinner.

We decided to follow the same pattern of eating Mediterranean-style by ordering lots of vegetables and a single meat dish.

The only dish we ordered that was common between the two visits was the grilled cauliflower with tahini and caraway (karnabeet mishwiyeh).

My personal standard for baba ghanouj is the one that Omar al Khyam in Renton served (now closed for business as mentioned above). Munir’s (baba ghanoush) (☆☆½) was chunkier, less smoky, and sweeter with a touch of tartness, probably from lemons. The sweetness may have derived from pomegranates, a quality that I found slightly distracting.

Another Mediterranean classic is lebneh (labneh)—strained yogurt cheese. Judging from its mildness, tonight’s lebneh bi zaatar (☆☆) was made with cow’s milk. A tangier yogurt might have been more interesting. It was liberally sprinkled with za’atar, a popular Middle Eastern herb mixture, sometimes with sesame seeds added (as Munir’s was). This was a rather bland dish, though it is essentially yogurt, as my daughter pointed out. Even the za’atar lacked potency.

Among the list of savory pastries is one filled with eggplant, almonds and spices, called fatayer bi batinjaan (☆☆). These triangular morsels were pretty but unremarkable.

What sounded intriguing was mukhaddara (☆☆½), a mince of roasted poblano pepper, pistachios and mint. It had the mild spiciness of the chile, but was otherwise somewhat lackluster for such an interesting combination of ingredients.

The highlight of the meal were the beef kebabs, two skewers served on a half pita. Lahem mishiwiyeh (☆☆☆½) were so tender that you scarcely needed a knife to slice the cubes. They were served with two mise en place cups of sauces, one of them a most delicious concentrate of sweet and savory tomatoes, almost a paste requiring some effort to scoop. For two meals, the grilled meats were what we all complimented the most. 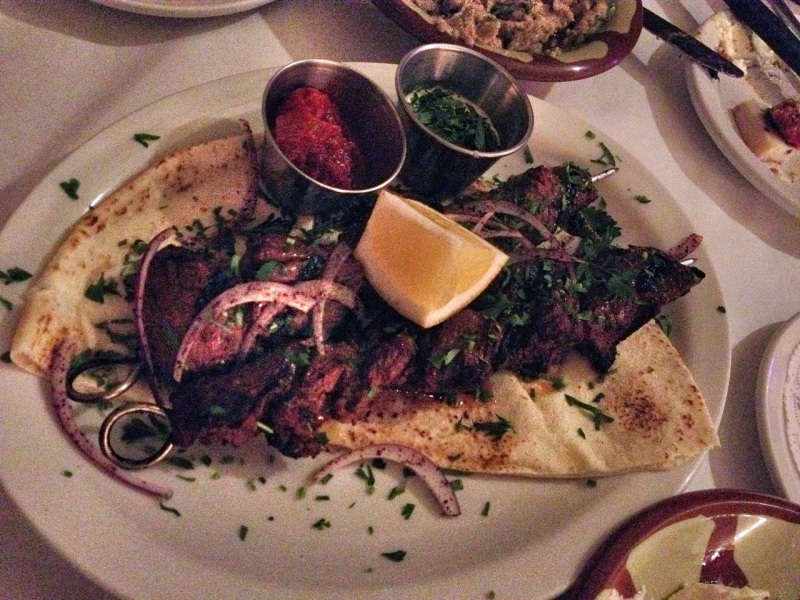 The best of the small plate was poached figs and coriander cheese (☆☆☆), which had very interesting contrasts: winey, sweet and seedy figs paired with a hard cheese studded with coriander seeds. Very nice.

Our second visit to Café Munir was sadly not as impressive as our first. This is not to say that the food was not good. It was solid but just needed more inspiration.