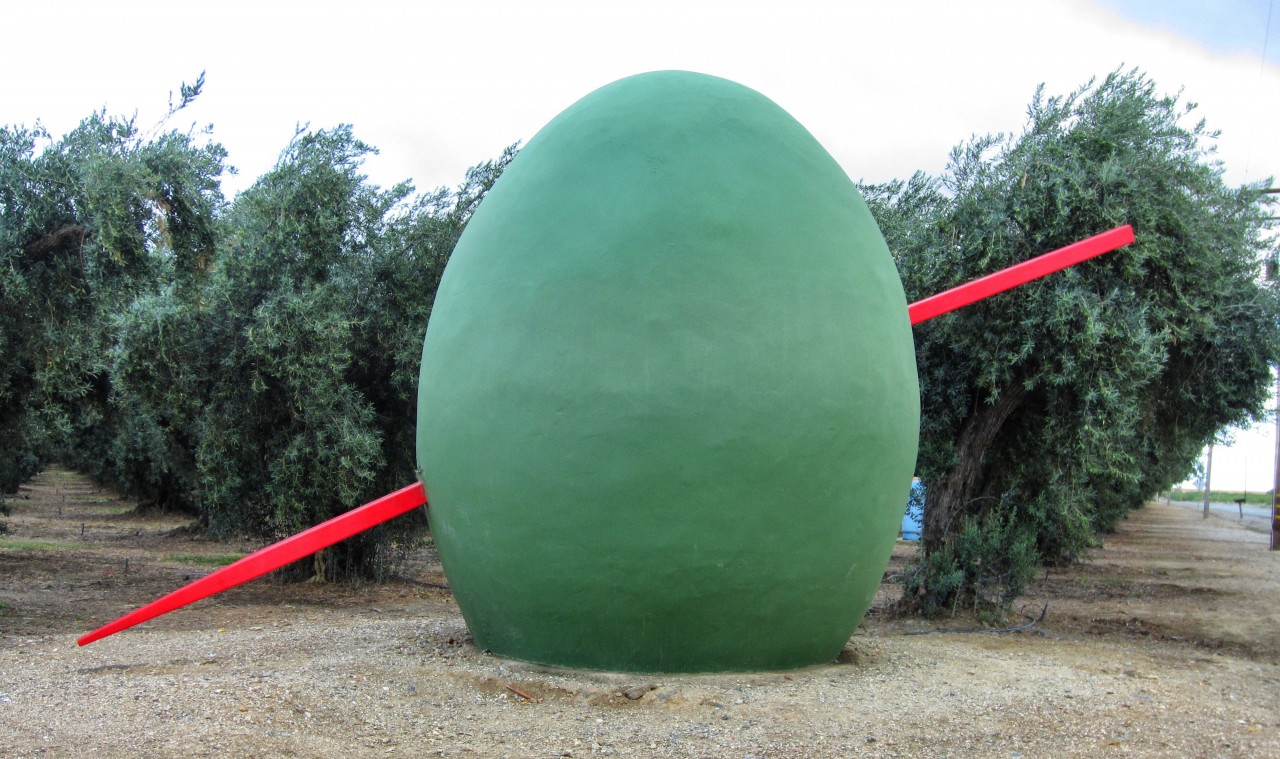 A giant replica of a martini olive sits on the corner of South Avenue and Hall Road in Corning, California. It isn’t someone’s idea of a practical joke but a symbol of the fruit’s importance to this part of the Sacramento Valley in California that produces olives and olive oil.

A visit to Lucero Olive Oil opened our eyes to an industry that is growing fast enough to be an important crop for the state. Lucero also happens to produce some of the best extra-virgin olive oils in the world, having won many competitions. The process for extracting the oil from the olive fruit is highly mechanized at Lucero, but as in winemaking, the role of the master maker is also very important. Despite the simplicity of how it sounds, the “cold-pressing” process for extra-virgin olive oil involves crushing the olives and pits into a mash and after kickstarting enzymes with a bit of heat in malaxers not to exceed 80oF, centrifuging the oil out in decanters. A few hardy olive varieties lend themselves to mechanized harvesting, but the fruit-picking is done manually for the most part to minimize bruising that could lead to oxidation. The tasting room lets you sample their oils, balsamic vinegars and tapénades and a factory tour can be arranged at the spur of the moment. Their oils had a range of tastes from mild to slightly bitter, with degrees of buttery, fruity and herbal notes. It was explained to us that the peppery finish in oils depends on variety, but more so on how mature the fruit is when picked, the greener ones exhibiting this characteristic.

The area between Corning and Red Bluff are full of olive tree orchards, which can easily be seen along the many roads throughout the valley.

In nearby Vina, a community of Cistercian monks live in a monastery, the Abbey of New Clairvaux. The brothers also have a winery that produces award-winning wines, a tradition that dates back to Europe. There is a tasting room where we sampled a pinot grigio, viognier, albariño, barbera, petit sirah and a port-like vino dolce, a bottle of which we purchased.

As you approach the winery, you can’t help but notice a Gothic-looking building on the grounds. The history behind its construction (or reconstruction) is very interesting, involving a thirteenth-century Cistercian abbey, William Randolph Hearst, and Golden Gate Park in San Francisco. In an attempt to build an estate that would surpass San Simeon, Hearst purchased a ruined chapter house of Santa Maria de Ovila, an old Cistercian monastery in Spain, as part of the project. The building was dismantled, piece by piece, and brought to the Bay Area. The advent of the Depression disrupted this plan and the stones eventually donated to the De Young Museum of San Francisco. The stones were left unattended in Golden Gate Park for many years where they were vandalized and generally lay in ruin. In 1994, the stones were granted to the Abbey of New Clairvaux, which has incorporated the stones to build a new chapter house, a replica of the original Spanish structure.

Cistercian architecture is known for its simplicity. The symbolism of its vaulted ceilings and windows are considered divine. Some aspects of the design use the golden ratio, often embodied in esoteric works of art.

In Corning, the Olive Pit sells all manner of olive products, more than I had ever seen anywhere.

For dinner, we took advantage of half-price senior buffets at the local Rolling Hills Casino, operated by the Nomlaki tribe.